Picture books, fiction and nonfiction, change the way you see everything.  I mean EVERYTHING.  They throw the doors to imagination and information wide open.  They insure we see the big picture and the teeny-tiny details others might not notice.  They heighten our senses and super charge our emotions. 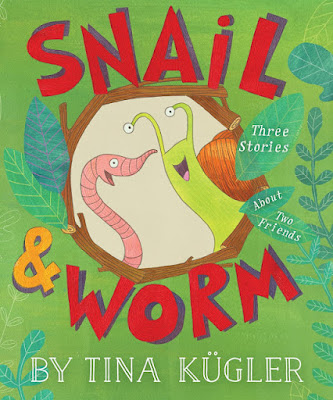 You will find yourself looking above, to the right and left and below your line of vision. If you listen closely, kneeling down in the grass or dirt, you might hear surprising things.  Snail & Worm: Three Stories About Two Friends (Houghton Mifflin Harcourt, May 3, 2016) written and illustrated by Tina Kugler is a collection of satisfyingly silly conversations.

Snail is speaking to a gray lump happily requesting participation in a game of tag.  We know before Snail does who the winner will be.  As slow as snails are, they are much faster than a stationary stone.

When Worm pops out of its hole to inquire whether Snail is chatting with a rock, Snail actually names it Bob.  Continuing the nonsense, Worm names a stick as if they are best pals, too.  Snail's final statement even dumbfounds Worm.

When these two down-to-earth crawlers meet again, Snail is contemplating a lofty quest with Worm offering encouragement.  New heights are reached and perspectives shift although gravity plays a big part.  Again the last words are Snail asking a you've-got-to-be-kidding-me question.

Worm's pet is missing.  As every physical attribute is described to Snail, who wants to help find the absent critter, they all add up to a very scary spider.  When Worm's pet is revealed and in turn, Snail's Rex, Snail delivers the final dose of hilarity.


Told entirely in dialogue Tina Kugler has her readers' attention from page one and keeps it until the closing words.  Her simple, straightforward sentences are brimming with cheerful goofiness.  In between our giggles and guffaws, one thing is perfectly clear.  These two friends are a perfect pair.  Here is another sample passage.

Wow.
Look at
that
tall
flower.
That is a tall flower.
I want to be
tall, too.
I wish I could
climb
to the top
of that flower.
Do you think
I can?
I am so small.
The flower is very,
very tall.
You can do it!


Rendered in acrylic on pastel paper, collage, and digital media the illustrations beginning with the dust jacket (I am working from an F & G) supply readers with a feeling of complete elation.  The opened jacket displays a full image set in a grassy landscape.  On the title page Snail and Worm are again framed in sticks above the title text in red and golden yellow with a design of leaves on the outer edges.  The brilliant green hues with the bright splashes of red along with pink, brown, gray, purple and a little bit of yellow are used within the interior pages.

For each of the three stories, Tina Kugler places the title on an opening scene.  The size of her pictures, surrounded by ample white space, enhances and controls the pacing.  Her illustrations vary in shape from full page squares, to groups of vertical visuals, ovals, small clusters of squares, circles and rectangles, two large double-page pictures and shapes mirroring leaves.

The portrayals of Snail and Worm are fully animated.  With the slightest curve of a line indicating body posture and expressions around both their mouths along with the placement of dots for eyes, readers are fully aware of their moods and thoughts.  You will find yourself laughing often.

One of my favorite illustrations is when Snail meets Worm's pet.  On a white background are several plants along the far left edge.  Worm is peeking through its hole in the grass on the same side wearing a big grin while speaking.  On the right Snail is looking up in welcoming appreciation replying in kind.  The pet looms over Snail equally happy.


Young readers are not going to be able to read Snail & Worm: Three Stories About Two Friends written and illustrated by Tina Kugler without getting caught up in the hilarity.  (I still chuckle after several readings of all the stories.)  The remarks and observations by these two are absolutely ridiculous.  I guarantee with friends like Snail and Worm you can always count on your days being filled with delightful comedy.

To learn more about Tina Kugler please follow the link attached to her name to access her website.  You can also read her blog and the Studio Kugler site from there.  Tina Kugler has created a series of fun activities to go with this book.  On Scholastic's Ambassador for School Libraries, John Schumacher's blog, Watch. Connect. Read., Tina Kugler revealed the cover for this title as well as offering comments about the contents.  UPDATE:  Tina Kugler is interviewed at KitLitArtists, June 20, 2016.