There will be those beings that look at life through a different lens than others.  They will not conform.  They take common everyday objects redefining them; a leaf floating along the gutter of a street becomes a boat for an earthworm king, flower blossoms are homes for fairies and ladybugs or tiny girls named Thumbelina, butterflies are messengers, a jar lid is a swimming pool for slugs, and a piece of paper shifts shape becoming a crane.  Their imagination fuels their creativity.  They are the dreamers and the doers. 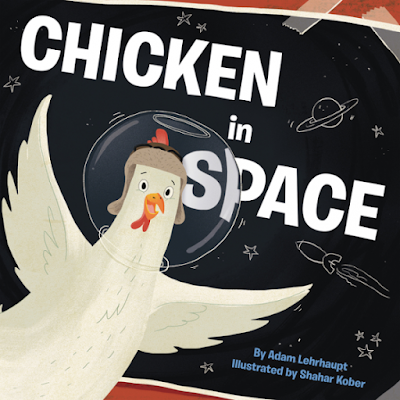 If we were to wander into a particular farm we would meet an extraordinary member of the local community.  Chicken in Space (Harper, an imprint of HarperCollinsPublishers, May 17, 2016) written by Adam Lehrhaupt with illustrations by Shahar Kober is about a fowl with a fantastic future.  This bird has her barnyard buddies buzzing.

You won't find this gal clucking and pecking inside or outside the coop. There will be no grass growing under her feet.  She struts with determination.  An adventure is taking shape in her mind; a scheme of epic proportions.

Her loyal pal, a pie-craving pig named Sam, accepts her invitation but his stomach is rumbling for dessert. As Zoey passes by her other country companions she makes the same request.  Each with proper names, a dog, a mouse and a cow, decline her offer with a variety of excuses.  They are content, wary of danger and puzzled by Zoey's proposal.  How is this duo going to get into space?

Never fear when Zoey is near!  Using materials at hand she builds a vehicle which lifts them up, up and up higher still.  In her mind the everyday becomes something else entirely.  She sees exquisite views.  Sam's looking for pie.  Zoey is in full-blown astronaut mode.

Items whizzing past them are given cosmic identities.  As their trip comes to a quick close courtesy of aliens, the friends find themselves with different opinions as to their success.  When the teller tells their tale a twist or two will leave readers smiling.

For my parents,
who always encourage me to follow my dreams,
no matter what they are

you know you are about to open a gift.  The first four simple sentences are brilliant in their pacing; narration leading up to the first conversational exchange between Zoey and Sam. By the time Zoey and Sam are about to embark on their voyage, we are keenly aware of the chicken's outlook on life.  She is most definitely a glass-half-full kind of individual.  Lehrhaupt's mix of dialogue and narration is top-notch. The pig's persistent desire for pie adds a distinctive element of comedy.  Here is a sample passage.

When you open the matching dust jacket and book case you can see the entire image spanning from left to right.  The four farm friends are gazing with curious expressions at Zoey.  Filled with glee, she is ready to go according to a plan taped to the side of the barn.  On the opening and closing endpapers fine line drawings of chickens in various sizes and poses create an overlapping pattern.  Zoey is drawn with red wearing her hat and goggles, looking as if she could enter space without any ship at all.  The dedication, verso and title pages feature a single picture of Zoey, seated on a hillside, looking up at the title text in large block letters over the farm.  There is a tiny clue of events to come tucked into the scene.

Rendered digitally in Adobe Photoshop Shahar Kober brings energy to his characters in their facial expressions and body postures.  We are well aware of their emotional state in every single visual.  Comical details add to the pizzazz in the pictures; the satellite dish and antenna on the chicken coop, the hats worn by Zoey and Sam, and the eyeglasses on the mouse.  The majority of the illustrations span two pages with shifts in point-of-view enhancing the uplifting spirit in each one.

One of my favorite illustrations is when Zoey grabs Sam placing him in her newly created "spaceship.  The looks on their faces are completely different.  Zoey is brimming with happiness.  Sam is decidedly looking startled.  We are very close to the action.  Off to the right, farther away and smaller in size, Pip, Henry and Clara are watching.

If you are looking for a story full of cheerful optimism Chicken in Space written by Adam Lehrhaupt with illustrations by Shahar Kober is the perfect title for you.  Nothing is going to dim the exuberance of this character in the pursuit of whatever she decides to do.  Sam is more than willing to go along for the ride if pie is involved.  He is also one of Zoey's most steadfast supporters.

To discover more about Adam Lehrhaupt and Shahar Kober and their other work, please follow the links attached to their names to access their websites.  At Watch. Connect. Read. the blog of Scholastic's Ambassador for School Libraries John Schumacher, the book trailer is revealed along with a conversation between John and Adam.  Adam Lehrhaupt is a guest at The Hiding Spot, a blog hosted by Sara Grochowski.