There is something a bit mysterious about wading through waist-high weeds in a vacant lot, jumping across stepping-stones in a stream and building lean-to forts in nearby woods when you are a younger gal or guy.  If there is no one else around you can easily imagine yourself to be the first person to make new discoveries.  In the seconds of a single thought you are in a place far removed from home. 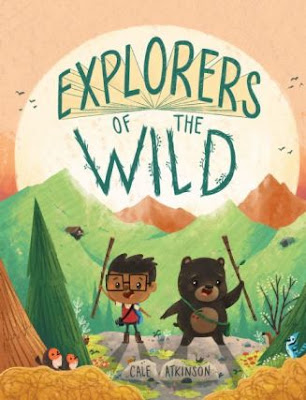 Moving slowly you listen, look, smell and touch as if you have entered an alien world. Explorers Of The Wild (Disney Hyperion, April 26, 2016) written and illustrated by Cale Atkinson (To The Sea, Disney Hyperion, June 2, 2015) follows two individuals roaming through a nearby forest.  They are seeking but not sure what they will find.

I love to explore!
It's my favorite thing to do!

Two narrators are expressing their excitement to readers.  They are in separate sections of the same woods.  One of them gets down low to see new sights.  The other lifts and looks beneath a large log.

Care is taken by both as it darkens in the denser areas, tree tops blocking the sunlight.  They each remember words of caution from their parents.  Like masters of their profession, explorers, they are ready for whatever happens.

As they scamper and tumble around, running along as fast as they can, they both suddenly stop.  A boy has met a bear.  A bear has met a boy.  YIKES!  They are both shaking down to the tip of their explorer toes.

When the reality of who they are is replaced with the pursuits they have in common, the fun escalates.  No matter the size of their find, together makes it better.  This day is a day to remember.


The feeling of anticipation when you set off on a new adventure spills from the pages of this book.  Even though the explorers are a boy and a bear Cale Atkinson skillfully portrays the emotions and actions they both enjoy with similar enthusiasm.  The intended audience will see themselves in each sentence (and so will older readers as they recall their pasts).  Each phrase that speaks to their eagerness builds toward the screeching halt in their activities.  When they resume together Atkinson raises the level of their happiness.  You want to cheer for this twosome.  Here is a sample passage.

My parents tell me to be careful.
They say you never know what
you'll run into in the wild.
I say I'm an explorer
and explorers are prepared for anything.


On both the back and front, left and right, of the opened dust jacket Cale Atkinson portrays the boy and the bear together.  On the right this scene foreshadows their shared affection for exploring the outdoors.  On the left Atkinson has created another new scene of them first seeing each other.  They are peering around a grassy hill as a mother robin and two baby robins in a nest watch them.  In each image tiny creatures of the woods are observing the boy and the bear.  Atkinson introduces readers to the color palette he uses throughout the title on the dust jacket; the rich greens and browns with spot color for the flora and fauna of the forest and the duo's attire.

The book case is a composition book in a darker green.  It's definitely showing signs of wear and tear.  The label on the front has been crossed out to reflect the title and characters in the book.  The title text on the front and a drawing of animal tracks on the back have been taped to the cover.  An identical opening and closing endpapers feature a wonderful, childlike (one of the best I've seen) maps of the day's adventures; to name a few places, ELEPHANT ROCK, THE CAVE MAZE, MOSS VALLEY, WATCH OUT FOR SLUGS!!, BIGGEST TOAD IN THE WORLD and POISON IVY! The map is drawn on lined notebook paper.

The illustration on the title page is a blend of the boy and the bear looking in two different places in the woods.  Other creatures are sharing the space with them.  Until the two discover each other, Atkinson cleverly has a tree going down the center of the gutter to separate the actions of the two but make it appear as if it is a single picture.

For the following eight pages a single visual spans two.  Then masterful design joins smaller illustrations together with a stream, a log, a tree, and dotted lines for a path.  This pattern is followed somewhat in reverse as the two go back to their homes at the close of the day.  The exuberance the fellow explorers experience separately and together is fully depicted in their facial expressions.

Many, many of these illustrations could be a favorite.   One of them is when they recognize they are explorers.  It is a double-page picture.  On the right the boy and the bear are standing side by side, feet spread apart, a hand on a hip and another holding a walking stick.  Trees and flowers are spread before them as a bunch of butterflies fly around them.  (Butterflies have always meant change to me, so I really like seeing them here.)


Explorers Of The Wild written and illustrated by Cale Atkinson is a book for everyone of all ages.  It reminds us to get outside to discover all things big and small.  Shared experiences are better with like-minded people.  And a new day holds the promise of new adventures with a new friend.

To learn more about Cale Atkinson and his other work please follow the links attached to his name to access his website and his Tumblr pages.  Cale Atkinson is a guest at All The Wonders, Episode 255 talking with teacher librarian Matthew Winner.

Just put up my printable explorer Discovery Journal on https://t.co/S0c0uy8TbT! Anyone care to test it out? 🌲 pic.twitter.com/kVDs2RvwZI
— Cale Atkinson (@2dCale) May 11, 2016

What's the process of creating an EXPLORERS OF THE WILD spread? well something like this:🌲 @DisneyHyperion #kidlit 🐻 pic.twitter.com/xOjc3WPdUw
— Cale Atkinson (@2dCale) May 9, 2016

Curious what EXPLORERS OF THE WILD looked like in the beginning? 🐻 Well, it looked like this -> #kidlit #process pic.twitter.com/Cotm8pk6h9
— Cale Atkinson (@2dCale) June 1, 2016