Survival Of The Most Intelligent

When a plan is in place, preparations are made to support it.  Every action taken focuses on the goal.  We all know though, plans, preparations and actions combined do not always equal the desired result.  Mother Nature has a way of throwing the proverbial monkey wrench into the mix. 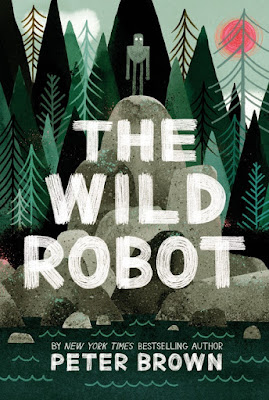 Rain cancels picnic feasts, blizzards cancel a day on the slopes and too much sun cancels a hockey match on the neighborhood pond.  In his debut middle-grade book Peter Brown (Mr. Tiger Goes Wild, My Teacher Is A Monster!: (No, I Am Not.)) begins with weather on the rampage.  The Wild Robot (Little, Brown and Company, April 5, 2016) is first a story of survival but each chapter broadens and deepens the very definition of the word.

Our story begins on the ocean, with wind and rain and thunder and lightning and waves.  A hurricane roared and raged through the night.  And in the middle of the chaos, a cargo ship was sinking.

Aboard this ship was a load of crates; each filled with a single robot.  In the morning the only sign of the ship was five floating crates which traveled until a small rocky island was in sight.  Only one was lifted by waves undamaged to a safe position on the shore.

Poking about the robot wreckage in the early light of the day was a group of sea otters.  They were unable to resist the shininess of the body parts and the damaged but intact crate.  In their eagerness to grasp the spongy protective layer inside the crate, one of them brought the enclosed machine to life.  And this began a tale like none other.

ROZZUM unit 7134, Roz, adapted as she was programmed to do. Her desire to survive first finally had her blending in as part of the flora, allowing her to learn from the animal inhabitants on the island.  At one of their Dawn Truce meetings she presented herself but the animals wanted nothing to do with her.  Not a one of them wanted to help or teach her.

A fox in need, an opossum with first-class acting skills and an orphaned gosling started to shift the animals' assessment of this uninvited resident.  In her endeavors to care for Brightbill, a name given to the gosling by the elderly goose, Loudwing, Roz made connections with the beaver and deer families.  Skills were traded with everyone a winner.  As the spring passed into summer Roz was assimilating more into the animal culture on the island as Brightbill adeptly, with his Mama's help, increased his goose swimming and flying abilities.

As autumn approached an unprovoked attack left Roz a little less herself.  Winter brought frightening challenges but the arrival of spring was celebrated until terror visited the island.  Edge-of-your-seat tension continued chapter after chapter as heroes were born.  As long as there was hope change for the greater good would be accepted.


As soon as chapter one is read, readers know this is going to be an extraordinary book.  The narrator, when speaking, directly addresses the readers personally involving us in this story.  We are privy through Roz's thoughts and the animals' observations and all the conversations, how this robot becomes not only a part of the community but vital to the survival of many members on the island.  Peter Brown through the character of Roz also directs our attention to respect for the natural world, how each species are integral, environmental concerns and the place and purpose of technology.

The technique of short chapters replicates real life; our day is composed of many linked moments.  Each one ends with a carefully crafted sentence, sometimes a statement of fact, but they encourage us to continue.  Vivid descriptions of the island help us to create pictures of the landscape in our minds.  We come to understand how the animal inhabitants live, die and survive.  The relationship between Roz and Brightbill evolves into a heartwarming bond; a beautiful blend of logic and love.  Here are some sample passages.

Animal sounds filled the forest.  Chirps and wingbeats and rustlings in the underbrush.  And then, from the sea cliffs, there came new sounds.  Heavy, crunching footsteps.  The forest animals fell silent, and from their hiding places they watched as a sparkling monster stomped past.

When Roz first stomped across the island, the animal squawks and growls and chirps had sounded like nothing more than meaningless noises.  But she no longer heard animal noises.  Now she heard animal words.

"Have you done any acting?" asked the opossum.
"I have not," said the robot.
"Well, you should!  You might enjoy it.  You can start by imagining the character you'd like to be.  How do they move and speak?  What are their hopes and fears?  How do others react to them?  Only when you truly understand a character can you become that character..."

Throughout the book Peter Brown has drawn images in black and white.  Their size varies according to the passage, point in the story, they enhance.  Each one evokes an emotional response in the reader.

One of my many favorite illustrations is inside the Nest.  There is no fire going at this moment.  Roz and Brightbill are facing each other.  Brightbill has just pressed the button.  The expressions on their faces speak volumes.


The Wild Robot written and illustrated by Peter Brown is a memorable, moving tale of survival, community and family.  Whether read silently and individually or as a read aloud, this book will be counted as a favorite of readers for this year and as a cherished title for many, many years to come.  No collection, professional or personal, should be without a copy.  Thank you, Peter Brown.

To learn more about Peter Brown and his other work, please visit his website by following the link embedded in his name.  The second of the two links takes you to the page describing the journey this book made until its publication.  To read an excerpt please stop by the publisher's website.  Peter Brown is interviewed at Publishers Weekly and at the Barnes & Noble BNKIDS blog.  Peter Brown is also a guest at All The Wonders, Let's Get Busy, Episode 247 with teacher librarian Matthew Winner.  You might want to listen to one of the chapters read aloud by following a link in one of the tweets.

@Loveofxena Thank you! I poured everything I have into this book. So so glad it resonated with you!
— peterbrown! (@itspeterbrown) May 11, 2016

As the sun set, my 9yo read WILD ROBOT by @itspeterbrown out loud to me while I planted grape vines. Not sure I've ever been happier.
— Dan Gemeinhart (@DanGemeinhart) May 2, 2016

@itspeterbrown Son loved THE WILD ROBOT. Only complaint: "I wish it were longer. I want to see what happens to Roz next."
— Linda Urban (@lindaurbanbooks) April 12, 2016

I chat up @itspeterbrown's THE WILD ROBOT, with a little help from my daughter.https://t.co/x3sdNpqOho
— Jarrett J. Krosoczka (@StudioJJK) April 6, 2016