In the realm of fairy there are villains in need of vanquishing...always. They plague the residents' pursuit of a life filled with peace.  One of the most haunting tales is of children wandering deep into dark woods.  Under the guise of goodness a wicked witch lures them lost and hungry into her home. 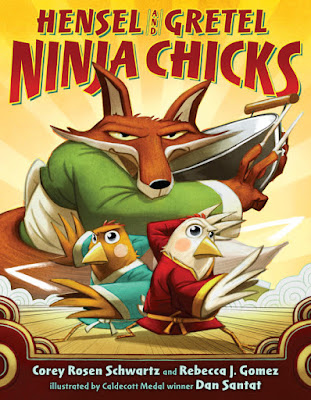 Once upon a menacing time
two chicks knew a fox was at large.
Their Ma had been taken
and Pop was quite shaken
so Hensel and Gretel took charge.

In the village dojo, they learned a new form of martial arts mojo.  Silence, shadows and stealth became their friends as they sought to bring this reign of terror to an end.  Imagine their dismay when they arrived home to find their father had been taken away.  Without a minute to waste, they hiked in great haste; leaving crumbs in their wake.

Feeling great fear and fright, discovering their morsels had vanished from sight, they wandered into the night until they saw a light.  Following the glow up ahead they discovered an abode made entirely of corn bread.  Little did Hensel know as she snacked, she was about to be attacked.  Once inside, she knew the vixen had lied.

In a cage Pop had been stuck and Mama was next to be plucked.  Finding herself behind bars, Hensel thanked her lucky stars for her lock picking skills.  In case you're wondering about good Gretel, knowing her family was in trouble, down the chimney she went on the double.  Mother and daughter combined their survival savvy giving the fox a fight.  Pop and Hensel helped to set things right.  Kiya!


Combining their warrior writing expertise Corey Rosen Schwartz and Rebecca J. Gomez create a story moving and grooving to a rhyming ninjutsu beat.  Elements of the original tale are deftly woven into this fractured version focusing on chickens and the foul fox.  The dialogue blended with the narrative is dynamic creating tension and comedy at the same time.  Here is a sample passage.

She gasped, and then dashed
to the corner,
where Pop was confined in a crate.
"Watch out!" Papa cried.
"You'll be
chicken-pot-pied!"
She sidestepped,
but it was too late.


When opening the dust jacket, to the left, on the back, readers see a canvas in the same hue as seen on the title text on the front.  In a diagonal panel the fox is pictured engaged in battle with the two chicks, one kicking outside the lines of the frame.  We read the words

Is that witchy fox ready for kung POW chickens?

On the front the no-nonsense expressions on the faces of the chickens and fox and the body stances on all of them foreshadow the events to come; wok in hand the fox will fight for food and the chickens are determined to do battle to spare everyone's lives.  The opening and closing endpapers feature first the coop-like residence of the chickens sitting in a clearing surrounded by the forest.  At the back, in a more mountainous setting, the fox's house awaits the arrival of some unlucky soul, smoke rising from the chimney.

Rendered throughout with Sumi brush work on rice paper and completed in Adobe Photoshop Dan Santat visually begins the story with a two page image on the dedication, verso and title pages; Pop, Hensel and Gretel, worried and wary, are walking to the gates of their town.  A BEWARE sign, with a fox on it, is hanging on the gate.  Nods to the two previous books are seen on buildings as the trio approach the dojo.  Santat's perspective in these first two large illustrations draws our attention directly to the main characters.

Many of the remaining pictures spread across two pages but Santat places pictures within pictures as the action dictates.  Even his single page pictures flow across the gutter forming a wonderful whole. The color palette reflects the time of day along with the correct emotional atmosphere.  Each scene is vivid and vibrant, especially the fighting segments.  There is so much energy in his images they embrace you. You'll believe you can hear voices and sounds.

One of my favorite illustrations spans two pages.  Within this picture we see the passage of time and the journey Hensel and Gretel take through the forest.  Clothed in their ninja clothing they move with caution through trees, across a bridge near a waterfall, along a mountainous path and carefully approach the light seen through the trees on the right toward the bottom.  The layout and design fashion a feeling of motion.


Hensel And Gretel Ninja Chicks written by Corey Rosen Schwartz and Rebecca J. Gomez with illustrations by Dan Santat is fairy tale fun full of twists and turns.  When the words are read aloud with these images, your listeners will be ready to assume positions in defense of whatever scoundrel skulks into view.  This is one of my favorite Hansel and Gretel variants.

To learn more about Corey Rosen Schwartz, Rebecca J. Gomez and Dan Santat and their other work, please follow the links attached to their names to access their websites.  The trio can be found on Twitter at @CoreyPBNinja @GomezWrites and @dsantat  Enjoy the book trailer.