Two Halves Beating As One

When book nerds take a break it's a safe assumption reading will be involved.  Sometimes a couple of chapters stretch into an hour.  The task at hand is resumed but completed as quickly as possible so the reluctantly-paused reading can begin again.  An evening vanishes as well as most of the following morning until the final word is read.  In less than twenty-four hours a two hundred thirty-four page book is consumed. 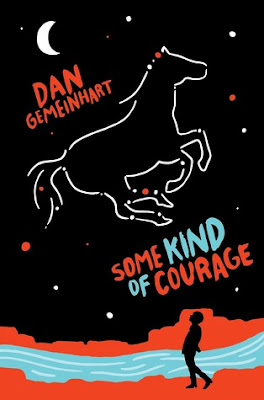 I reckoned it was the coldest, darkest hour of the night.  That still hour just before dawn.  Mama always called it the "angels and devils hour," on account of how only angels or demons would have any work worth doing at a time like that.

Twelve, nearly thirteen, Joseph Johnson is about to embark on a perilous journey but first he needs to escape the horrible clutches of his ne'er-do-well guardian, an avid fan of alcohol and plain questionable living.  Joseph aims to take the money and a gun.  Before you jump to any conclusions, the money was attained when Mr. Grissom sold Sarah, Joseph's horse, without his knowledge and the gun belonged to Joseph's deceased papa.  It's more than a little tense when Grissom wakes from a drunken stupor but the young man prevails determined with every fiber of his being to get his beloved pony back. Now he just has to track down the devilish scoundrel, Ezra Bishop, more thief than honest horseman who has Sarah.

Several early morning encounters bring him sadness and thankfulness in equal measure as he heads toward the nearest town, Wenatchee.  There, at the trading post, he befriends a Chinese youth about his age, "Ah-Kee", lost and alone.  Through Joseph's acts of kindness, the two head south out of town following the Columbia River in pursuit of what they love the most, neither understanding a word the other says but instinctively knowing they are better together.

Each day brings them sometimes closer, other times farther away from their individual goals.  A wake-up bathroom break is prelude to a too-close for comfort meeting with an angry grizzly.  They've hardly had time to recover from this when the next morning hearing calls of distress they offer assistance to a Native American youth, older and larger than either Joseph or "Ah-Kee" and his younger sister.  A race does result in them no longer having to travel on foot.  Their arrival in Ellensburg brings them heart-stopping near to death for the second time completely altering their plans.

Mother Nature levels huge distractions on the boys not once but twice where death and life hang in balance for them and others they meet in their further travels toward the town of Yakima. (By now I've had a map out following along with the duo.)  A parting of ways, a terrifying ride, and the ringing of gun shots will literally cause your heart to pause.  So will the conclusion.


As soon as I read the date and location on the first chapter page, I knew I was in for a wild ride back into the West. Within two paragraphs readers are transfixed by Joseph's situation.  This is the second paragraph.

I'd been lying too many sleepless hours in my sorry straw-stuffed bed, waiting for the old man to finally fall asleep.  My plan had been burning all night in my mind like the last glowing embers in the fireplace, keeping my heart awake.  Truth be told, my hands were a bit shaky as I finally crept, as quiet as could be, across the cabin's dirt floor toward where he lay snoring.  And it weren't just the cold making 'em shake, neither.  But my heart was as steady as a true horse, heading toward home.

This writing style supplied by Dan Gemeinhart gives us two things:  valuable insights into the character of Joseph and his dilemma and a vivid picture of his surroundings.  We are unquestionably captivated and compelled to keep reading.  He has a knack for ending and beginning chapters with white-knuckle sentences.

Throughout the story dialogue and first-person musings attach us to Joseph.  We cheer for those in his favor and condemn those who wish him harm.  As Joseph meets people, characters either kind and caring, too gruff for goodness, nasty to the core or one in particular whose goodness pierces his evil demeanor in slivers, he is in frequent conversations with his conscience relying on the voices of his parent's teachings to help him make decisions.  These perceptions engage readers, encouraging them to speculate how they might react in similar positions.

Gemeinhart allows us to see how Joseph's trek is not only measured in miles but in the growth of his personality.  We, like Joseph, are not only shaped but the physical places in which we reside and visit but in the people who cross those paths.  Another technique employed by Gemeinhart is to reveal Joseph's past as he converses with "Ah-Kee".  The Chinese youth can't understand Joseph but his facial features and body posture imply compassion, putting Joseph at ease.  Here are three additional passages from the book.

"Angel feathers," I said quietly, watching it fall.  Ah-Kee looked at me.  "That's what my sister called it. Katie."  Saying her name out loud like that, after so long, made me want to smile and cry at the same time.  It made me feel a whole different kind of alone.  "When there was snow like this in the morning, I used to say it looked like sugar, like the whole world had gotten candied overnight.  But she insisted it was feathers from the wings of angels, flying around at night watching over people."  Ah-Kee sat there and listened with his solemn eyes.  I blew my breath out in a foggy cloud.  "Let's stoke the fire and eat some grub and hit the road."

The air was a deep kind of cold, the sort of cold that tells your bones that fall is ending and winter is coming right up behind it.  A mostly full moon threw its silver light on the snow-topped hills, the pines, the grass around the cabin.  Off in the distance I could hear the river, tumbling its way through the night toward Yakima.
I stood alone in the darkness. Well, with the moon it weren't all-the-way darkness.  But I felt sure enough all-the-way alone.
I wanted my horse back right then more than ever.

The ax head shined bright as a bullet in the morning light.  It glinted as it rose up, swift and deadly, then flashed as it came slicing down.  I grunted and gasped.


There is something for everyone in Some Kind Of Courage written by Dan Gemeinhart.  It's abundant adventure, total love of a horse for his boy and a boy for his horse, prevalent doses of how to decide right from wrong, inclusion of the discrimination against the Chinese and its introduction of persons residing in these particular Western settings, Native Americans, homesteaders, horse traders, agents, merchants and townsfolk, and outlaws, contribute to the excellence found within this historical fiction.  It's downright suspenseful and flawlessly heartwarming.

UPDATE:  Dan Gemeinhart is interviewed at Book Q & A With Deborah Kalb.