They ride school buses, walk the hallways, enter our classrooms, libraries and cafeterias and roam on our playgrounds.  These girls and guys are as beautiful as the other children but their distinctive individuality sets them apart from the others.  Their choices, perspectives and forms of expressions are a gift to others.  For whatever reason the gift though freely given is not readily received. 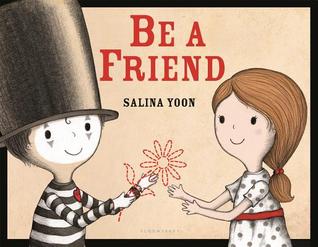 Be A Friend (Bloomsbury Children's Books, January 5, 2015) written and illustrated by Salina Yoon like these exceptional children is a present for her readers  It's a token to be treasured, representing the wisdom and worth of walking this planet with respect and appreciation for others.  It asks us to wear our differences seen on the outside and those we harbor inside with courage.

DENNIS was an ordinary boy...
...who expressed himself in
EXTRAORDINARY ways.

He was known as

Dennis never spoke.  He moved his body and changed his facial features to convey his thoughts.  He demonstrated without a sound how to tug a rope, ride a bicycle or go up and down stairs.  He did this with a happy heart.

During show and tell his other classmates stood in front of the class speaking and displaying objects.  Dennis became the things he wished to share with the other students.  His imitation of a tree at recess was so convincing and sincere he became one with nature.

Regardless of being his best self, his singularity made him feel isolated at times.  He wished the other children would understand him.  One day his actions did draw the attention of another, a girl with the name

With her opening text Salina Yoon beckons us toward imagined enchantment.  What is it about Dennis that is extraordinary?  With each sentence and her carefully chosen words our connection to, and yes our affection for, this remarkable child grows.  By revealing only one or two sentences per page, the impact of the narrative is greater.  We are able feel the surge of emotion Dennis displays with Joy at the end.  Here are two more sentences, one on each of two pages.

Some children liked to CLIMB a tree.
Dennis was happy to BE a tree.

Although working from an F & G, which makes me even more eager to hold the finished book in my hands, little extras are already noticeable.  The title text is embossed in red foil.  The stitched flower representing the miming of a blossom feels as though it has been sewn.  To the left, on the back, the heart Dennis is wearing is paired with the first sentence on the same canvas as the front of the dust jacket.  The book case is in horizontal stripes of black and a darker warm tan with the heart pinned on the front lower right-hand corner.  On the opening and closing endpapers Dennis is shown miming eight different things or activities in a double pattern.

Heavier paper in the same hue as the dust jacket provides a wonderful background for the limited color palette of black, white, red along with several pages of softer full color when we see the other children.  Rendered in

pencil on paper and colored digitally

the images are placed on a single page, span edge to edge on two pages or are grouped on two pages.  By choosing to display the miming in red stitching Salina Yoon is enhancing the creativity of Dennis.

Dennis' black and white striped shirt, large top hat, the heart pinned to his shirt and painted face are adorable identifying traits.  The decision to print some of the text in red and in capital letters adds importance to those words.  When Yoon brings us closer to the characters' faces their presence spreads in our hearts.  Careful readers will notice tiny details such as the flight of the bluebird, the placement of the pinned heart and the jump rope design at the end.

One of my many favorite illustrations is of Dennis being a tree.  He is standing on a small grassy hill. His arms are outstretched one higher than the other like a branch; one leg is raised with that foot placed on the other leg.  His merriment is showing on his face.  A tiny blue bird has flown from the real tree to perch on his fingers.

Not only are you going to read Be A Friend written and illustrated by Salina Yoon over and over again at one sitting, you are going to want to read it to others.  The combined pacing of the text and pictures is superb; a tale about needing a friend and being a friend.  If you use it in a storytime make sure to have red hearts to give to your listeners.

To learn more about Salina Yoon and her other delightful books please follow the link attached to her name to access her website.  She also gives us a peek at two interior pages in this book.  At the publisher's website there is an activity kit you can view and download.  At author Tara Lazar's website, Writing for Kids (While Raising Them), the cover for this title is revealed along with a short chat about this book.  At Scholastic's Ambassador for School Libraries John Schumacher's website, Watch. Connect. Read. Salina Yoon reveals the book trailer as well as writing her readers a letter about Be A Friend.