It was as if they were conjured and controlled by an unseen magician.  Neither a chirp nor a cheep was uttered but there was the sound, the sound of hundreds of wing beats.  It was late in the afternoon as they dove and swirled and dove and swirled as if dancing an avian ballet.  My furry friend and I paused in our walk standing as still as stone, both unable to believe this phenomenon was happening next to us. 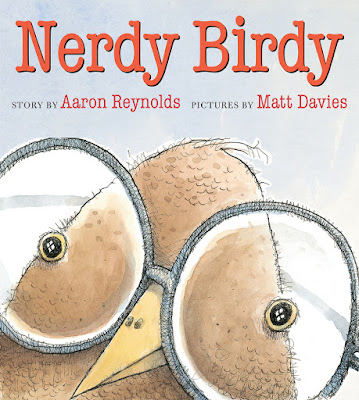 These starlings left as swiftly as they came, flying as a unit with a seemingly single conscience.  Some scientists speculate they instinctively stay together to locate food and to repel predators; there is survival in numbers.  With humans it is sometimes a different kind of survival; a fine line we walk in choosing which paths to take, wanting to belong but maintaining our individuality.  Nerdy Birdy (A Neal Porter Book, Roaring Brook Press, September 22, 2015) written by Aaron Reynolds with pictures by Matt Davies follows a bird seeking to find his place among his feathered fellows.

This is Nerdy Birdy.
His glasses are too big.
His wings are too small.

He can't eat what other birds eat.  He is not one of the cool birds.  Eagle is a muscle-bound hunter.  Cardinal is a flamboyant vocalist.  Robin is a compulsive connoisseur of worms.

Nerdy Birdy is passionate about reading, video games and reading about said games.  Every time he wants to share his excitement for a particular book or the game, The Earthworm King in World of Wormcraft, Eagle, Cardinal and Robin nix his enthusiasm.  Nerdy Birdy finds himself alone and lonely whether they are with him or not.  One day a voice calls out to him.

A new arrival alters the community social dynamics.  Nerdy Birdy is not surprised by some of the responses but others leave him perplexed.  Recognition and compassion forge a bond setting an unforeseen precedent.


One of the first things you notice about this story of friendship is the comedic pacing conceived and supplied by Aaron Reynolds.  Two words, Nerdy Birdy, hook you.  After describing the nerdiness of this bird, Reynolds launches into the attributes of Eagle, Cardinal and Robin pointing out the more obvious physical qualities but adding humorous touches for the intended audience and as well as older readers.  When the trio leaves in pursuit of their daily endeavors he again includes more funny remarks.

The dialogue between the characters throughout the narrative clearly designates their personalities leading us to the heart of the story and the surprising conclusion.  There are groups of three statements and thoughts throughout this story which are attractive to a reader's psyche.  This plus the repetition of key phrases are a sign of excellent writing.  Here is a sample passage.


If the text does not have you bursting out in laughter (you should probably check to see if you are still breathing if this is the case) the illustrations rendered in pen, ink and watercolor by Matt Davies will have you rolling on the floor.  The matching dust jacket and book case accentuate the qualities of Nerdy Birdy by zooming in on his face.  To the left, on the back, Eagle, Cardinal and Robin are acting out their pretentious, unfriendly identities. Eagle calls out nerd, Cardinal is making the well-known nerd sign with his feathered fingers around his eyes and Robin is pointing and laughing. Bird-beak yellow colors the opening and closing endpapers.

Davies enhances the text at every page turn with his gift for incorporating the smallest details.  When we learn of Nerdy Birdy's too small wings he is standing outside a toy store window featuring a T-Rex.  As he hunts for breadcrumbs he is carrying a basket.  Eagle's hunting and fishing has him attacking a rhinoceros and a shark. Nerdy Birdy is reading a book written by the same author who wrote Worm & Peace. The image on the newcomer's lunch box is hilarious.

Design, layout and perspective by Davies create a flow pairing nicely with the story.  When Eagle, Cardinal and Robin leave all we see are their feet and lower bodies as they exit the page.  Nerdy Birdy is standing alone at the bottom. White space and lightly colored backgrounds play an important part.

One of my favorite illustrations is the first one we see of Nerdy Birdy.  It sets the tone for the entire book.  How can we not want to know more about this bird with those eyes and those glasses?  We can all feel a kinship with a bird finding himself on the outside looking in.


If you have not read Nerdy Birdy written by Aaron Reynolds with pictures by Matt Davies make sure you do so as soon as possible.  If you've already read it, go now and read it again, preferably aloud.  There is nothing better than laughing and learning at the same time.

Please visit the websites of Aaron Reynolds and Matt Davies to learn more about them and their work by following the links attached to their names.  Be sure to stop over at the publisher's website to see eight interior illustrations. Aaron and Matt interview each other on Elizabeth O. Dulemba's site.  You are really going to like what you read at the end of the interview.

For some reason this video is now stuck in my head after reading this book.  It might have something to do with the birds and their words in this book.


If you want to experience visually what Xena and I saw mentioned in the introduction follow this link.  It's amazing.
Posted by Xena's Mom at 8:56 PM