To Understand The Truth

The memory is so vivid it feels as though only a few hours have passed rather than decades.  Two members of my family and I were at our first Native American Pow Wow.  It was being held in the largest arena in our state's capital.  We were in attendance with thousands of other people.  Our seats were in the balcony.

A hush fell over the crowd as the cadence commenced.  A line of men walked down the center of the people to the front of the hall.  Large drums were carried.  The sound they created was that of a universal heartbeat.  At the same time my family and I looked at each other with tears in our eyes.  It was an astonishingly powerful experience. 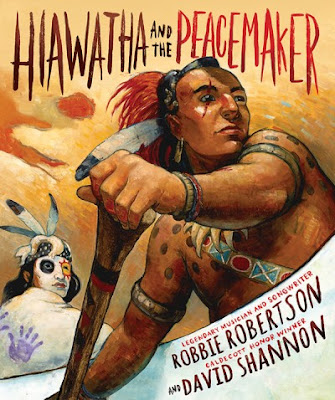 While the drumming remains strong in my mind another Native American tradition is as potent.  Storytelling is a sacred art.  In Hiawatha And The Peacemaker (Abrams Books For Young Readers, September 8, 2015) with words by Robbie Robertson and pictures by David Shannon we enter the wondrous realm of history brought to life by a tale passed from one generation to the next.

A fierce scream echoed through the woodlands...
Was it a dream?  An eerie steam crept up from the ground, and the smell of burning pine filled the air.

A man stood amid the remains of his village.  His wife and three daughters lost in a bitter battle.  He sought shelter near the river unable to do anything for weeks but think in anger of revenge against the wicked warrior responsible, Chief Tadodaho. His name was Hiawatha.

Early one misty morning, a canoe carved from white stone and rowed by a solitary figure, came toward him.  The stranger did not talk but handed him an offering.  Finally the man spoke, carefully and struggling, about the

It was a new idea of peace among the nations, a plea to end the fighting.  Hiawatha was asked to deliver this wisdom on behalf of the man for his words were strong.  Hiawatha decided to travel with

and spread the message of the Great Law.

Stepping into and paddling the stone canoe Hiawatha marveled at how it moved on the water. As the two men, Hiawatha and The Peacemaker, journeyed from the Mohawk to the Cayuga, they met with resistance and the destruction of another tribe.  This rekindled Hiawatha's deep anger.

At the Cayuga council the Peacemaker talked this time changing minds with his eyes and words.  When they left two canoes went to the Seneca.  Then three canoes paddled toward the woods of the Oneida.  There was power in unity.

After a revelation three nations, Hiawatha and The Peacemaker returned to the Mohawk but they did not join the others still fearful of retribution by Tadodaho.  The Peacemaker offered proof of the wisdom of the Great Law to the dismay of Hiawatha. The voice of an elder Clan Mother added weight to the actions of The Peacemaker.  The morning proved the insight of her words.

As the four nations confronted Tadodaho and the other men of the Onondaga people a singular song rang out coinciding with a natural event.  Forgiveness healed pain in two men.  Days passed.  The power of The Peacemaker continued to spread until a lone eagle stood guard at the top of the Tree of Peace. To this day the People of the Long House abide by the Great Law.


As soon as you start reading (or if you are fortunate to be a listener hearing this story) the words written by Robbie Robertson where you are will fall away, taking you into the world of Hiawatha through his personal narration.  Eloquent descriptions of place, the conversations and growing relationship between Hiawatha and The Peacemaker, the real and emotional journey taken by one and many and the quiet power of The Peacemaker are completely captivating.  A storyteller's rhythm is established by the initial opposition of each people, the Mohawk, the Cayuga, the Seneca, the Oneida, and the Onondaga and their approach to the two men followed by belief in the Great Law.  The refrain

binds them together as surely as does the Great Law.  The feats of The Peacemaker as related by Robertson are extraordinary.  Here are two passages from early in the book.

The Peacemaker closed his eyes and placed his hand on my back.  Somehow he had the power to move his message through me.  I began to speak his words.  "Peace, power, and righteousness shall be the new way," I said.  "We must join together.  All nations will become one family.  Our people shall have one body, one mind and one heart.  That is the message of the Great Law."

The Clan Mothers nodded in agreement, and a sense of relief spread over me.  But then the War Chief spoke.  "We respect your message, but we cannot join you," he said.  "How can we know if your words are true?  Tadodaho is too strong, too violent.  Our people must be prepared to fight."


Stunning is the first word which comes to mind in looking at the dust jacket illustrations rendered in oil by Caldecott honor award winner, David Shannon.  The portraits he presents of Hiawatha and The Peacemaker are riveting and strong.  The edge of The Peacemaker's cloak extends to the spine on the left.  The softer colors of the back image, in the same hues as the front, blend into the spine on the right.  The picture on the back is of The Peacemaker rowing toward shore when Hiawatha first sees him.  It goes to the edge of the back flap.

On the book case two different visuals from the interior portray the strength of Hiawatha's and The Peacemaker's words.  The one on the right is a close-up of the first speech by Hiawatha with The Peacemaker placing his hands on his back.  The other, to the left, is of The Peacemaker speaking to the Cayuga when Hiawatha is consumed by rage.  The opening and closing endpapers are muted steel-gray brush strokes.

On the title page Shannon sets the scenario for Hiawatha's arrival at his destroyed village.  He is shown standing on a hill, carrying a turkey from a hunting trip, looking at a plume of black smoke rising from the trees near the river.  Five double page paintings edged in white began the visual enhancement of the text expressing to the reader a range of deep emotions.  Then single page images framed in white alternate with double page pictures.

When Hiawatha and The Peacemaker are joined by another canoe, Shannon depicts this with a smaller painting at the bottom of the text.  It looks like early Native American art.  His details, the reflections in the water, the facial and body painting, the clothing and jewelry, the interior of the council house and the portrayal of the evil Tadodaho are striking.  By shifting his perspectives we are further connected to every nuance in the tale.  I wonder if the two hands on the back of The Peacemaker's cloak are indicative of his ability to convey his message to Hiawatha.

One of my favorite illustrations is of The Peacemaker's first appearance to Hiawatha.  Here is a man filled with sadness and anger at his great loss, not moving from the edge of the river for weeks, looking up to see a white stone canoe floating on the river toward him.  The stranger's face is painted white with black around one eye and a sun around the other.  The colors surrounding The Peacemaker are early morning yellows and blues with the edge of the woods in the foreground.  It's so calm The Peacemaker and his canoe are mirrored in the water.


Without hesitation I highly recommend Hiawatha And The Peacemaker written by Robbie Robertson and illustrated by David Shannon for all professional and personal bookshelves.  It conveys the strength of unifying for peace, laying down weapons of war and governing together, men and women.  It is founded in truth and marvelously told in words and pictures by two great artists.  At the close of the book a historical note, acknowledgements and author's note offer more information.  The story behind this story is absolutely perfect.  A CD of an original song written and recorded by Robbie Robertson is included with the book.

To learn more about Robbie Robertson and his other work in music please follow the link attached to his name to access his website.  The link embedded in David Shannon's name will take you to his website where you can learn more about him, his other books and illustrative work.  Robbie Robertson is interviewed and this book is discussed at CBCNEWS-Arts & Entertainment, Biography.com, and RollingStone. At the closing session of the American Library Association Annual conference in the summer 2015 Robbie Robertson and David Shannon spoke about the making of this book.  David Shannon talks about this book and one particular illustration at TeachingBooks.net.