On February 24, 2016 people around the world will be celebrating World Read Aloud Day.  One of this year's activities leading up to the festivities, focused on the sheer joy of reading, is the 7 Strengths Countdown.  These seven weeks highlighting specific themes, belonging, curiosity, friendship, kindness, confidence, courage and hope, began the week of January 3, 2016. 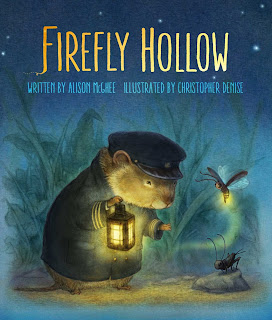 Very early this morning I finished
a book, a book with words and pictures resonating long after the final pages are turned and the cover is closed, which embodies every single one of those ideas.  Firefly Hollow (Atheneum Books for Young Readers, an imprint of Simon & Schuster Children's Publishing Division, August 18, 2015) written by Alison McGhee with illustrations by Christopher Denise is a place called home by firefly, cricket, vole and human nations.  It is an extraordinary place if you have a true heart, a heart ready to believe.

Since she was a teeny, tiny baby Firefly was watched over and encouraged by Elder.  They had a secret code for communicating, three fast and two long blinks which meant a variety of words depending on the situation.  Regardless of what she learned in her Basics of Blinking, Air Safety and Fear of Giants classes, Firefly practiced her midair flips, loop-de-loops, figure eights and timed her endurance flying.  Firefly had dreams; to explore beyond the safety of her home, to get closer to the miniature giant and to fly among the stars traveling to the moon.  The other fireflies thought she was crazy.

Cricket was usually getting in trouble during the Telling Temperature, High Jumping or Fear of Giants classes taught by Teacher.  He understood the reasons for fearing all water, the sun and giants but he had secrets.  Cricket had been close to the miniature giant, a boy called Peter, many, many times.  At night when the other crickets were singing about the natural world, Cricket hid away from the others among the reeds on the sandy shore, singing the words Peter and his friend sang,

Take me out to the ballgame...

Cricket had a dream; he wanted to be the Yogi Berra of crickets, learning to catch.  The other crickets thought he was crazy.

Vole was the last of his kind.  All the other river voles had lost their lives in a great flood (the giants had destroyed a beaver dam) when he was very young.  He now lived on a boat crafted of cedar by his grandfather tied to the roots of a white birch on the bank of the river.  He practiced a series of sailor knots over and over and memorized the River Vole's Guide.  Many seasons had come and gone and Vole had never left this spot.  He had a dream to sail, as his ancestors had done for years, down the river south to the sea.  The other animals highly respected Vole.

Both Cricket and Firefly were told giants could not see or hear them but after curious Firefly found Cricket, they made discoveries of their own.  These lead to a summer like none other ever experienced before in any of their lives. Firefly, Cricket and Peter helped and healed one another.  Vole watched, waited and cared for the two small creatures.

As the days grew shorter, the leaves started to look a little less green, and Peter's parents kept talking about school (He is refusing to go for reasons I will let you uncover.), a hurtful encounter at the hollow tree had Firefly doing the impossible.  Nations united in unforgettable moments.  Words of wisdom and comfort

You'll know when the time is right.
I'll be watching over you.
Let it come to you.

bound in hope a courageous, kind and confident cricket, firefly, vole and boy.  Their curiosity and sense of adventure created a friendship built on the need to belong.


The realm of Firefly Hollow is a place tucked away outside the hustle and bustle of city life, a small space of trees, leaves, grasses, and wild flowers near a river running to the sea.  We only know of two homes of humans near the wildlife community.  Alison McGhee fashions a world we want to reach out, hold gently in our hands and store in our hearts forever.  In our mind's eye we can see the hollowed tree, home to the firefly nation, the school training all the crickets, the outside and interior of Vole's boat and the flat rock, sandy beach and home of the boy Peter.  We share balmy nights lit by stars and a moon and days full of summer sunshine.

The conversations between the characters are genuine, full of true emotion.  We are also privy to the thoughts of Firefly, Cricket, Vole and Peter.  In addition to the dialogue between the characters McGhee has a narrator softly and subtly unfolding all the parts of the characters' lives, past and present, so we completely and wholeheartedly feel a kinship with them.  Here are some sample passages.

Firefly floated closer still.  This song was not a cricket song at all.  Firefly could hardly believe it, but this song was, in fact, a giant song.   It was the same song that the miniature giant used to sing, back in the days when his friend was still there and they played catch on the shore.

This was a song about forbidden things: giants and ball games and crowds.  Firefly fluttered her wings just enough to stay aloft, trying to be as quiet as possible, so that she wouldn't disturb the unknown cricket and his song.

Now the sun went down, and the clearing in the woods began to glow with fireflies.  Vole watched the little rebel cricket hop down the creature path and hide himself in the reeds by the riverbank.  Every time Vole heard this particular cricket's song, he crept out onto this deck to listen.  There was something about the little cricket and his song that made him dream of faraway places.  Of what he himself might see, when he finally sailed downstream and beheld the great waters beyond.

Peter tilted his head in the way that meant he was trying to figure something out.  How could Cricket explain to him?
"After we die, we turn into music," he said.  "And we're everywhere."  They turned into the sound of the wind, rustling the leaves on the trees.
The crunch of an acorn in the fall.
The tap-tap-tap of a woodpecker's beak on a tree.
All these sounds were music.  Crickets and the memory of them were still part of the world, even if they were invisible.


The illustrations in this book by Christopher Denise will literally take your breath away.  You are introduced to Vole, Firefly and Cricket during a nighttime conversation along the river bank in the initial visual on the dust jacket.   The luminosity seen here is found in the fourteen full color single page images placed within the interior of this story.

These eloquent pictures depict fireflies in flight, one doing loop-de-loops beneath a full moon, Cricket gazing at the captured baseball card of Yogi Berra, sunlight streaming through the trees into the clearing, and Peter, eyes open wide in wonder, peering at Cricket and Firefly near their flat rock.  Each image is a study in light and shadow, delicate details drawing you into the world of Firefly Hollow.  Numerous drawings in black and white and various sizes further support the narrative.  Each chapter begins with an oval picture above the text.  One particular image of a small paper boat caused me to burst into tears.

One of my favorite (I love all of them.) illustrations is the interior of Vole's boat at night.  He is sitting in his chair which rests on a small rug on the plank floor, an open book on his lap.  Firefly is floating upward toward her hammock-like bed in a spider web.  Cricket is sleepily leaning against the folded paper boat resting on Vole's table.  The room is lit from the glow of the fire.  Readers will wish they could join them.


Firefly Hallow written by Alison McGhee with illustrations by Christopher Denise is a marvelous story of longing, loss and love.  It's one you want to read at least once a year.  It's a story you will want to share with as many as you can.  Read it one-on-one or to an entire group, but read it you must.  This book is a classic in the truest sense.

To learn more about Alison McGhee and Christopher Denise please visit their websites by following the links attached to their names.  They both have more information about this book on their respective blogs (Christopher's) which are linked at their websites.  At the publisher's website are several more interior images as well as an excerpt from this book.  Take a moment to read Q & A with Alison McGhee at Publishers Weekly about this title.  Alison McGhee also talks about her writing process for this book at The Pippin Insider.  Christopher Denise and Nick Patton chat together on The Picturebooking Podcast.