One had just turned twenty and the other was still nineteen when the bombing of Pearl Harbor took place on December 7, 1941.  The man would enter the army spending a portion of his service for an entire year on two of the inhabitable islands in the Aleutian chain.  The woman would remain home continuing to work in a secretarial position, joining the USO and selling enough war bonds to earn special recognition from the United States Treasury Department.  Their oral and written recollections, photographs and memorabilia informed me in a very personal way as to the effects this war had for those at home and those serving in the armed forces. 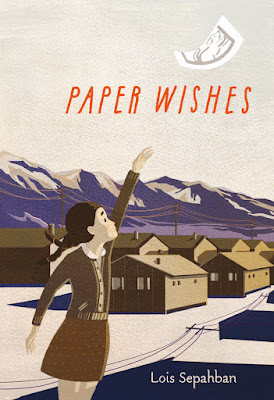 Carefully researched nonfiction, Barbed Wire Baseball, and historical fiction, Echo,  Dash and Duke, are a few examples of children's literature which built on the understanding given to me by my parents.  There are many stories making up the collective whole of an event as large as a world war in human history.  Paper Wishes (Margaret Ferguson Books, Farrar Straus Giroux, January 5, 2016) written by Lois Sepahban speaks to life of Japanese Americans held at the internment camp, Manzanar, located in California.

Manami and her grandfather are spending time at the beach on and near their special rock on Bainbridge Island in Washington.  The family dog, most dear to Grandfather and Manami, Yujiin runs along the beach toward the duo.  At school that day as the rest of the students leave, the Japanese American children are asked by their teacher to stay.  She tells them this is their last day of school.  Manami is frightened and filled with questions.

She and her family along with all the other families of Japanese descent on Bainbridge Island have to leave relinquishing their home, their belongings and their entire way of life.  The family endures medical checkups and is assigned a number and given tags to put on the one suitcase allowed per person.  Manami's older brother, Ron, and older sister, Keiko, are attending Earlham College in Indiana.  Plans have been made for the local pastor to care for Yujiin in their absence.

On the day they leave Manami cannot bear to part with Yujiin.  She tucks him inside her coat to keep him close.  The dog is not detected on the ferry ride to the mainland.  As they are boarding the bus taking them to trains and then the camp, a solider stops Manami.  Yujiin is discovered, taken from her and left in a crate by a deeply saddened grandfather.

Days, weeks and months pass in silence.  Ten-year-old Manami does not speak; deep grief and guilt fill her throat like the dust which is everywhere.   Life with her family and the other thousands of internees swirls around her as the community grows.  Always she watches and looks for Yujiin.  Always she hopes for a return to normal.

After several months the arrival of her brother Ron causes subtle tension and shifts in old and new relationships.  His position as a teacher at the school and his intentions are the subject of scrutiny and misinterpretation. Big changes are coming to the Tanaka and Ishii family members.  What will Manami do this time?

Within the first few pages Lois Sepahban builds a connection between the reader and the characters.  We sense the coming differences in normal life with the mention of the war, the presence of the military and the children being told they can't attend school any more.  By revealing the circumstances of Yujiin becoming a member of the family, we are keenly aware of the dog's importance.

Using Manami's voice to tell this story brings poignancy to the events.  We come to know each character through their responses to her and to each other.  Dialogue, her thoughts and actions capture a complete picture of their lives at this camp.  By relating simple but everyday moments we feel as though we are there with them.

Dividing the chapters into the months spent at the camp helps us to understand the smaller portrait of this one family within the larger picture of Manzanar.  The matter-of-fact, realistic sentences overwhelm you with sadness except for the undercurrent of resilience like the carefully tended plants in Manami's mother's garden.  The introduction of Miss Rosalie as Manami's teacher adds more layers to the story.  When she gives Manami paper and pencils daily, in which to express herself, the child's talent and desires are shown to us.  It is particularly heartbreaking to watch her release a paper into the wind thirty-one times with special pictures and words, paper wishes.  Here are a couple of sample passages.

I soon discover that if I crouch down low with my eyes next to the ground, I can pretend that the dirt looks like sand here.
If I stand tall with my feet bare, I can pretend the dirt feels like sand here.
But when I open my mouth to speak, the dirt no longer feels like sand.  It sticks to my lips and tongue like red mud.  It coats my throat so that I cannot speak.
I think this is what has happened to me
I wish the dirt would cloud my eyes too, so that I would not see this place that is and is not my home without Yujiin.

And then the rain comes.
Mother pulls us outside.  She holds my hands, spinning us around and around.  Others join in our rain dance.  The yard in front of the mess hall is a muddy swirl of people.
The rain does not drip or drop.  The rain pours.  Like the water pump.  Like the showers.
It pours until the laughing faces and twirling feet stop their happy dance.
It pours until Mother begins to frown.
"Hurry, children!" she says.  "We must save my plants."
We run to Mother's garden.  The water pours so fast that there is already a pond forming in the yard.
Mother touches her battered plants one by one.
The pouring rain has pounded them into the ground.  Fragile stems are broken.  Tiny leaves float free.
Mother kneels and pulls me to her, wrapping her arms around my waist.  She cries into my stomach.

Paper Wishes written by Lois Sepahban brings vividly to life the past.  The weight of sadness for the people who spent years in those camps is profoundly felt.  It is an important book asking us to remember.  It is a book about many kinds of love.  This title has my highest recommendation.  An author's note at the end offers further explanations. (This post is based upon the reading of an advance reader's edition.)

To learn more about Lois Sepahban and her other books please follow the link attached to her name to access her website.  You can read an excerpt at the publisher's website.  Lois Sepahban is interviewed at Literary Rambles and the swanky seventeens.  You can find her on Twitter at @LoisSepahban

Update:  Lois Sepahban is interviewed at The Horn Book Spring 2016 Publisher's Preview Five Questions for Lois Sepahban
Posted by Xena's Mom at 1:15 AM