As a visitor or new resident to the western part of Montana, you find yourself saying, "What is that!?"  Perhaps a flash of iridescent black mixed with blue and green catches your eye or a noise akin to a prehistoric insect pierces the otherwise quiet.  During every season of the year you will see the black-billed magpie gliding through the air and landing among your trees.  Adult males range in size from eighteen to twenty-four inches long; half the length is their tail. 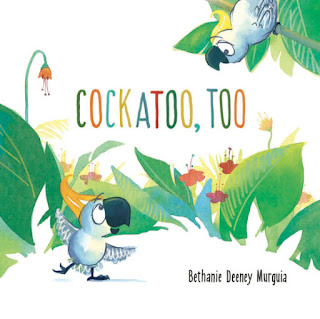 As clever as other family members, their singular bird call sounds like a coded message waiting to be translated.  Lately it's very easy to imagine them giving their avian friends notice of Cockatoo, Too (little bee books, an imprint of Bonnier Publishing Group, January 5, 2016) written and illustrated by Bethanie Deeney Murguia.  Humans should be on the lookout for telltale signs in the snow of a feathered-friend hoedown inspired by this new title.

A solitary cockatoo awakens as the sun rises, hip-hopping in happiness.  To its surprise another bird flutters down, momentarily pausing his wiggling and jiggling.  Who knew there was another cockatoo?  A reached resolution is immediately interrupted.

There's a new fuss coming from the foliage.  One, two, three and four more enter.  Feet raised, forming a line, this new crew kicks and cavorts with abandon.  It would be great if the group becomes eight.

Wait a minute!  There are nine, ten, eleven and many more.  It's a tweeting, twittering uproar.


As soon as you read the title, that phrase rolls out the red carpet for rollicking word play.  For the majority of the narrative Bethanie Deeney Murguia uses combinations of six plus one words skillfully applying rhyming and alliteration.  As the pages are turned the laughter is guaranteed to increase as the sentences and questions get a wee bit longer and a bit more mixed.


It's impossible to look at the matching dust jacket and book case without grinning.  Those chunky, wide-eyed cockatoos within the colorful jungle fauna are ready for action.  On the back, to the left, a third cockatoo with an orange crest and matching tutu is resting, exhausted, against a bowed flower.  The text

Whew, it's a jungle out there.

is a clear "why" inquiry.  You can easily tell from the jacket and case how Bethanie Deeney Murguia uses white space as an important element in her images.

On the opening endpapers in blue and green, cockatoos and toucans are peacefully sleeping among large jungle leaves.  On the closing endpapers the pattern is the same but the colors and facial features reflect a delightful difference.  The initial title page begins the story with a single cockatoo resting in a tree top, a crescent moon outlined in the pale blue sky as dawn breaks.  A larger picture spans across the formal title pages with the cockatoo awake and striding through the jungle.

watercolor, gouache, ink, crayon, and a bit of block printing, all combined in Photoshop (Thank you Bethanie for answering my question.)

the illustrations all cover two pages with the hues of the leaves and trees an indication of the time of day.  As new characters enter the story, readers will note body positions and facial expressions which announce their arrival.  Other members of the dance company are cleverly concealed until the precise moment of their appearance.

One of my favorite illustrations is at the beginning when the lone cockatoo, on the right, notices the feet and bottom part of the body of another bird, on the left, drifting through the ferns and flowers.  The expression on its face is one of caution and curiosity.  The previous joy is frozen.  There's quite a bit of anticipation in this image.


There are fun books.  There are funny books.  Fun and funny books are the best.  Cockatoo, Too written and illustrated by Bethanie Deeney Murguia is the later.  You are going to want to read it aloud as often as you get requests to do so.  It's a word play wonder!

To discover more about Bethanie Deeney Murguia please follow the links attached to her name to access her website and blog.  At the little bee books website you will find a coloring page and a How to Draw a Cockatoo page.  Simon & Schuster has seven illustrations for you to view.  Bethanie Deeney Murguia is interviewed at BookPage and Ronnie's Awesome List.  Bethanie Deeney Murguia was a guest at Scholastic's Ambassador for School Libraries John Schumacher's blog Watch. Connect. Read. speaking about this title and premiering the book trailer below.