With the American Library Association Youth Media Awards less than a week away, my mind has been not only on all the possible winners for 2016 but on the past medal and honor winners.  I've been doing a mental inventory of all those stellar titles along with the books which, in my way of thinking, came close to being recognized.  It's an exciting time of year when the spotlight shines on children's literature as a whole.  The value of all authors and illustrators and their impact on the reading lives of children is at an all-time high during this wondrous week. 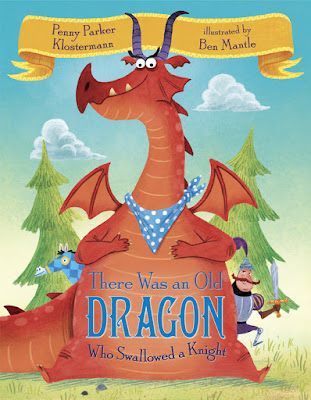 In 1997 The New York Times selected ten titles for their Best Illustrated Books choices.  In 1998 the Caldecott committee chose three Honor books.  There Was an Old Lady Who Swallowed a Fly by Simms Taback was the only book to be on both lists.  This past year debut picture book author Penny Parker Klostermann gave readers a variant on that classic rhyme.  There Was an Old Dragon Who Swallowed a Knight (Random House, August 4, 2015) illustrated by Ben Mantle is the jolly journey of a fire-breathing fiend hoping to appease a huge hunger.

There was an old dragon
who swallowed a knight.
I don't know why he swallowed the knight.
It's not polite!

The knight came riding on a horse.  Disturbed by the energetic equine the dragon devoured him too.  In search of further food, the dragon blazed the bottom of an innocent squire.  The smell must have signaled to his stomach because this is where the squire landed.

A cook and a book he held dear were the next to go quickly followed by a fair maiden snatched from a high tower.  Royalty must have proper housing so the castle was hastily consumed.  To quench his undoubtedly ever-growing thirst, this dragon drank and drank and drank until he drained the moat.

By this time, the old dragon was having second thoughts about his gluttonous gobbling.  With skill he produced a gigantic superb burp.  Out came one, two, three, four, and five portions of his enticing feast.  To avoid listening to the

of the annoying horse, the beast dug deep and belched out the knight's peppy pal.

This, my friends, left the knight still not in sight.  The wily dragon relieved of his ballooning belly made a fateful final decision.


Rhyming words take us on an exuberant escapade.  More importantly Penny Parker Klostermann extends the story with additional descriptive elements, making each member on the menu more interesting to us.  Her purpose for the dragon swallowing the first unfortunate six are a mix of reason and the ridiculous.  Here is a sample passage.

There was an old dragon
who swallowed a cook---
A savory cook and his recipe book.
He swallowed the cook to fatten the squire. ...


The image on the matching dust jacket and book case extends from flap edge to flap edge.  The bib around the dragon's neck coupled with the look on his face makes us fairly certain the knight might be in a wee bit of trouble.  To the left, on the back, is an arrow sign with the word

pointing to the grinning large orange guy.  On the rock is a

list.  Knight, at the top, is already crossed off with steed, squire, cook, lady, castle and moat following.   On the ground is a shield with a bite out of it, a knight's helmet and a bone.  A green frog sits on top of a

The opening and closing endpapers, the first in shades of green and the second in hues of rose tell a tale of their own.  It's a map of the kingdom with a path winding through the landmarks.  There are notable changes in the two beside the color.  The four pages dedicated to the title, the verso and dedication begin the story.  All is not as merry as it seems.  Danger is in the offing.  The wanted poster is a clear hint.

Ben Mantle using full color, shadows and light, brings us back to the old world.  His details add levity to the narrative.  In the first scene, spanning two pages, bones, helmets, bitten and scorched signs, a lance, and an outline are evidence of the dragon's intentions toward the oblivious knight and his trusty, hoofed companion.  After the knight is eaten a large dark circle gives us a look inside the dragon's stomach as the horse peeks safely from around a rock elevating the comedy.

Alternating between double pages for his pictures, single pages and a group of smaller images, Mantle asks us to pause.  The black background illustrations, inside the stomach, are hilarious.  Each person and thing lands differently with flourish and fun on the previous occupants.  The details on the facial expressions, the consumed beings' antics on the inside and the shape of the capital letter T are full of medieval mirth.

One of my favorite illustrations is after the dragon has swallowed the moat.  On the inside of his stomach all the current residents are filled with fear.  The horse, squire and cook with his book are holding on to the top of the castle tower.  The lady is inside the tower.  A frog is speaking to her.  Is he asking for a kiss?  Floating in the water is the cook's kettle.  The knight, looking as wide-eyed as the others, sits inside it as alligators swim hungrily around waiting for a bite.

You must include There Was an Old Dragon Who Swallowed a Knight written by Penny Parker Klostermann with illustrations by Ben Mantle in your personal and private collections.  It asks to be read aloud often with enthusiasm.  I can hear the laughter already it will elicit.