The Glory Of Story

Stories are everywhere.  According to Merriam-Webster story is defined as a history, an accounting, a statement of facts, an amusing anecdote, a fictional narrative such as a short story, the plot of a longer work and a well-accepted rumor.  It would seem the particular meaning assigned to story would depend on the teller.

Nothing is more enlightening than working with a group of students during a storytelling exercise with each person telling one and the others guessing whether it is the truth or a lie. For the most part the tales shared are genuine and without fabrication.  We are wired to tell stories, our stories. 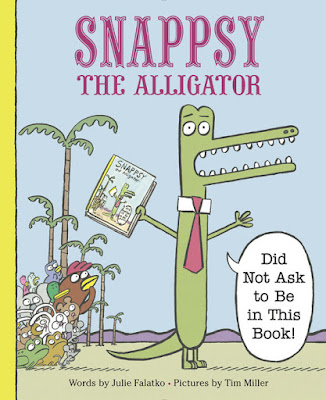 We share those stories when it feels comfortable to do so.  Snappsy The Alligator (Did Not Ask to Be in This Book!)(Viking, Penguin Young Readers Group, an imprint of Penguin Random House L. L. C., February 2, 2016) with words by debut author Julie Falatko and pictures by debut illustrator Tim Miller elaborates on a day in the life of an annoyed alligator.  Truth, lies and humor abound.

Snappsy the alligator wasn't feeling
like himself.
His feet felt draggy.
His skin felt baggy.
His tail wouldn't swish this way and that.
And, worst of all, his big jaw wouldn't SNAP.

Actually Snappsy is not having feet, tail or jaw problems.  He is simply hungry and in pursuit of food.  This intrusive unseen yarn spinner is prone to exaggeration.

When this is pointed out by none other than the protagonist, the teller takes another approach.  They drone on without expression stating what readers can easily see in the illustrations.  An increasingly frustrated reptile responds to these duller-than-dull statements which in turn elevates the false adjectives attached to the story line.

Snappsy finally arrives at the grocery store only to have more untruths spouted by the vexing voice.  Retracing his route Snappsy returns home, placing a no-nonsense sign on his door,

before he closes it with considerable force.  This is indeed frustrating.  What could Snappsy possibly be doing inside?  The speculations offered are not flattering.

At his wit's end and feeling provoked the green guy proposes and proceeds with plans for a party.  As the festivities reach a high note, someone is peeking in the door.  One surprise after another will leave you as bamboozled as Snappsy.  You'll be giggling with glee too!


The comedic pacing in this story is priceless.  As written by Julie Falatko Snappsy is an unassuming, average alligator who wants nothing more than to enjoy a good meal and a good book.  On the other hand, the narrator seesaws between exaggeration, blandness and unwanted advice and comments while deftly evading reality and manipulating Snappsy and readers toward a desired conclusion.  The alligator's answers in dialogue clearly depict his growing agitation and eventual desire to be the best kind of character.  Here is another sample passage.

Snappsy looked hungrily at the other shoppers...
...while loading his cart with pudding, peanut butter, pita bread, and popcorn.


The dust jacket is the first funny indication of the story within a story we find in this title.  Snappsy holding a copy of the book as a group of character critters watch is already feeling peeved.  As you can see the gator is a sharp dresser (which has nothing to do with the quality of his teeth) sporting the stiff white collar and pink tie.  To the left, on the back, three stellar authors share their praise of the book.  Responses by Snappsy and the narrator will have you laughing.

The opening and closing endpapers on a white background show Snappsy engaged in ten different activities such as brushing his teeth, reading while wearing his fez, doing the hula and enjoying bath time with his rubber ducky.  They are identical except for two on the far right at the end.  The narrator is revealed.

brush and ink and computer hocus-pocus

Tim Miller brings considerable playfulness to the story in his images.  Snappsy's physical features begin the merriment with his thin body, long nose and wide eyes.  To match the cadence of the narrative Miller alternates between full pages framed in white, single pages with a closer perspective when Snappsy is speaking, and several illustrations on one page.  At one point two pages convey Snappsy's current state of mind in no uncertain terms.  Although his holding of a feather duster does defuse the emotion behind his statements.

Readers will relish all the tiny details included in the pictures. In the opening image two bugs are sitting behind a rock reading a book, later Snappsy searches for food using a telescope, a girl in the grocery store parking lot is reading a copy of this book, the items in the grocery store are shelved alphabetically and a duck is puzzling over the yellow ducky floating in Snappsy's kiddie pool outside his house.  What is the tiny mouse doing as he rests in Snappsy's little red wagon?  Is it the same one with a balloon problem at the party?

One of my favorite illustrations is Snappsy, hands on his hips, standing in the jungle on his way to the grocery store.  He is admittedly disgusted with the narrator's choice of words.  A flock of frightened birds are flying in panic.  A herd of bunnies are frantically fleeing.  Tiny creatures are peering from among the foliage.


Snappsy The Alligator (Did Not Ask to Be in This Book!) written by Julie Falatko with illustrations by Tim Miller is loaded with non-stop laughter.  The discrepancies between the unseen voice and the alligator's dialogue propel the plot toward a conclusion which only the clever narrator could foresee.  Don't be surprised if your readers begin wearing a pink tie, a fez, or party hats.  They might also start to crave chocolate pudding.

To learn more about Julie Falatko and Tim Miller please follow the links attached to their names to access their websites.  These will take you to their blogs also.  On Julie Falatko's blog there is a link to a series of five fun activities which you can use.  Tim Miller has several posts on his blog filled with his artistic process for this title plus a recent picture of him reading amid the huge east coast snowfall.  On Scholastic's Ambassador for School Libraries John Schumacher's blog Watch. Connect. Read. Julie Falatko visits as a guest for the cover reveal.  Tim Miller is interviewed at Miss Marple's Musings and at Seven Impossible Things Before Breakfast.  If you want to get a peek at the opening endpapers stop by the publisher's website. Both Falatko and Miller can be found on Twitter at @JulieFalatko and @TM_Illustration


Snappsy Did Not Ask to Be in This Video About How to Draw Him from Tim Miller on Vimeo.

Julie Falatko and Tim Miller are featured on the podcast, Let's Get Busy, Episode #233

This interview at The Little Crooked Cottage is hilarious.

UPDATE:  February 16, 2016  This title is the focus of a round table discussion at Seven Impossible Things Before Breakfast.