Every morning, noon and night, despite your plans, is an adventure.  When you wake up you believe you have full knowledge of how your day is going to unfold.  You check your calendar, the news and the weather report.  You have gathered all the necessary tools to accomplish your day's tasks.

Of course if your calendar is still on March instead of April, an appointment might be missed.  A banner flashing an emergency message on your television screen about unexpected electrical repairs by city workers could foil your attempts at cooking meals.  Opening your front door to see additional snow instead of the predicted partly cloudy day will definitely put a damper on leaf raking. 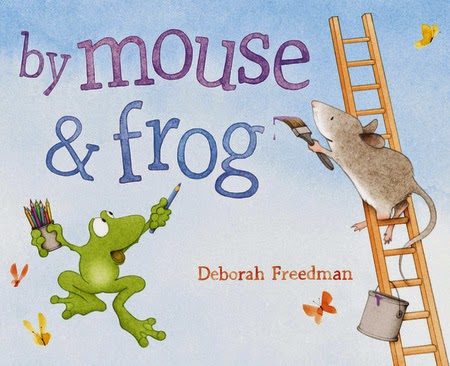 One morning,
Mouse woke up especially early,
eager to write a brand-new story.

With the time-honored words of

Once upon a time

Mouse begins with a quiet scene of a table being set for tea using a pencil to draw the items, a table, a chair, a cup and saucer, a spoon, a tea pot and a single flower in a vase.  Into this serene setting bursts Frog.  He's sure the table is being readied for his presence.  In fact, pencil now in his hand, he proceeds to add cake, a big cake, to the offered refreshments.

Without a word to Mouse, Frog decides to include a King as a guest.  As Frog would have it, this particular royal has a hankering for ice cream,

Still mopping up the spilled tea, Mouse is aghast at the mess this melting treat will make.  Oblivious to his friend's distress, Frog has the King declare an open invitation to all in the kingdom for cake and ice cream.  Weaving words and waving his pencil Frog's version of this tale fills the page.

In a fit of frustration, Mouse puts a stop to this story.  When Mouse airs his views, Frog counters.  Clearly their ideas do not match. In a flurry of explanations to characters, erasures and painting, a blank canvas awaits a fresh opening.

A deflated Frog listens as Mouse speaks and draws.  Sensing his revisions are still not what his friend desires, Mouse proposes a change.  Leaping to the challenge, grinning with gusto, and grabbing another pencil, Frog joins Mouse.  Two minds are ready to call in the magic.


As in her previous title, The Story of Fish & Snail, Deborah Freedman introduces readers to wonderfully likable personalities.  We can readily identify with the calm and routine-is-right Mouse as well as the spontaneous and exuberant Frog.  Their differences of opinion as presented in dialogue and their individual versions of the story supply gentle tension and much laughter.  We come to understand how wide Frog's reading world is with his insertion of bits and pieces from other books and tales.  Here is a sample passage.


I simply can't help it.  I start smiling as soon as I see the dust jacket of this book.  (I'm working with an F & G.) There is something completely endearing in the creatures Deborah Freedman brings into our world.  You can already tell Frog is the more energetic of the two.  Mouse is intently finishing the painting of mouse.  A container filled with a rainbow of color clasped in Frog's hand signals his willingness to explore and add variety.  The butterflies have always meant to me something new is on the way.  To the left, on the back, in a continuation of the blue and white as several butterflies hover near the pencil-drawn table which holds the ISBN.

On the front and back flaps Freedman has Mouse and Frog speaking and interacting with the text on both.  On the opening endpaper Mouse is on the ladder painting white over a soft beige on the page with a can near the bottom of the ladder.  Tucked in the lower right-hand corner is the container of colored pencils.  Everything is white on the closing endpapers except for a single butterfly on the left and a can of paint, brush and pencil along with the ladder, bucket and mop on the right.  There are no words leaving interpretation to the reader.

For the title pages Mouse is on the ladder continuing to paint everything white; the paint can and container of pencils close at hand.  Rendered in pencil, pastel, watercolor and gouache then assembled in Photoshop, the illustrations span across single and double pages.  The way Freedman uses white space with the other mediums is marvelous.

She begins slowly with black and white; the only color in Mouse and the container of pencils.  With Frog's entrance a splash of green is introduced along with the spilled tea.  It is never stated in the text that the tea pot falls from the table.  Her illustrations extend and enhance with excellence.  When Mouse first sighs, the spilled tea is being mopped.  As Frog embellishes his story, more hues appear.  The dragon's fire is a purple haze and the background for the next page.

Freedman's features on the drawn character's and Frog's and Mouse's faces are brimming with emotion, welcoming us into both stories.  The animated antics of both Frog and Mouse, how they use their hands and feet, are delightful.  As she did on the dust jacket flaps, the closing page and publication information page feature Frog and Mouse in conversation.  Trust me, you are going to laugh.

One of my many favorite illustrations is the second set of two pages.  The look on Frog's face as he announces his wishes joyfully jumping on the page is a clear contrast to the look of shock on Mouse's face.  Mouse's stance, feet spread wide, tail straight up and mouth wide open, is hilarious.  This image sets the tone for the differences between the two friends.


Every single thing about By Mouse & Frog, the text and pictures, is masterfully done by Deborah Freedman.  This story is about how stories and the art of compromise develop.  Please read it aloud with voices as often as you can.  I can hardly wait to add it to my 2016 Mock Caldecott list.

To learn more about Deborah Freedman please visit her website by following the link attached to her name.  An earlier interview at Seven Impossible Things Before Breakfast hosted by author and blogger Julie Danielson can be found here.  Deborah Freedman wrote/drew a guest post at author Tara Lazar's PiBoIdMo, Deborah Freedman Begins Drawing. Update:  An Educator's Guide to the Works of Deborah Freedman is now available.