Yesterday morning before the sun rose, a crescent moon hung in a deep blue sky over black lace treetops.  The air was filled with birdsong.  In fact, the birds seemed to be participants in some celebratory party as many were wildly flying from point to point.  As I moved toward the end of my driveway two flew past me at breakneck speed.  They were so close I felt the rush of air as they passed. 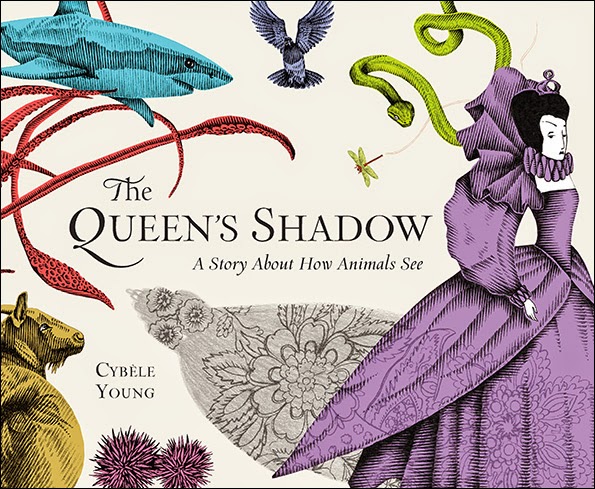 I wondered how they could see so well in the dim light of dawn.  I wondered how they missed colliding with me.  The Queen's Shadow:  A Story About How Animals See (Kids Can Press, March 1, 2015) written and illustrated by Toronto-based author illustrator Cybele Young artfully explores the vision of many animals through a mysterious theft.

The Queen's Ball had begun like any other of her royal parties---lavish displays of food and festive entertainment were being enjoyed by society's most important nobility.

Catching her guests unaware an unexpected booming burst of noise and flash of lightning flooded the room with blinding brightness before seconds later all went as black as night.  Then as if someone had flipped a switch, all was light again.  Mere heartbeats later a scream was heard.  It was the Queen.

Her shadow was missing; stolen in the stormy confusion.  As you can imagine everyone, especially the Queen, was in a tizzy.  Into the foray stepped calm, cool and methodical Mantis Shrimp, the Royal Detective.  No one was to leave the room.

Of the nine partygoers Sir Chameleon was obviously the thief according to quick deductions.  Explaining how his eyes work, independently of one another when searching for food, it was impossible for him to have consumed the shadow.  He pointed a finger at Captain Shark.

As each animal was accused by a companion, their particular sense of vision provided an alibi.  Whether by distinguishing patterns in gloomy conditions, sensing body heat in light or dark, knowing when enemies approach due to peripheral sight, using compound eyes or extremely large eyes, seeing into great distances and sensing a huge array of color or using an entire body to look, the sea urchins, pigeon, colossal squid, dragonfly, goat, lancehead pit viper snake, shark, chameleon and particularly the mantis shrimp were all innocent. Where was the Queen's shadow?

Two giggling animal children who loved a good game of hide-and-seek provided the answer.  In stunned silence, the Royal Guards and the Royal Detective did their duties.  Thus ended the party and the mystery.  But...all was still not quite right.  Or was it?


By the second paragraph the entire mood of the story changes as Cybele Young captivates her readers with an intriguing mystery.  This quick shift from elegant party to burglary is an excellent hook.  To have animals with given nobility names adds a pinch of humor but also opens the door to the discussion of their vision.

Through a pleasing blend of narrative and dialogue the plot unfolds much like the best kind of detective story.  The Queen's exclamations as each member of the company are proclaimed the perpetrator will have readers grinning. The inclusion of a side panel with a more detailed explanation of each animal's eyesight in support of their claims is the crowning perfect touch.  Here is a sample passage.

"SNEAKY, SLIPPERY SERPENT!" cried the Queen.  Stupefied, Lancehead declared:  "I was behind the Queen.  I thought it a sssafe place to hide from Goat'sss trampling feet!  (Some proper dance lessonsss would do him well.)  Goat was coming from Her Majesssty's ssside, and I saw him drawing nearer in the blackout.  He was looking straight at Her Majesssty."


Intriguing is the word which comes to mind when looking at the matching dust jacket and book case of this title.  All nine of the animals are shown in a colorful array spreading out from the back of the Queen on the front.  Their particular shades pop when placed on the white canvas.  Sir Chameleon is perched on top of the barcode on the back.

On the opening and closing endpapers the (royal) purple of the Queen's gown supplies the background.  Etched in white on one side is the elegant design seen in her dress.   This design (her shadow?) appears again on the initial title page.  For the more formal title pages Sir Chameleon is sitting on a swinging chandelier lit with candles with faint outlines of the shadow.  Those same graceful images are seen on the verso and dedication pages framed within a squid tentacle.  A tipped cake, falling from a plate, makes an appearance too.

Throughout this story the pictures may be framed with fine lines on single or double pages, spread out as if we are seeing what the animal speaking is seeing or as small accents to a particular portion of the narrative.  The layout and design is splendid.  It's like a combination of a naturalist's notebook and a fairy tale mystery.

The details are intricate, skillfully rendered.  One of my favorite illustrations is of the dragonfly's explanation.  The circles of dotted greens for the vision span intermingled with the tentacles of Colossal Squid's movements are wonderful.  An indignant Queen, hands on hips listens as does the Royal Detective.  The sight circles bleed across the gutter perfectly.


Readers will develop an appreciation for the marvel of animal sight through the fascinating mystery of The Queen's Shadow:  A Story About How Animals See written and illustrated by Cybele Young.  Whether read by an individual, shared with a group at story time or as a one-on-one read aloud, this book is exquisite in word, art and information.  At the end, Young offers a two page clarification on vision, two pages with further facts on each of the animals and a single page glossary.


Please stop by Kid Lit Frenzy hosted by educator Alyson Beecher to see the other titles highlighted by bloggers participating in the 2015 Nonfiction Picture Book Challenge. 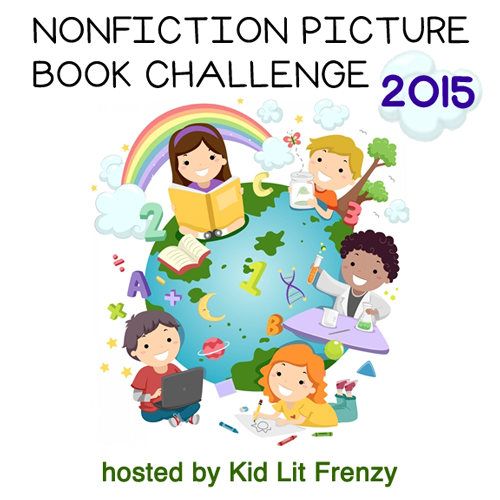