Much Depends On The Word Go

There have been many times when walking through a field, along a sandy shore or down a forest path or traveling across the waters of a stream, river, lake or ocean, I've thought of all the people and animals from the past that've done the same.  It's not uncommon for me to think, if only this tree or that rock could talk.  While it's important to live in the present, it's also critical to value the past as a guide for our future. 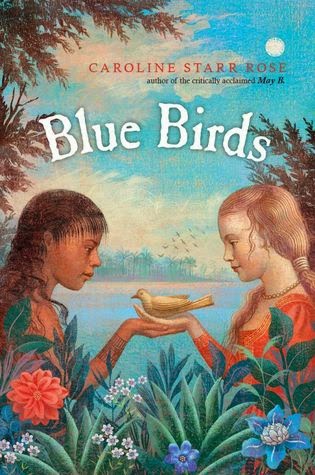 In order to be better we need to build on what we know to be true.  There are, however, mysteries from history yet to be solved.  One of them is the Lost Colony of Roanoke Island.  In Caroline Starr Rose's newest novel in verse (Her first was May B. A Novel, Schwartz & Wade Books, January 10, 2012), Blue Birds (G. P. Putnam's Sons, an imprint of Penguin Group (USA), March 19, 2015) through the voices of a Native American girl of thirteen, Kimi, and twelve year old Alis, a girl with the group of English settlers, we are shown possibilities.

But now we're anchored on sandy banks
in a place we're not to be.

The enormity of our circumstance
comes crashing down around us.
Though this is Virginia,
it's not our new home.

We will be forced ashore
miles from where
our pilot, Ferdinando,
promised to take us.

Yet our Governor
does nothing to stop him.


Not only have the one hundred seventeen men, women and children landed in the wrong spot, but they discover the remains of a burned building, the bones of a human man and the fifteen soldiers left at this settlement have vanished.  Unease wraps around the newcomers.  Watching from the forest, Kimi notices the women and children accompanying the men this time.  She wonders about the show of affection between Alis and her mother.  Looking toward the forest, Alis sees the shadow of movement.

The leader of the Roanoke, Wanchese, who traveled to England with Manteo after the first settlers arrived but later returned to his people, listens to Kimi's news.  Manteo, of the Croatoan, has remained with the English and is with this fourth group.  The two Native American men have a difference of opinion about the arrival of these settlers but are still able to converse with respect.  Wanchese and his people remember the beheading of Kimi's father, Wingina, their previous weroance and the disease the English brought killing many members of their people, including Kimi's sister.

Curiosity overcomes the admonishments of adults and Alis ventures into the nearby woods, picking flowers for her mother.  She is startled when Kimi appears at her side. In her haste to leave she drops a wooden bird carved by her beloved Uncle Samuel, one of the missing soldiers.  It is a likeness of the blue birds seen in the forest.

Kimi believes the carving carries Alis's spiritual power.  It represents the beginning and continuing connection between the two.  It also symbolizes the love they both have for the beauty of the land.

The two girls keep meeting, without anyone knowing except for Manteo and an English boy, even though their alternating chapters reveal tensions are mounting.  When a settler, George Howe is killed on the beach while crabbing by the Roanoke, the English try to ease the severely strained relationships using the Croatoans as intermediaries for peace.  As the ten day period expires without a response from the Roanoke, the English decide to attack their village.  At great risk Alis goes to the woods but Kimi is not there.


Two weeks ago I completed reading this title for the first time.  I finished it again today.  Even knowing the outcome, the verses penned by Caroline Starr Rose resonate in their intention to recreate the events of those three months and the return of Governor White three years later.  Rose gives us knowledge of background events which define the girls' initial thoughts about each other.   With careful pacing as the bond tightens between Kimi and Alis, the distrust between the Roanoke and the English grows larger.  This moves the story into page-turner mode.  The reader's need to know is great.

In dialogue spoken by key figures on both sides, woven into the girls' poems, we come to understand the circumstances and how decisions were made.  We feel the courage it took for Alis and Kimi to continue their relationship.  We feel the compassion they have for each other.  We feel the joy they had in finding similarities and in embracing differences.  In the course of several chapters, Rose has both girls speaking, creating a larger emotional impact.    Here are a couple of additional passages.


Alis
I stay
long enough to study
the patterns on her arms,
close enough
to meet her eyes
with no urge to lower my gaze.

We are not together,
but neither are we apart.

Something
fascinating, fragile
grows between us.

Kimi
I kneel by the stream.
Water flows over my hands,
loosening my tired fingers,
washing away
a day's labor
in the fields.

From behind me
there's a sound,
but I
see nothing.

Mother and her sisters
stand together,
laughing as they cup the water,
letting it run down their arms.
I watch them
crowded about Nuna,
the first baby born to us
since the English illness
killed so many.

Do English women
gather together
after work is done?

Do they form ties
with one another
that cut as deep as rivers?

If their women are like ours,
are we so different after all?

Again I hear it,
a voice
repeating
one frantic word.

Could it be Alis?
To come this close,
to risk discovery.
What would bring her so near?

Mother and sisters are occupied,
absorbed in one another.
I slip away.


In Blue Birds a novel in verse written by Caroline Starr Rose the facts of English arrivals on Roanoke, specifically the fourth in July 1587, are threaded through the fabric of this story.  It puts forth ideas for discussion and consideration which I believe good historical fiction does for its readers.  In her extensive (six plus pages) author's note Caroline Starr Rose states in the first paragraph

Why do I write historical fiction?  For the same reason I used to teach history.  I'm nosey, plain and simple.  While this is not an especially polite thing to admit about myself, it's what makes historical fiction a beautiful fit for me.  Research lets me dig into other people's experiences and live in their world.  It's a perfectly respectable way to satisfy my curiosity.

To learn more about Caroline Starr Rose and her other work please take the time to visit her website by following the link attached to her name.  This link to the publisher's website allows you to read an excerpt from the book.
Posted by Xena's Mom at 6:10 PM