All the children freeze in place.  It floats through the neighborhood like fog, soft and sure, until the final note fades away.  Glances are silently exchanged before everyone takes off running.  It's dinnertime and the call to come home has sounded. 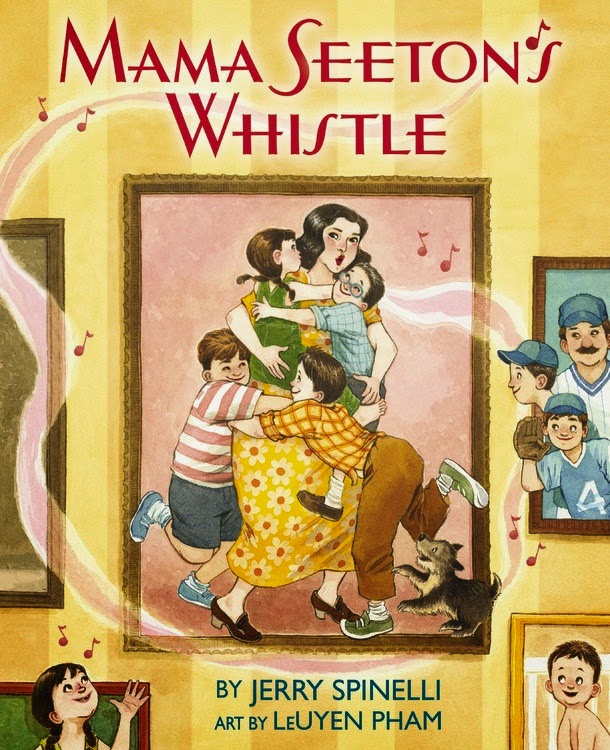 It may be the resonating ring of a bell or the familiar tinging of a triangle.  Each parent's signal is unique.  In Mama Seeton's Whistle (Little, Brown and Company, April 14, 2015) written by Jerry Spinelli with illustrations by LeUyen Pham four siblings race toward a promise.

The first whistle happened one day when Skippy Seeton was two years old.

Mama Seeton was surprised when Skippy was nowhere in sight.  She had been watching him play in the backyard.  After several unanswered calls, worry made its way to her lips.  She gave a whistle.  Like a bee to honey, that boy came to his mother.  He had been hiding nearby.

When brothers Sheldon and Stewart and sister Sophie were born and finally able to move on their own, Mama Seeton's whistle worked its magic on them too.  It did not matter where they were in the neighborhood, when they heard it, they headed for home.  They knew it was time for dinner and a piece of their mother's chocolate cake.  Every single day it was the same.

As the brothers and sisters grew up they wandered farther from home to the ends of the neighborhood to play but never too far to miss hearing the whistle.  When they got even older they could be seen in town doing those things they loved best; climbing a favorite tree, visiting Papa Seeton at the cab company, watching the monkeys at the zoo or simply running for the sheer joy of it.  The clear notes of their mother's song never failed to bring them home.

When Skippy, Sheldon, Stewart and Sophie became adults and left home to continue doing what they loved best, Mama Seeton no longer whistled.  Her children were too far away to hear.  Her cake baking was less frequent.

One day Papa Seeton had an idea.  Mama Seeton thought he was a little loony.  Two light, smooth tones traveled.  Promises were kept.  A legacy was born.


In the masterful hands of author Jerry Spinelli a childhood memory becomes a story for generations to enjoy.  It's as if we are gathered around a campfire listening intently.  His pairing of words, like the names of the children, creates a cadence.  His description of the whistle repeated several times binds us to the tale.  His easy similar sentences flow through time taking us with them.  Here is a sample passage.

As the Seeton kids got older, they played farther and farther from their own backyard.
They played in the alley.
They played to the end of the block.
They played all the way to Stony Creek.
Then across the creek and into the park. ...


A warm and welcoming palette on the matching dust jacket and book case rendered, as are all the illustrations, in ink and watercolor by LeUyen Pham creates a feeling of family and home.  There is a cheerful, lilting quality about framing the Seeton parents and children in meaningful moments on both the front and the back.  The tiny notes of the whistle wrap around Mama Seeton and her children like love.  On the opening and closing endpapers a soft white background features each of the children coming home on their bike, scooter, skateboard or at a fast walk with the whistle like a ribbon overhead.  On the initial title page a chocolate cake sits beneath the text.  On the formal title page Pham pictures Mama Seeton in a chair holding a newborn Skippy with the dog, a pup, in the basket next to her.  Her whistle frames the words.

As a charming, lovely complement to the story Pham alternates her image sizes from two pages, to single pages and then to smaller visuals with the text and whistle weaving around them.  She generates a feeling of constant connection.  As time passes we see its evidence in the clothing, vehicles and hair styles.  Readers will want to pause at each picture noticing the tiny details.  At one point Sophie mails home one of her medals to Mama Seeton.  In a later illustration we see it hanging on the wall of the Seeton home.

One of my favorite pictures is the two-page span for the partial passage noted above.  We are given a bird's eye view of the neighborhood.  The Seeton home is framed in rosy red rays at the top left as the notes travel to the children.  Pham shows us the change of seasons as we follow the whistle to the far right, beginning with spring or summer, moving to autumn and then to winter.


Heartwarming from beginning to end, Mama Seeton's Whistle written by Jerry Spinelli with illustrations by LeUyen Pham is a trip through time worth taking again and again.  It demonstrates the value of family, the promises held in our homes and significance of tradition.  You will have a hard time not beginning your reading with the words, Once upon a time.  In the author's note at the end Jerry Spinelli speaks about the real Mama Seeton who was his childhood neighbor.  LeUyen talks about her artistic process in her illustrator's note.

To discover more about Jerry Spinelli and LeUyen Pham please visit their websites by following the links attached to their names.
Posted by Xena's Mom at 5:03 PM