To discover characters you've come to enjoy will be returning in another story is like celebrating your birthday more than one day a year.  They are friends you can take with you anywhere, experiencing their adventures, their joys, their tears and their fears.  Over time, books in a series allow you to watch characters grow. 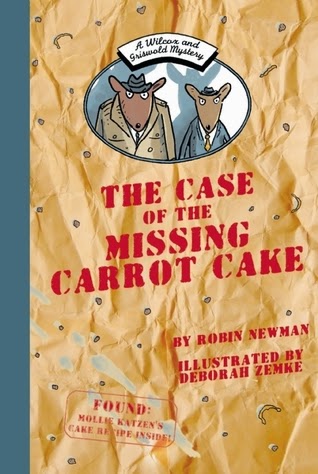 While reading about these fictional pals we can see little pieces of ourselves in them.  Sometimes we notice something before they do, willing them to share in this realization.  One of the best things is when they make us laugh, completely unaware.  Yesterday teacher librarian extraordinaire, John Schumacher hosted author Robin Newman on his blog, Watch. Connect. Read.  After reading the post I knew I had to move her debut title, The Case Of The Missing Carrot Cake (A Wilcox and Griswold Mystery), Creston Books, LLC, May 12, 2015) to the top of my stack.  Late into the night I was bursting into laughter at her words and the funny detailed illustrations of Deborah Zemke.

Boys and girls, this case is about thieves on Ed's farm.  The names have been changed to protect the good guys.
Over 100 animals live on this farm.  Most work.  Some horse around.  Others steal.

The phone at the MFI (Missing Food Investigators) office rings at ten on Monday morning.  It would seem that a carrot cake, baked by Miss Rabbit in anticipation of an upcoming party, has vanished.  Detective Wilcox and Captain Griswold, two vigilant policemice, head to the scene of the crime in their squad car.

After sliding down the rabbit hole, they see crumbs, carrots and frosting all over the kitchen, even on the pajama-clad Miss Rabbit.  Clearly she is in a state of extreme agitation.  The sleuths are stumped as there is no evidence pointing to a culprit.

Three possible suspects are questioned with due diligence, Fowler the Owl, who would enjoy consuming a particular rabbit and two nearby mice more than an evil-smelling carrot cake, Porcini the Pig, a corn-loving thief with a list of priors, and Hot Dog, a dog with gourmet cooking skills and an appetite to match.  Their replies only add to the who-done-it mystery.  A cake consumer is on the loose.

Detective Wilcox devises a plan to ensnare the wily rogue, employing a cook's culinary confection and a tried-and-true technology.  Nearly twenty-four hours of waiting end when a shout of sheer chagrin pierces the air.  Another heist has happened.

Can this carrot cake case be cracked? Will the gumshoes get the sticky-pawed prowler?  Read and savor the delectable conclusion.


Be prepared to grin and grin again from the first page to the very last courtesy of clever word play written by Robin Newman.  Readers are treated to case-solving lingo, puns and well-known phrases expertly inserted into the narrative and dialogue.  Detective Wilcox carries the conversations while Captain Griswold's stares and glares make their own statements.  Each episode ends with a definitive thought by Wilcox,

A hard nut indeed. or
Slower than molasses indeed.

for example.  To heighten the thrill of the chase, times and places begin the chapters and portions within chapters.  Here is another sample passage.

Porcini's cheeks turned the color of a red hot chili pepper.
"I may take the cake as the best corn thief in town, but sirs, I am not a common cake thief!
Oink!"
The captain handed me Porcini's rap sheet. (That's a record of arrests for all you non-cops.)
It was a mile long for corn robberies, but he had no cake priors.
"Seems like you've spent some time in the pen," I said, hoping his reaction would give me a clue.
"Why peck at the past?  I did my time and now I'm clean.  I bet Hot Dog ate the cake.
That slobbering hound has a sweet tooth."


The crumpled paper spattered with cake crumbs covers both the front and back of the book case.  On a file folder with a tab reading CAKE, CARROT book blurbs are featured on the opened left.  One look at the determined faces of Detective Wilcox and Captain Griswold framed in the oval on the right and you know the crooks will be captured.  The opening and closing endpapers continue the theme with the Case Report containing the publication information opposite the title page at the beginning.  The dedications are paper-clipped to the top.  At the end an evidence folder appears on the left with wanted descriptions of the author and illustrator on the right.

The illustrations rendered by Deborah Zemke using a full-color palette are a blend of spot insertions, oval headers for chapters, full page pictures framed in a white border, smaller images on a single page and a two page illustration surrounding the text.  These variations in size enhance the pacing to perfection.  She skillfully maintains perspective with the animal sizes on the farm. Facial features and body language add to the comedy.

Zemeke's details are as playful as the text.  The squad car is a wind-up toy.  When taking pictures at the crime scene, Captain Griswold uses an old-style flash camera.  At one point Fowler The Owl is wearing a gas mask.

One of my favorite illustrations is of the squad car traveling down the road at the start of the story.  We are given a bird's eye view of the farm complete with two chickens crossing the road in a crosswalk with an appropriate sign at the side.  I dare you not to laugh when you see the wind-up key sticking out the side of the policemouse car.


This early reader, The Case Of The Missing Carrot Cake (A Wilcox and Griswold Mystery) written by Robin Newman with illustrations by Deborah Zemke, is one you don't want to miss.  Whether you read it to yourself or as a read aloud plan on a chorus of "read it again" and shared smiles.  It's one case you won't want to close.  I would stock multiple copies.  An every-last-crumb-will-be-consumed Mollie Katzen's Carrot Cake recipe is included at the end.  A second book is coming in the fall of 2016. Hooray!

To learn more about Robin Newman and Deborah Zemke please follow the links attached to their names taking you to their websites.  Here is a link to Robin Newman's blog. A Curriculum Guide for Educators & Readers is located here.  Enjoy the book trailer.

The Case of the Missing Carrot Cake from Robin Newman on Vimeo.
Posted by Xena's Mom at 5:01 PM