Every single time I read a biography, especially a picture book biography; I am truly astounded at the capacity of the human spirit.  My purpose in placing emphasis on picture book biographies is those authors and illustrators search for the essence of each person, specific points of interest, given their limited page space.  No matter the circumstances of these individuals, they all have a can-do attitude.  Their lives serve to inspire others. 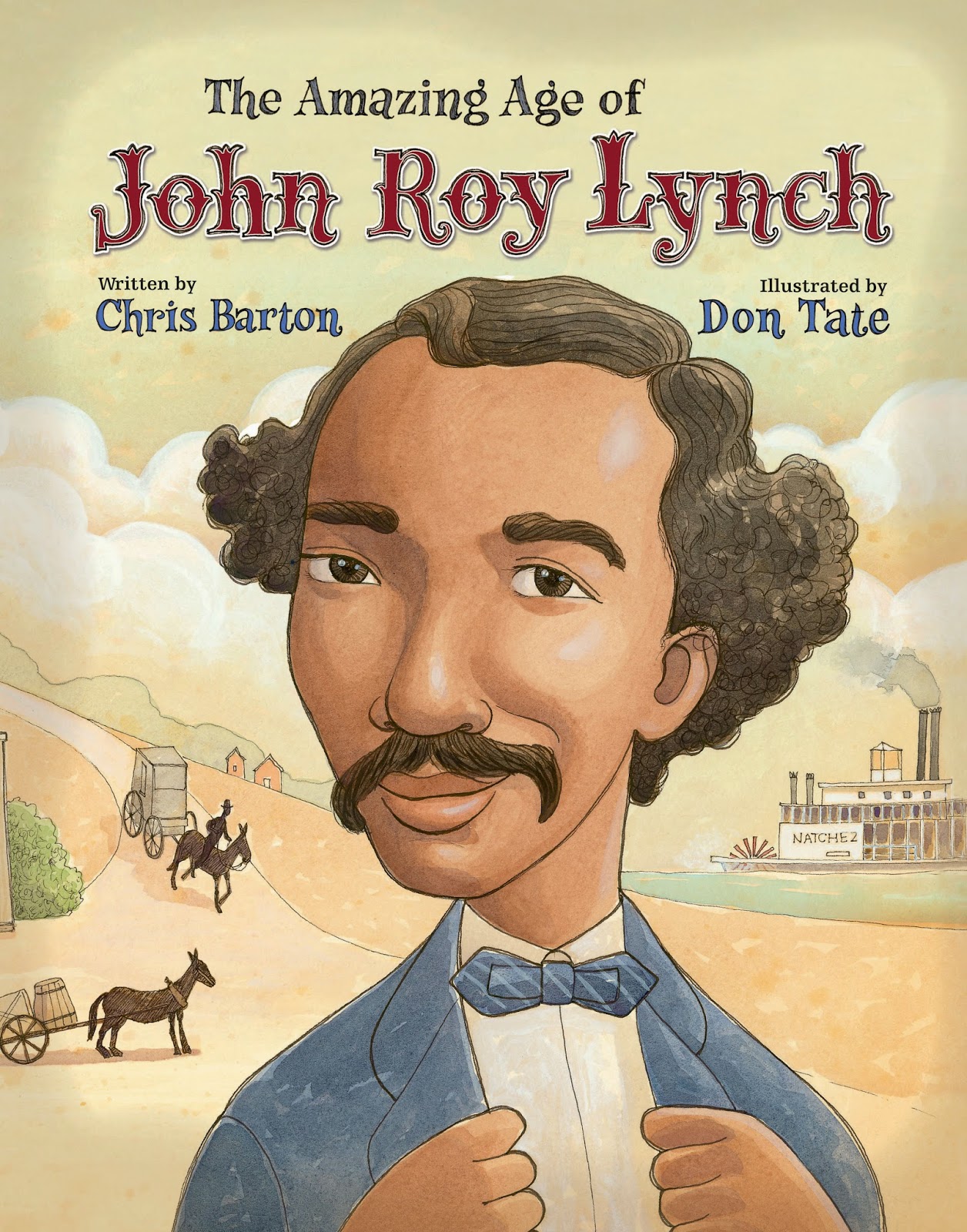 In reading The Amazing Age of John Roy Lynch (Eerdmans Books for Young Readers, April 1, 2015) written by Chris Barton with illustrations by Don Tate with every page turn I could feel myself cheering on this man.  In any given situation, he found a way to move forward.  He searched for opportunities, making them work for his life's goal.  There is a reason the word amazing appears in the title.

John Roy Lynch had an Irish father and an enslaved mother.  By the law of the South before the Civil War, that made John Roy and his brother half Irish and all slave.

It is believed that John's father, an overseer, wished to buy John, his brother and mother, Catherine.  Before he was able to complete his plan, Patrick died.  The man who he entrusted to carry out his desires sold the family to new owners.

John Roy was allowed to work at the big house on Homochitto Street of his new owners, Mr. and Mrs. Davis, in the city of Natchez across the Mississippi River.  His service there came to an end when he voiced his true opinion during a meal one day.  John Roy was moved to work in the cotton fields on the other side of the river at Tacony Plantation.

After the Emancipation Proclamation but still during the Civil War, John Roy turned sixteen.  With true ingenuity, he was able to cross the river back to Natchez.  He secured a job on a Union transport steamer.  During his employment with them he bettered his position three times.  At the close of the war, John Roy decided to stay in Natchez instead of heading to the North.  It was a tumultuous and dangerous time in Mississippi for the freed slaves.

As he had done aboard the Altamont, John Roy at the age of nineteen became indispensable in his new employment at a local portrait shop.  Sincere in his efforts to keep learning he would listen in on lessons given at a nearby school and attended night classes.  When changes came to Mississippi, John Roy was ready.

John Roy began to speak out as a political activist.  He became a land owner. (I cheered when I read where he purchased property.)  For his efforts and voice for righteousness, a newly appointed governor in 1868, gave John Roy the position in Natchez of Justice of the Peace.  He was twenty-one years old.  John Roy refused to keep silent and the people of Mississippi believed in him election after election.  By the time he was twenty-five John Roy Lynch was on his way to Washington, D. C. to serve in the United States House of Representatives.  These achievements are indeed amazing.


What is most impressive about the writing of Chris Barton in this title is his ability to captivate the reader immediately with his frank discussion of the events in which John Roy was born, raised and lived.  A key aspect which contributes to the excellence of this biography is the inclusion of vivid portrayals of life in the South during Reconstruction.  Sentences such as

His father lacked the power to change the law---he was just an overseer, a hired hand.
Besides, while he many have loved these slaves, he most likely took the whip to others.

serve to build confidence and trust between the author and the reader.

Word choices and selected information, meticulously researched, reveal how in each adverse situation, truly horrific at times, John Roy persevered building toward his success.  The way Barton writes, as a reader, you can feel tension (the good kind) building toward the final two pages which include his speech on the floor of the United States House of Representatives in favor of the Civil Rights Bill.  Here is another sample passage.

Trusted to develop the photographs, John Roy continued to develop himself.  He took note of everything, every detail of operating the shop.  Because the shop owner had John Roy Lynch, he didn't need anyone else.  By nineteen, John Roy was running the place by himself.


When you open the matching dust jacket and book case, the community of Natchez is displayed from the back to the front, left to right.  John Roy Lynch, as a successful politician for the people, is looking right at the reader.  Due to his early success I like to think he would make eye contact with everyone he met, sincere to his center in his endeavors.  The opening and closing endpapers are textured in hues mirroring old paper or parchment.  Across the verso and title pages a single picture continues what is viewed on the dust jacket and book case.  The Natchez is floating down the Mississippi River with clouds billowing in the background.

Using mixed media, ink and gouache on watercolor paper, Don Tate recreates historical Mississippi for readers.  Gorgeous two page spreads with intricate detail depict momentous occasions in John Roy Lynch's life and in the lives of others; our introduction to his family, his father as overseer of the slaves working in the cotton fields, his father's death, Mrs. Davis's singing and speaking during Sunday School, John Roy crossing back to Natchez and then leaving the Altamont, the horror of the new Mississippi laws and life during Reconstruction, the portrait shop, John Ray Lynch speaking to people and to the representatives of the House.  The text may be placed within the image or set aside in a frame. Smaller pictures or single page illustrations are either surrounded by white space or extend page edge to page edge. Tate's color choices are a reflection of the historical period, the setting, architecture and clothing.

One of my favorite illustrations is of John Roy Lynch standing on a hill in Natchez after he decides to stay.  In the distance the Altamont, on the left, is leaving.  John Roy, the boat, knoll and bushes are in black and gray silhouette against an orange and golden yellow sky and river.   Behind John Roy, satchel in hand, is the sun. I believe this image is significant.  It speaks to the devotion of this man to his home and people.


The Amazing Age of John Roy Lynch written by Chris Barton with illustrations by Don Tate is a remarkable biography.  This is a man with whom we should all be familiar.  The blend of narrative and pictures is compelling from beginning to end.  After the two pages of his speech a single page shows an older John Roy Lynch with a continuation of his beliefs about this country.  There is a single page Historical Note about Reconstruction, a Timeline of important dates in John Roy Lynch's life alongside historical dates, an Author's Note, an Illustrator's Note, sources For Further Reading and two maps.  This is a back matter goldmine.

To learn more about Chris Barton and Don Tate please follow the links attached to their names taking you to their websites.  Here is a link to an educator's guide found at the publisher's website.  The cover reveal for this book appeared at teacher librarian extraordinaire John Schumacher's Watch. Connect. Read.  Eerdlings, Official Blog of Eerdmans Books for Young Readers, hosted both Chris Barton and Don Tate in a Q & A.  Don Tate was a guest at author and blogger Julie Danielson's Seven Impossible Things Before Breakfast. Chris Barton was a guest at busy teacher librarian Matthew C. Winner's Let's Get Busy Podcast #122.  The publisher gives you a sneak peek at interior illustrations here.  The author and illustrator have created a Pinterest board for this title.  Enjoy the book trailer.


Here is a tweet Don Tate shared about this book.


UPDATE:  March 7, 2016 both Don Tate and Chris Barton made videos regarding their Bluestem Award nominations.