Holding Hope In Your HeART

From the time you are born, every day is one less day of life.  None of us truly know the number of those days.  For some the unkindness, the cruelty, and the feeling of being invisible are like a death knell.  For some, fighting a terminal illness, the bell rings louder. 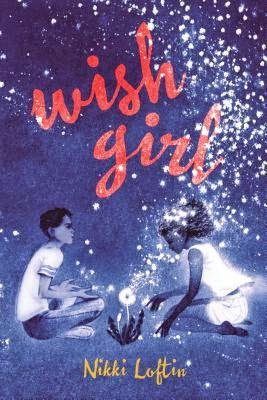 When all the doors are closed by those people closest to us, the natural realm can provide a sanctuary, a place receptive to our deepest desires.  Unlike the humans in our lives, in this place, the plants and animals listen to us.  It's like we share a heartbeat in common.  In Nikki Loftin's newest title, Wish Girl (Razorbill, an imprint of Penguin Group (USA), February 24, 2015), two people, who need such a place, find one.

The summer before I turned thirteen, I held so still it almost killed me.

This is our introduction to Peter Stone.  He and his family have recently moved from San Antonio to Texas Hill Country living in the old Carlson place. The reasons for the new location are revealed within the story.  At this moment Peter is standing on a cliff overlooking a beautiful valley he has newly discovered.  A diamondback rattler is coiled around his ankles.  Peter is an introvert.  His gift is stillness.

That evening through conversations and arguments around the dinner table we meet his parents and two sisters, one fifteen years old and the other a toddler.  His mother, constantly distracted by the demands of working, motherhood and social media received a promotion at the bank where she is employed at the same time his father lost his job.  Hoping to resurrect his career as a drummer in a band, his dad is constantly practicing and leaving home during the day looking for gigs.

Everyone and everything they do in his family is loud.  Peter's quietness earns him labels of weird and wimp.  He is made to feel as though the state of affairs in which they find themselves is his fault.

The next day at the valley Peter meets Annie Blythe, a guest for two weeks at a near-by art camp.  She tells him she's a wish girl but in truth she is a girl wanting to change the course of her life.  She is about to begin a series of radiation and chemotherapy treatments for her cancer, the late effects possibly destroying what makes her who she is.  She, like Peter, is trapped by people who won't really listen to her.  Her gift is seeing beauty everywhere, even in people, even in Peter.  Her gift is making art from this beauty.

There are several other characters who figure prominently in the relationship growing between Peter and Annie.  One is the Colonel's wife, Mrs. Empson, a widow who owns the valley and surrounding property.  Her outspoken wisdom and no-nonsense ability to set things right, not to mention her skill in maneuvering her monster go-cart like a race car driver, earns respect from those who know her.

True evil appears in the personalities of brothers, Jake and Doug.  Their desire to prey on those weaker than them or those who can't escape their guns creates knot-in-your-stomach tension.  At the other end of the spectrum is the valley.  Readers, along with Peter and Annie, come to appreciate it as a living breathing force for good to those with pure hearts.  It is a place listening to wishes.

As the end of the two weeks comes to a close, one incident after another fall like dominoes toward a heartbreaking happening.  No character is left untouched.  No reader will forget.


With her first sentence Nikki Loftin pulls readers into her narrative and does not let go until the final word whispered by the wind.  We are completely captivated by Peter's and Annie's lives; watching page by page as their friendship is woven into something tight, true and eternal.  Our compassion for both expands as we, through thoughts and dialog, come to understand them as real people, people we already know or will know.  Annie through her acceptance of Peter gives him the first real happiness he has ever known.  Peter through his support of Annie gives her hope.

Loftin's descriptions of particular events bring you into the moments with exquisite clarity.  You are walking along with the characters, experiencing every emotional nuance with them.  You will long to visit this valley.  Here are some sample passages.

Just far enough away that I couldn't hear crying or yelling or drumming.
It had seemed like a dream.  For the first time in years, I hadn't heard cars or trains, TVs or video games or people.  Hadn't seen a roofline or even a plane in the sky.
I'd been alone for the first time in my whole life, almost.  I liked it.
No, I loved it.  Out there, my heartbeat was as loud as anything in the world.

"Art isn't pretty," Annie said, whirling around.  "It's transformative!  Real art changes you---whether you like it or not.  Real art isn't"---she looked down at the yarn thing in her hand---"it's not just wrapping yarn around sticks, or coloring in the lines.  Real art makes a difference.  It has meaning.  I'll show you tomorrow."

Like it was important to be true down here.  To each other and to ourselves.  Even if we couldn't be true anywhere else.
Especially because of that.


In looking at the dust jacket and each of the chapter beginnings with a dandelion and seeds floating in the air you know this is definitely a book about wishes.  Even more important, after reading this book, are the color choices, a red garnished in fluff, for Wish Girl, and Nikki Loftin's name and the book case in a rich golden yellow.  Both speak to specific aspects of the story.  I finished Wish Girl written by Nikki Loftin for the second time very early this morning with tears in my eyes.  This is a title destined to touch your heart, leaving a forever memory.  I highly recommend it.  I believe it would make an excellent read aloud.

To discover more about Nikki Loftin and her other work please follow the link attached to her name to access her website.  She wrote a guest post, Magical Places, about this title at the Nerdy Book Club.  Nikki Loftin is interviewed at The Hiding Spot hosted by Sara Grochowski.
Posted by Xena's Mom at 1:53 PM