If We Only Knew

They look at you with complete understanding as if they have a command of whatever language you are speaking.  Outside they may suddenly pause as if all their instincts have gone on red alert.  If you should happen to leave them alone for longer than intended, it's uncanny how things seem to have been moved in your absence. 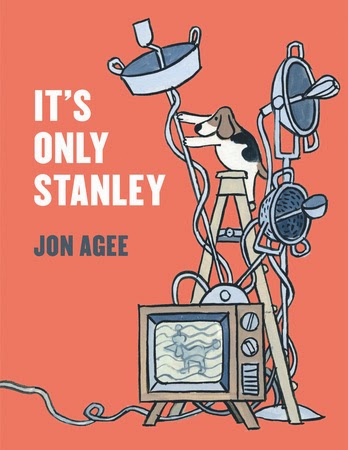 Keeping these things in mind it should come as no surprise when an author/illustrator introduces you to a canine with unique creative abilities.  What sets It's Only Stanley (Dial Books for Young Readers, an imprint of Penguin Group (USA) LLC, March 17, 2015) written and illustrated by Jon Agee apart is the humans in this dog's world.  They have no idea as to Stanley's true capabilities.

The Wimbledons were sleeping.
It was very, very late,
When Wilma heard a spooky sound,
Which made her sit up straight.
"That's very odd," said Walter.
"I don't recognize the tune..."

Upon checking Walter discovers the family beagle howling at the full moon.  Time passes.  It gets later.  Daughter Wendy wanders into her parent's bedroom complaining of another strange noise.  Investigating, dad discovers Stanley busy fixing the leaky oil tank in the basement.

After reporting this news to his wife and daughter, no one seems the least bit surprised at Stanley's handyman talents.  (At this point I can feel laughter starting to erupt.)  Before you know it, another child, Willie awakens, complaining about a weird smell.  It is now 2:30 in the morning.  Dad locates Stanley making catfish stew.

As the number of people occupying the parent's bed increases Wanda and an hour later Wylie each hears a buzzing and a splashing.  Stanley continues to make much needed repairs.  By now though, Wilma, Wendy, Willie, Wanda and Wylie are getting a tad bit cranky.  They crave sleep.  Stanley has to stop.

No one, not one single soul including Max the cat, in the Wimbledon clan has a clue as to what has happened.  Of all the curious sounds and smells this night, easily explained, this has them baffled.  Dad is going to get to the bottom of this immediately.  With the now familiar words, he announces

With the first two sentences the rhythm of Jon Agee's rhyming will be asking you to join the narrative.  With each subsequent page you find yourself wondering who is going to hear or smell what next.  In addition to the cadence Agee supplies with his words choices; the repetition of key phrases provides a beat of its own, further engaging readers in the story.  As another humorous alliterative touch all the human names, first and last, begin with w.

You are not quite certain from looking at the matching dust jacket and book case as to what Stanley is doing.  On the left, the back, the cat, Max, is watching with disgusted interest with more cobbled contraptions appearing in the background.    One thing is certain, though, Stanley is no ordinary dog.  This beagle is all business.  He is on a mission. And our curiosity is off the charts.

The bright yellow seen on the back of the jacket and case is carried to the opening and closing endpapers as a solid color signaling the electrifying effects of this story.  Prior to the verso and title pages, Stanley is pictured asleep on the front porch as a

breaks the silence.  The story continues beneath the text of the title with Stanley now awake looking at the full moon.

Heavy loose black lines define the elements in each illustration done in a muted color palette of greens, blues, yellow, red, brown, black and white. It isn't until the final pages another color is introduced.  With the simple lines on the characters' faces we are clearly aware of their moods.

Agee alters his illustration sizes, two pages, edge to edge, single pages, edge to edge and smaller pictures set in white space, depending on the point in the story.  The only text on some pages is sound effects and subtle clues.  As if the story is not funny enough, you must watch the cat in every sequence.  He is certainly a victim of Stanley's endeavors.

One of my favorite illustrations is of Walter standing in his pajamas outside in the tall grass looking at Stanley howling at the moon.  Max is with him.  It spans across two pages.  Little do we know the significance of this scene or what is in store for the Wimbledons.

I have literally been laughing off and on all afternoon and this evening after reading this book repeatedly.  It's Only Stanley written and illustrated by Jon Agee is utterly hilarious.  I can already hear the giggling of the guys and gals (and the adults) when this story is read aloud.  The comedic pacing is perfection. 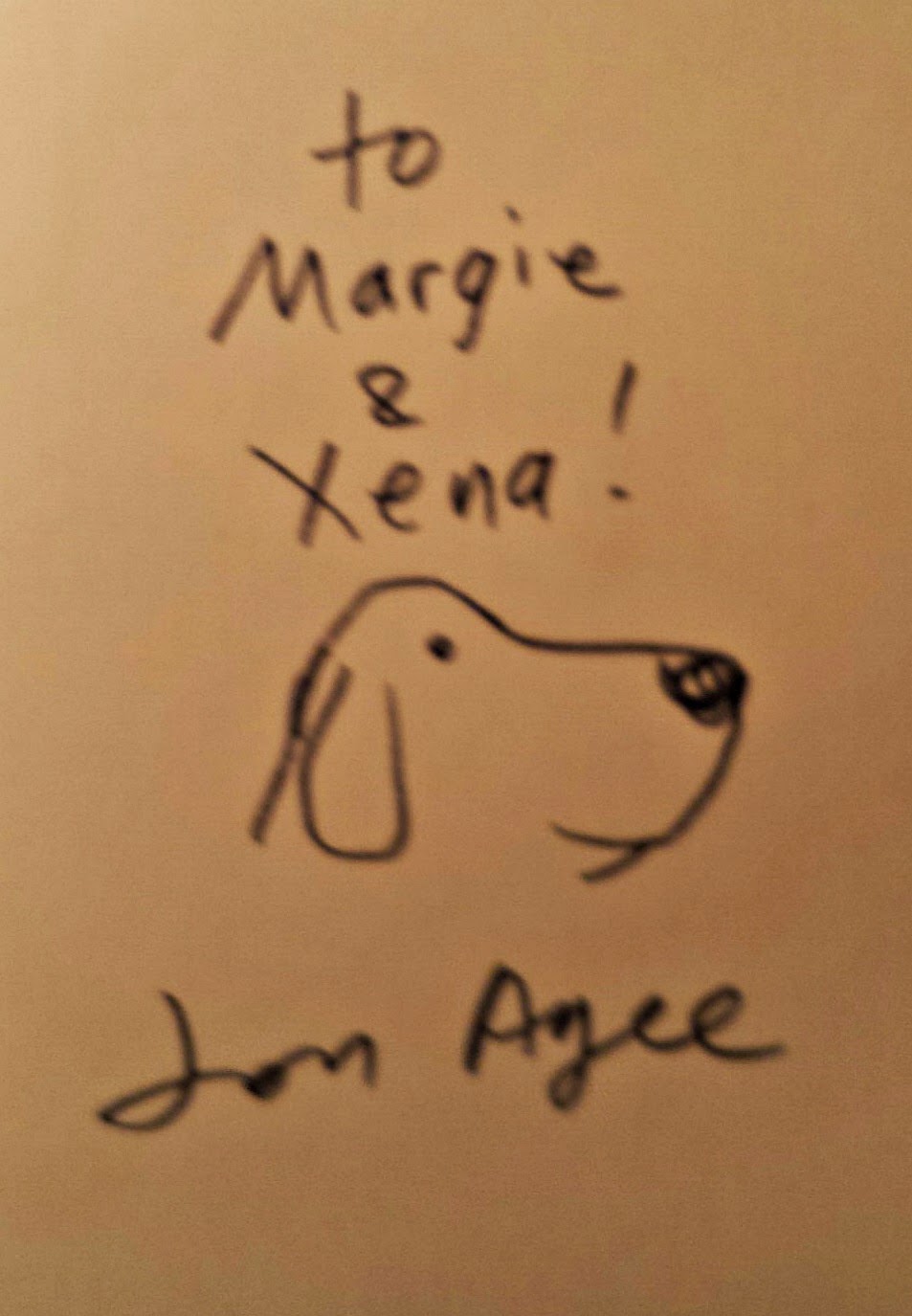 To learn more about Jon Agee and his other work please visit his website by following the link attached to his name.  Author and blogger Julie Danielson talks about this title at Kirkus and at Seven Impossible Things Before Breakfast.  Due to the generosity of teacher librarian extraordinaire, John Schumacher who hosts Watch. Connect. Read. Xena wants to give someone their own copy of this canine treat.  Xena and I thank you, John.
UPDATE:  John Schumacher tweeted about a video interview between Jon Agee and Becky Anderson, owner of Anderson's Book Shops in Illinois.  It's a must watch.