There are children longing for parents.  There are parents wishing for children.  When a match is made, it's serendipity. 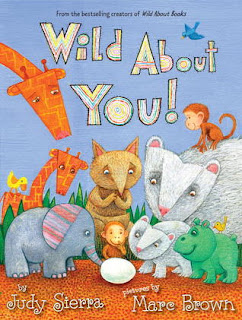 Springfield Zoo has been the setting for two upbeat and inviting stories, Wild About Books (Knopf, 2004) and ZooZical (Knopf, 2011), both written by Judy Sierra and illustrated by Marc Brown.  Their third book, Wild About You! (Alfred A. Knopf, August 2012) is a continuation of what readers have come to expect as the cheerful blend of pulsing poetry and animated illustrations.  Those now familiar faces have become excited about books, reading, writing and libraries, expanding their musical abilities and now, parenting with a capital "P".

Who's new at the zoo?
Brand-new babies, that's who!
Some popped from their mamas.  Some hatched out of eggs.
Some walked right away on their long, wobbly legs.

Amid all these new offspring, who do tend to hide from their moms and dads, there are three animals at the zoo with nothing to do, the tree kangaroo and the pandas.  It does not matter to them if their children are like them, any kind would be perfect.  When an Endangered Species Rescue truck pulls into the zoo, speculation and hope rise.

The crew at the zoo gathers 'round to see...a box, a box with an egg inside.  None of the feathered friends are willing to try but the tree kangaroo steps right up, placing it in her pouch.  When the egg, after weeks, cracks open, love flows around the unexpected newcomer.

Puffins and flamingos offer assistance as the little fledgling makes its first move.  Still down in the dumps are the panda duo.  Is there no little critter in need of a helping paw or two?  What's that?  Did they hear a mew?

There is definitely something very special about the poetry of Judy Sierra when she's writing about the Springfield Zoo.  Her rhymes have a rhythm, never forced but flowing freely.  When read silently but even more so when read aloud, it's a jazzy, toe-tapping, finger-snapping tale.

Marc Brown is in tip-top form rendering his illustrations on prepared wooden panels with watercolor, gouache and colored pencils. I was captured as soon as I saw the cover, breaking into a smile and opening it to see the happy, curious zoo inhabitants gathered around an egg.  Endpapers with a scratchy, blue background provide a nest for eggs in various stages of opening as a tiny kitten peeks from behind.

The striped lettering on the cover and title page puts the wild in wild as babies sit on top.  With only a couple of exceptions all of the visuals are spread across two pages in colors exuding a glowing warmth; enhancing the theme of Sierra's narrative.  Even when not smiling, which is infrequent at Springfield Zoo, Brown manages to convey a sense of wonder, community and harmony on the faces of the animals.  While I would gladly frame many of the illustrations, if I could frame only two pages, it would be the last two; sheer delight.

Readers are going to love visiting Springfield Zoo again in Wild About You! by Judy Sierra with pictures by Marc Brown.  The more readers discover in nonfiction reading about the animal kingdom, the more they will understand the compatibility shown by the text and illustrations within the pages of this title.  One can't help but think (as I did in the two previous books), how is this like or unlike our world?
Posted by Xena's Mom at 7:12 AM