To open the cover and read the first page of a new book with a mounting sense of anticipation is the best kind of adventure.  In that moment anything is possible; before you know it you are places you've never been with beings you've never known experiencing events, thoughts, dialogues or emotions you find unique or familiar.  That is the lure, the gift of books and the pure fascination of reading whether it's fiction or fact. 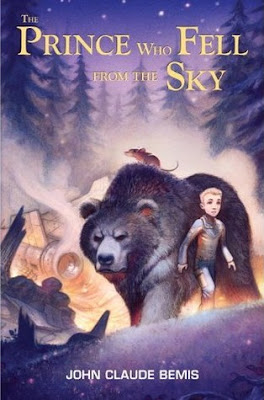 Curiosity and speculation about the future have been an intriguing theme in literature for centuries.  Author John Claude Bemis, creator of The Clockwork Dark trilogy, brings to readers his vision of a possible tomorrow.  The Prince Who Fell From The Sky (Random House, May 2012) shifts the perspective to animals left in a world after a catastrophic event removes all human life.

The Forest was green with summer when the bear lumbered up from the creek bed where she had been cooling off.  As she crested the bank, she paused to sniff. The air was heavy with the scent of new life.
Moist smells. Earthy smells. Flowery smells.
And mixed with them was the sweet aroma of death.

The bear, Casseomae, is an outcast from her own clan, having lost more than one group of cubs, labeling her cursed.  Living in the Forest which is littered with relics from human (Skinless Ones, Old Devils) civilization, she makes her own way without fear.  The iron rule of Ogeema, the leader of the wolves, crosses each and every boundary within the Forest; the Forest having overgrown any remnant of the Skinless Ones' existence. It is said and perpetuated the wolves rid the Forest of the blight of the Old Devils.

One morning agents of the wolves, coyotes, have trapped a rat named Dumpster, who should be living in a nearby city ruin. Casseomae's interception on behalf of Dumpster is suddenly and loudly interrupted by the appearance of a huge flying object roaring to a crash on the Forest floor.  Inside this spacecraft are beings whose should not be.  All are dead but one.

Against her better judgment and the objections of inhabitants in the Forest, Casseomae travels to find a safe place for this human child.  Accompanying her on this quest, is Dumpster searching for the rest of his mischief (group) which have fled the city hoping to find the Havenlands.  They are being pursued with murderous intent by the wolves, coyotes and an assassin; the child must not be allowed to live.

As each page is turned the gap between the hunted and the hunters gets narrower and narrower.  Heart-pounding chase scenes, barely escaping death time and time again, members of the group move closer to what each is seeking.  Navigating in this alien, futuristic landscape with a communication barrier between the animals and child as well as encounters with bewildering and terrifying creatures, increases the tension tenfold as the story races toward a startling conclusion.

John Claude Bemis has built a world both powerful in its suggestiveness and captivating in its possibilities with his imagination and use of language.  Seeing this future portrayed through the eyes of the remaining animals gives credence to (parallels) ecological issues already being faced today.  Detailed descriptions of the setting and the animal hierarchy coupled with the conversations between the characters, especially the snarky comments by the rat, contribute to the appeal of this skillfully wrought story.

"You've not got me yet, you dung-heads," the rat said, twitching his whiskers as he peered down at the circling coyotes.  "You know what you got? You mess with Dumpster and you've got spittin' trouble.  Nothing but spittin' trouble!"

Later in the night she was woken by a scent.  The moon had set, and the Forest was dark and resounding with insect song.  She stepped from the ruins.  The acrid smell was from a canine.

When she reached Dumpster, she saw they were standing on one of those paths, but one much bigger than any she'd seen before.  Toward the setting sun, side-by-side trails of broken rock disappeared into the Forest, each path as wide as a river.  Surveying the other direction, Casseomae was amazed to see that the twin paths rose above the treetops.

The Prince Who Fell From The Sky created by John Claude Bemis is a dangerous journey, by survivors left on Earth intent on reaching their goal, readers will eagerly follow. It defies genre barriers combining science fiction, fantasy and adventure.  I can't help but wonder (hope) if there will be another related title.