As readers of fiction we place our time, minds and hearts in the hands of those authors whose books we choose to read.  As soon as we open the cover of a book we suspend our reality, replacing it with, stepping into, a world formed by words.  Depending on real life and previous reading experiences, we will either be entertained, informed, changed or a combination of the three. 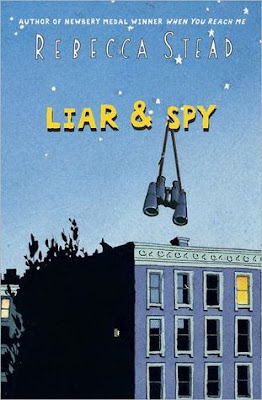 There's this totally false map of the human tongue.

I don't know about you, but learning there is a map of the human tongue (Did we learn that in school?) and it's not the truth, all in a single sentence, has got my attention.  Georges (silent "s"), the main character of this story, is sitting in science class.  Within the next two paragraphs, I'm in for good.  A unit being studied in class is the stuff of legend at this middle school.  Along with the initial sentence, this subject of study is a key focal point around which a significant part of the story revolves.

In my mind learning about Georges's days at school, the strategy of surviving gym class and lunch hours in the cafeteria, the loss of a friend to the "in" crowd which includes a couple of aggravating bully types, the growing friendship with Bob English Who Draws and a PE teacher everyone wishes they had, makes the reader feel as though they are in his skin.  As the weeks progress the verbal taunting, the jabs and bumps, escalate but so does Georges's determination to ignore and avoid.  His strength is more of a magnet for friendship than even he can understand.  This is but only one of several strands in this seventh grader's life to which we are privy.

Georges's Dad has lost his job.  As a result they have had to sell their home, move into a nearby apartment building and his Mom, a nurse in the intensive care unit at the hospital, is now working double shifts.  This altering of family dynamics, his father's distraction with finding new clients and long whispered phone conversations with his mother during the evenings, has left Georges feeling adrift even though it's more than obvious both his parents care for him deeply.  Despite the occasional phone chats and Scrabble message exchanges with his Mom, Georges misses her more each day.

Safer, his younger sister, Candy, and his older brother, Pigeon, live in Georges's apartment building with their pleasant, rather laid-back, parents.  Georges is introduced to them when his Dad jokingly responds to an old-appearing note tacked on a basement doorway---Spy Club Meeting---Today.  Safer, Georges's age, invites and enlists his help in monitoring the movements of Mr. X, another tenant in the building.  Why snoop and sneak?  Safer believes Mr. X may be a murderer.

Georges finds himself in increasingly frightening situations with Safer as the bonds of friendship are tested.  Events at school are racing toward a day which could alter much for many.  His Mom's absence becomes something tangible.  These strands of Georges's life are twisted together so tightly the ending will surprise and astonish you.

Rebecca Stead draws a picture so vividly of this slice of life in present day Brooklyn you believe you are there; Bennie's variety store,  DeMarco's pizza place, Yum Li's Chinese restaurant, the nooks and crannies within the apartment building, the classic areas at the middle school.  All the characters with their finely detailed personalities are laid before us through distinctive dialogue, inner thoughts and the exchange of notes in some form.  Stead's meticulous use of language gives one a sense of unease running just beneath the surface of the story, the characters and setting despite pockets of warmth and humor.

Here are a couple of passages from the book.

First period. Science.
We file in, Dallas and Carter walking close behind me.
"Beep, beep, beep, beep," Dallas says. "Beep-beep-beep-beep."
"What's that noise?" Carter asks.  "Dallas, is that your freak alarm going off?"
"Yeah, it's going crazy. I wonder why.  Oh, look, it's just Georges."
They shove past me, laughing.

Mom calls before bed and doesn't sound that tired.  She asks me all about Safer's family. When I tell her Safer doesn't go to school, she says they sound like really nice bohemians.  When I tell her Safer plans to teach me the secret of truly excellent scrambled eggs, she says they sound like really smart bohemians.  Dad calls them progressive.  Nobody wants to say they're weird.

The meaning of family, what defines a friend, the value of individuality, perception and truth are blended with care and excellence much like the Georges Seurat poster hanging on the wall of Georges's home, all those tiny dots making a breathtaking whole.  Rebecca Stead's Liar & Spy is memorable, timely and uplifting.  I recommend it without reservation.
Posted by Xena's Mom at 7:15 AM