I will readily admit it was the cover that caught my eye.  Two groups of men, who should not be seen together, yelling at one another over a large baseball centered between them was intriguing to say the least.  The title was the final irresistible element. 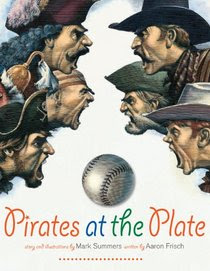 What could the great American pastime of summer have to do with pirates and cowboys?  Pirates at the Plate (Creative Editions) story and illustrations by Mark Summers, written by Aaron Frisch, is one of those books where history is blended with the glories of imagination.  It's where the improbable will have readers wondering if such an event could, or in fact, did happen.

Welcome to the ballyard,
fans.  We're in the bottom of the
22nd inning, score knotted at 47
runs apiece, Pirates at the plate.

The pitcher for the cowboys is none other than Wild Bill but believe it or not, Hopalong Cassidy is warming up in the bullpen.  The Cowboys are in a tad bit of trouble.  Long John Silver is at bat, Calico Jack is on second and (shiver) Blackbeard is next up.

Oh, oh...Long John Silver swings and hits a blazer hard and long into center field.  Giving it all he's got the Cisco Kid is reaching, reaching and reaching.  Will he get it?  He snags it and throws it to the infield.

The tide seems to have turned.  Calico Jack is in serious trouble with Long John Silver running around the bases like a freight train, stealing them as he goes.  This game is clearly getting out of control.

The umpire calls a halt, managers from both sides leave the dugouts.  Before you can say, "You're out!", the two teams engaged in a name-calling contest, are chasing each other around the field.  Wait!  Did you hear something?  Dinner?

Aaron Frisch is a well known name in children's and young adult nonfiction having authored books about sport teams which are rarely on the shelves, depending on the season.  Reading his narrative is like gathering around the radio listening to a favorite team playing baseball on a hot summer day. There is a rhythm to his words, an easiness that reels the reader in immediately.

He has a definite command of the lingo not only for the sport but also for terms associated with the members of the respective teams; throwing heat, windup, hoosegow, bow-legged landlubber.  Cadence is created with the occasional use of alliteration; big-bopping Blackbeard.  Skillful wordplay brings fun and humor to the tale.

The work of illustrator Mark Summers has garnered him numerous awards.  One, the Hamilton King Award for Best Illustration of the Year 2000, was given by the Society of Illustrators, New York. His medium is engravings in scratchboard.

In this title, not only are his illustrations stunning, they extend the text brilliantly.  When we read, warming up in the bullpen, Summers gives us a picture of a cowpoke next to a campfire, hands extended over the flames, surrounded by bulls in a pen.  His single page visuals, framed in white, are a study in a particular character, Wild Bill, Long John Silver, Captain Hook.

Every turn of page gives readers a new marvelous view of his artistic capabilities.  Sometimes his two page spreads will extend just over the center washing off into white space.  At other times the full two pages are used.  He varies placement of text using it as an element in his design.  When you believe he uses white space liberally to highlight his engravings, he throws in another pleasant surprise.

Illustrator Mark Summers' textured, realistic scratchboard engravings teamed with the language of author Aaron Frisch light up the scoreboard in Pirates at the Plate.  With International Talk Like a Pirate Day on the schedule in two days (September 19th every year), this title is guaranteed a grand slam.  Getting into the swing of the words, adapting the attitude of the players, as a read aloud this is a sure winner.

(The ending is top-notch.)

If you want to see more of the outstanding work of Mark Summers, follow the link attached to his name.  The link to the book's title, above, will take you to the publisher's site so you can see inside the book.
Posted by Xena's Mom at 7:52 AM