She's One of a Kind

Every child is unique.  Each is remembered for those subtle, or not so subtle, little details that make them who they are; a physical trait, a personality distinction, a phrase only they would utter.  There are also those children who are like fingernails on a chalkboard; so obnoxious they're funny as long as they're characters in a work of fiction.

In 2010 readers were introduced to one such child, a little girl about to have her birthday.  She is, in the words of the author,

Lulu and the Brontosaurus written by Judith Viorst with illustrations by Lane Smith showed us one persistent, persnickety gal who would do anything to get her way, having a brontosaurus for a pet.  It did not end as she anticipated or as readers might have predicted. 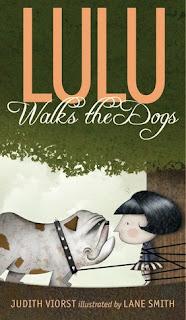 This little bundle of feistiness has returned in all her glory.  In Lulu Walks the Dogs (Atheneum Books for Young Readers) she has her sights set on gaining a possession her parents refuse to fund.    Even parents who give their child nearly everything they want, have to draw the line at ridiculously expensive.

Lulu is aghast her parents would recommend earning the money herself.  Furthermore it irritates her to no end when they make reference to the boy down the street, Fleischman.  Fleischman is the bane of Lulu's existence.

He is kind, courteous, ever so helpful, hardworking, an expert flutist, a straight "A" student and neat as a pin.  His uncanny ability to know something about everything drives her absolutely nuts.  She makes it plain in her no nonsense way, he is to stay clear of any of her money-making enterprises.

Ultimately, Lulu believes walking dogs to be the easiest way to make the extra cash.  To her delight three neighbors respond to her promotional flyers.  Brutus, Pookie, and Cordelia will be her new four-legged morning walking buddies.

Of course, Brutus won't budge, Pookie must have her name pronounced correctly or else and Cordelia...where is Cordelia anyway?  Who should saunter into the midst of Lulu's problems?  It's Mr. Perfect Kid, Fleischman.

Fleishchman being his usual sweet self (almost too good to be true) offers his assistance which Lulu grudgingly accepts.  And so it begins, the trials and tribulations of dog walking this trio and the un-easy (mostly on the part of Lulu) sort of partnership that is formed.  And if you think there is smooth strolling ahead, think again.  After all, this is a story about Lulu.

Judith Viorst's voice, as the narrator, in this title as in the first, is just plain sassy.  Her listen-to-me-I'm-the-boss-of-this-book tone is splendid for the intended audience and anyone else who loves to burst out laughing.  It's not hard to visualize her staring intently into your eyes, demanding your undivided attention as she tells the tale.

Dialogue between Lulu and the rest of the characters, her parents, Fleischman and the dogs' humans could not be funnier.  The pacing is impeccable.  To accentuate a point or pause, a chapter might only contain a single paragraph, sentence or a question and answer time-out section.  But the added treat in this episode is the Money songs.

Here is a single passage from the book.

She was about to add that Brutus was among the everyones she didn't like when his owner said, "You're hired. You're hired. You're definitely hired. And furthermore, because Brutus is on the large side, I'm going to pay you fifty cents extra a day."
(On the LARGE side? Brutus was GIGANTIC---a mountain, a whale, an SUV of a dog!)

Pencil on pastel paper illustrations rendered by award winning illustrator, Lane Smith, make frequent appearances throughout the story.  Their placement as full page spreads, small insets or across two pages add to the emotional flavor of the story; reinforcing the hilarity.  Personalities, dogs' and humans', are emphasized through the definitive facial expressions on their prominent round heads.

If you're looking for a fantastic read aloud or a book that will have an individual reader giggling uncontrollably, then Lulu Walks the Dogs written by Judith Viorst with illustrations by Lane Smith  is the title for you.  Viorst and Smith combining their talents for another slice of Lulu's life is a major plus for readers.  I most certainly hope another volume is in the works.

If you wish to browse inside this title head over to the Simon & Schuster site linked here.