Beyond The Milky Way

Before beginning a review I always go over my marked passages, reread favorite dialogue or gaze in wonder at the illustrations rendered. It says something about the strength of a particular title when perusing, you find yourself again caught up in the story.  Before you know it, a second reading, within a few days of the first, becomes a necessity. 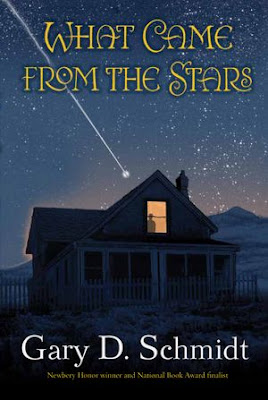 Also noteworthy is if the author has stepped out of their usual mold to venture into another genre and has done it with complete success.  That is the mark of a magician with words; an incredibly skilled artist.  What Came From The Stars (Clarion Books, Houghton Mifflin Harcourt) written by Gary D. Schmidt is such a book.

More miles away in space than our minds can imagine is a place, the home of the Ethelim.  Watching over these people are the Valorim but their days are numbered.  A darkness led by the black-hearted Lord Mondus fueled by the masses of the faceless O'Mondim and a few traitorous Valorim, has spread across the land, is breaching the stronghold called Reced.  Only Young Waeglim remains working with an urgency at the tower forge as the battle rages.  He forms a chain of green and silver binding within it all the stories and thoughts from the hearts of the Valorium, the Art of the Valorium, and sends it traveling forth into the starry expanse.

The necklace lands in the most unlikely of places, the Ace Robotroid Adventures lunch box of a sixth grader at William Bradford Elementary School located in the Milky Way galaxy, in a Solar System circling a Sun, on a planet known as Earth on the North American continent in the town of Plymouth located in the state of Massachusetts.  Tommy, the owner of the lunch box, has problems of his own.  It's been less than a year since the death of his mother; his father no longer paints and his sister no longer talks.  A real estate developer, mother of Cheryl Lynn Lumpkin, school bully, plots to acquire their home on the sands along the ocean for a condominium project.

During a rather embarrassing moment in the school cafeteria, Tommy discovers the necklace placing it around his neck.  Without any conscience thought, the power of this talisman begins to work.  Tommy knows things he shouldn't know, he can do things he should not be able to do, he speaks words from no known language and he creates a creature in the sand, giving it life.

Back among the Ethelim Lord Mondus covets the Art of the Valorium; singing and sending a song out into the vast universe hoping for an answer.  Along the sea in Plymouth strangers arrive, one of darkness and the other of light.  Unusual storms pound the community as fear strikes every heart; someone is breaking into homes, destroying them and leaving the foul stench of rotten seaweed.

Running parallel to the mounting tension in Tommy's community are plans for rebellion among the Ethelim who can no longer tolerate living in constant oppression.  Battles must be fought. Two worlds hang in balance needing a twelve year old boy to conquer his fear, grief and to do what he believes is right.

To spin this tale Gary D. Schmidt begins with a chapter written in the tongue of an ancient language much like storytellers of old, painting a picture of Weoruld Ethelim.  In the following chapter he transitions into modern day Massachusetts with the present day vernacular of middle school students, parents, teachers and community members.  His mastery at moving the story between the two worlds in alternating chapters is a marvel.

In speaking of the Ethelim it's as if we readers are sitting around a campfire listening to an epic story unfold; one which has been passed on from generation to generation.  It is his command of language, his ability to not only understand human emotion but to convey that understanding through his characters to his readers, that acts as the bridge. Each of the many characters contributes an integral part, whether small or large, to the overall narrative.

Patty, Tommy's younger sister, a student in first grade, conveys through her eyes and gestures a full range of feelings.  Three of Tommy's classmates, football loving, James Sullivan, accordion playing, Patrick Belknap, stand-tall, inquisitive Alice Winslow are the best kind of friends to have.  The adults depict the range of people anyone, anywhere might be likely to discover.  That's what I love about Gary D. Schmidt; his ability to cover a full spectrum of personalities and to weave them together in a fascinating whole.

Here are a few selected passages.  It was very hard to choose which to include.

And when Young Waeglim would not reveal where he had sent the Art of the Valorium, the Lord Mondus imprisoned him deep beneath the Reced, where the Twin Suns never shone, where the soft moonlight of spinning Hreth never glimmered.  Young Waeglim did not tremble at his lonely doom, but as he was carried down from the Tower, lower and lower into the depths of the Reced, his eyes searched out each window, as if he might take within himself its light.  And when he came at last to the final pane, then it was that Young Waeglim burst upon the O'Mondim with the might of twelve, and more than a few of the Faceless would never again feel the covering of the cool sea.

Alice Winslow and Tommy and Patty had eaten five elephant ears between them--which they figured was probably more than they should have---and heard the Foxboro Fiddlers perform with their star fiddler fiddling behind his back, and the Andrew Sisters Redux sing a medley of World War II top hits, before James Sullivan found them.
"Am I too late?" he said.
"For what?" said Tommy.
"Belknap."
They looked at him.
"Belknap is playing today."
"Playing what?" said Tommy.
"His accordion."
"In front of everyone?" said Alice Winslow.
"No, he's going to wait until everyone leaves," said James Sullivan.
"That might not be a bad idea," said Tommy.

Schmidt extends his adeptness to the last syllable in the last two chapters tying Tommy's Plymouth, Massachusetts to the Ethelim.  But he does not stop with those two chapters.  He includes a glossary of words spoken by Tommy under the power of the necklace written by Alice Winslow with help from their teacher, Mr. Burroughs.  It is in the final defining sentence that this extraordinary author reveals what I believe is at the center of this story and all his work.

What Came From The Stars by Gary D. Schmidt is high fantasy at its absolute best.  Finely, defined characters, the blending of two worlds galaxies apart, the pure of heart versus the wicked and soulless, journeys by thought and journeys of healing all combine to keep the reader riveted to the pages.  This story soars into the heavens.

I want to leave you with one final thought.  At the 2012 Summer Conference of the Society of Children's Book Writers and Illustrators, Martha Brockenbrough, author of Devine Intervention (reviewed here) sent a tweet out to her followers on Twitter.  When listening to Gary D. Schmidt speak she said--When Gary Schmidt talks, it feels like your heart is being gently held in someone else's miraculous hands.
I couldn't have said it better myself.
Posted by Xena's Mom at 8:12 AM