Sometimes when you read a book and the final page is turned, you flip the front cover back and read it all over again.  You read the words aloud instead of in your head.  You study all the little extra details in the pictures.  You do this because there was a connection, a combination of the two, that drew you into the story. 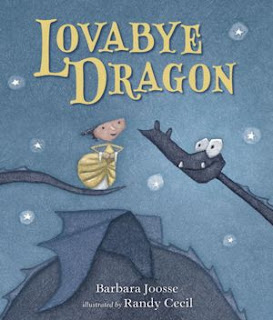 Finding a true-blue friend can be difficult especially if you're a girl longing for a dragon or a dragon longing for a girl.  When one lives in an isolated castle and the other a cave in the snowy mountains, what are the chances of the two ever meeting?   Author Barbara Joosse and illustrator Randy Cecil tell readers exactly how it's done in their new collaboration, Lovabye Dragon (Candlewick Press).

What this little girl cannot know is a dragon asleep in his mountain haven has the exact wish for friendship.  In her loneliness the girl cries and cries and cries.  Her tears become a stream leaving her room, winding through the castle.


Past the mouse, past the moat, past the bog, past the glen and yes, readers, right to the mountain, the very mountain where the dragon lay dreaming, those tears do flow.  Special tears from a special girl wake her longed for friend. The watery trail leads him to his heart's desire.

Oh, the joy of them finding one another knows no bounds.  These two are unstoppable now.  Marching, singing, hiding, comparing and sharing their day passes into evening.

Having a dragon for a pal has its benefits in the chilly darkness, warmth and protection.  Having a little girl for a companion has its benefits as quiet wraps around the two, little songs to shepherd in sleep.  On the next starry night look upward, you might (because wishes do come true) see a shadow pass overhead, a shadow with a rider singing sweetly.

Lilting, lyrical language tells the tale of desires fulfilled.  Barbara Joosse employs the technique of repetition of words to invite readers into the characters' realm, zooming out with her descriptions and taking them on the trail.  Mixed in with the repeated phrases are rhyming words adding to the song quality of the narrative.  Like the silver stream bringing the friends together, the text gently moves through the pages.

Dusty plum front and back endpapers set the tone for the regal setting.  Four times within the story artist, Randy Cecil, frames his illustrations in golden scrollwork, reminiscent of medieval times, to begin, end and introduce.  His oil paintings in shadowy shades of blues, browns, purples, grays and greens give readers, despite the wanting of the two characters, a sense of peace.

The size of the pictures vary to accommodate the storyline, using oval or circular insets to heighten interest, to instill a sense of comfort.  The shapes of his faces, the body proportions, are interesting, funny, lovable and huggable, especially the bug-eyed, thin-necked plump dragon with the toothy grin.  Including tiny details provides a certain symmetry to the story; there are three castle guard toy figures on the girl's bedroom floor, three live castle guards search for her and the dragon.

Lovabye Dragon written by Barbara Joosse with illustrations done in oil by Randy Cecil is an ode to single lonely hearts becoming one in unbridled happiness, soaring among the stars.  This would make the best bedtime story with a snuggly stuffed dragon on hand or as a group read aloud anytime of the day.  Howling winds and pounding rain have been on hand here all night.  I'm taking this with me to bed, reading it for the...hmmm...fourth time.
Posted by Xena's Mom at 7:30 AM