On September 18, 2012 Time released their list of the 50 Best Websites 2012 in an article written by Harry McCracken (@harrymccracken).  Heather Moorefield (@actinginthelib), former chair of the AASL Best Websites Committee was kind of enough to bring it to the attention of her followers on Twitter.  One of the websites on the Time list under the category of News and Information was NASA.gov.

Interestingly enough one of the 25 Best Websites for Teaching and Learning selected by The American Association of School Librarians for 2012 was NASA Kids' Club.  It's included under Curriculum Collaboration, Standards for 21st-Century Learner, 1.3.4 Contribute to the exchange of ideas within the learning community, 3.1.2 Participate and collaborate as members of a social and intellectual network of learners, 3.1.4 Use technology and other information tools to organize and display knowledge and understanding in ways that others can view, use and assess and 4.3.1 Participate in the social exchange of ideas, both electronically and in person.  Within the info for teachers section they state:

NASA will provide a wealth of resources that are safe, fun, and educational for your students.  You can expect them to find reliable information on space-related topics, as well as games, Web Quests, and even chats with NASA experts.

I decided to try every single option on the home page.  The first button on the top left took me to Now In Space---Space Station Crew.  Viewers are introduced to each of the current crew members and given a couple of interesting facts about each.  The commander of the crew now, Sunita Williams from the United States, holds the record for the longest spaceflight for a woman.  You can also get information about past space station missions and past shuttle missions.

The middle button on the top is Window to Earth---What's New, pictures of earth taken from space.  After clicking on that button as well as look here, you are taken to a map of the world with place names on the left.  There are arrows on either side of the globe.  You can select a place from the written names or click on the arrows to spin the globe and choose a place that way.  Icons at the bottom left allow users to turn off the sound and seek help.

When you choose a place it takes you to a satellite image where a geographical/land form term is defined.  You can manipulate the picture by using the tools on the right to zoom in and out.  You can go up or down and left or right once you have zoomed in.

The final frame on the upper right contains 170 photographs that can be viewed in a loop or individually.  They range from views from and of space, to space vehicles, or to geological facts.  Each photograph is accompanied by a short explanatory caption.


The numbered (1-5) colored boxes beneath these activities represent a series of games at different levels, beginning with the easiest on the left.  Level one has three games in the space/geology theme having to do with matching patterns, letter identification and finding what is different between two similar pictures.  There are only two games in level two, building a rocket from a blueprint, matching parts and guessing a number with hints of too high or too low.

Level three has three challenges, adding a grid of numbers to match the changing numbers on the moon, moving the Mars rover through a series of mazes and finding clusters of stars based upon their heat.  In level four there are two tests of wits. The first is a concentration-type matching of clocks to get a plane to take-off.  The second is a bit trickier.  You need to find everyday materials that are spin-offs of NASA creations.


The final set of tests first asks you to choose which planet best answers a question to move a comet closer to the sun.  The second concerns lining planes up on a runway.  That was difficult for me. (But then I'm not a gamer.)


Beneath this series of challenges are four more areas to explore.  They are so complete and detailed you could spend hours here.  They are: 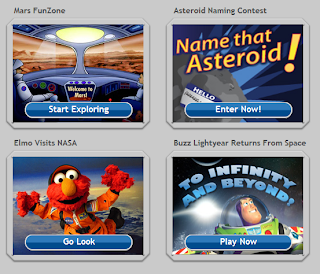 The Mars Fun Zone takes you into the Mars for Kids section but you can also go to other areas within the larger heading of the Mars Exploration Program.  At the kids section are a games and interaction category.  Three games are available, Take a Mars Adventure, Mars Word Find and Weight on Mars.  Send Your Name to Mars, Be a Martian, Send a Postcard to Spirit, Ask Dr. C a Question, Rover Photosynth and Explore the Mars Yard are the interactions.

The Asteroid Naming Contest is exactly what it says.  By December 2, 2012 children under the age of 18 have the opportunity to name an actual asteroid.  Try for a chance to name 1999 RQ36! 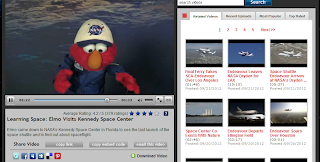 In Go Look  Sesame Street's Elmo visits the Kennedy Space Center.  Take the tour through a series of nine videos with Elmo and Leland Melvin, a former astronaut.  When a video is chosen the next page contains that video plus access to all the NASA videos.  For that video there are buttons to enlarge it to full screen and turn on the closed captioning.  It can be shared via a URL link, HTML embed code, email, Twitter, Facebook, MySpace, Digg, Delicious, and Pinterest.  The video can be downloaded and comments can be made. 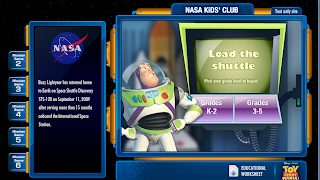 The last square in the lower right-hand corner, To Infinity and Beyond, uses Buzz Lightyear to guide users through a series of six missions concerning the International Space Station.  Each of the missions provides an educational worksheet.

The missions loosely defined are:

NASA Kids' Club is "out of this world".  There is so much information at this site presented in a "kid-friendly" manner you could be "lost in space" for weeks.  I wanted to go back and try everything again as soon as I was finished.  You could not ask for more appropriate resources for the intended age groups with supporting materials for educators and parents than this site provides.  I completely concur with AASL's placing this on the 25 Best Websites for Teaching and Learning 2012.
Posted by Xena's Mom at 7:14 AM