Those who cannot remember the past are condemned to repeat it.
George Santayana (1863-1952)

I've always liked those two phrases but what if the history you knew was slightly off?  What if the facts filling pages of books, the history you had been taught to remember, were not true?  What if for thousands of years history had been manipulated by a powerful entity?

A few short weeks after the ringing in of 2012 an announcement heralding a new series, complete with specialized maps and an online game feature, was made.  Containing seven books in total it would be written by six bestselling authors, James Dashner (books 1 and 7), Carrie Ryan (book 2), Lisa McMann (book 3), Matt de la Pena (book 4), Matthew J. Kirby (book 5) and Jennifer A. Nielsen (book 6). 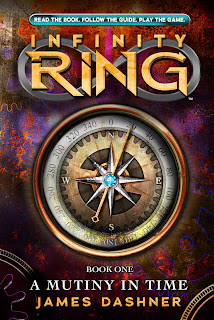 A Mutiny In Time (Book One, Scholastic) starts off running and never looks back.

Dak Smyth sat on his favorite branch of his favorite tree, right next to his favorite friend, Sera Froste.  Not a bad way to spend a Saturday afternoon, he thought.

Fifth graders Dak and Sera are not only best friends but geniuses, nerds in their respective areas of interest.  At the most inopportune times, Dak can't help but give small verbal dissertations on aspects of history.  The methodical, organized calm of a science lab is pure heaven for Sera.

In short order escaping death when an earthquake strikes, during a class field trip to the Smithsonian Museum in the capital city of Philadelphia, becomes the least of their worries.  When his parents leave on one of their fairly predictable weekend trips, Dak takes the keys to their lab knowing Sera will enjoy spending time there.  Inside the lab they discover a puzzle and a figure eight shaped metal object encased in glass, The Infinity Ring.

When his parents are told what the two have done their anger and fear for all their lives nearly overrides the good news, Sera has completed the formula, the program necessary to travel in time.  Before Dak and Sera can comprehend that his parents have vanished during an initial test of the device, the lab is invaded by people dressed in black from head to toe.  Hoods placed over their heads, the two are taken and driven to what they can only imagine is SQ headquarters.  SQ controls everything... worldwide.

To their surprise they have been removed from the lab for their own protection by a group known as the Hystorians, formed by Aristotle who believed there were Great Breaks in history, who believed that one day time travel would be possible to fix these obstacles placed in the flow of events.  Brint Takashi and Mari Rivera, heads of the Hystorian team, fear the Cataclysm (a natural world gone wild, breakdowns in the grid, stronger Remnants, unexplained memories) is quickly approaching. An explosion rips through the Hystorian stronghold.  It's not the Cataclysm...the SQ have arrived.

Riq, a sixteen year old specialist in languages, Dak and Sera warp from the mass confusion and certain death in the nick of time but ill-prepared, having only the Infinity Ring and a small handheld computer, a SQuare.  Whisking from the pyramids of ancient Egypt to 1492 Spain, the trio are determined to complete their first fix.  Just as the Hystorians have been preparing for their arrival for generations, so too have the agents of the SQ, Time Wardens. One will protect them, the other will not hesitate to kill them.

Uncertainty about their exact task, fearing anyone could be working for the SQ and the lack of time stalk them as they become part of the crew aboard the Santa Maria.  Tension at every turn of page, mounting dread and non-stop twists propel the action forward.  In the final two pages readers will start to breathe normally again only to be startled by the very...last...line.

James Dashner certainly knows how to spin a story filled with non-stop action, appealing characters and hints of humor.  Cliff-hanger chapter endings, dialogue and thoughts that ring true and the mix of history and science through time travel, are a winning combination in his more than capable hands.  The interplay of Dak and Sera, who've known each other so long thoughts can be conveyed in a glance, against the snarky hostility between Dak and Riq is an interesting, entertaining element.

It's coming, all right.  The Cataclysm is coming, and we'll all wish we were dead long before it kills us."

"Yeah, I know," Dak interrupted.  "Easy. Piece of cake. Like ...naming the presidents in order of how old they were when they got elected.  Kid's stuff.  But how do you know for sure that it does work?"
"Because all the formulas are balanced.  The mechanics of it make sense now.  I'd go into more detail, but based on how riveted you were by my earlier explanations, I think I'll spare you the pain. But I know it works.  The same way you know that two plus two is four."
"Thanks for keeping it at my level. Anyway, what do we do now genius?"
A huge smile lit up her face.  "We tell your parents all about it."
He suddenly wanted to throw up and run to China.

"What a weirdo," Dak said. "He could sleep on the tip of a weather vane."

Infinity Ring, Book One, A Mutiny In Time written by James Dashner is a gripping, science fiction adventure that will have the intended audience eagerly awaiting the next installment, Divide and Conquer, set to be released in November of this year.  In the meantime a top secret, only to be opened after completing a Mutiny In Time, guide and map is tucked inside the front cover.  Readers are encouraged to use it and join the game at the official Infinity Ring website.

By following this link readers can read and listen to excerpts from this title as well as view other related media.

Here is a series of videos.  The first introduces the authors.  The second is a combination of the characters' quest in the books and the first fix in the game.  The third is a student interview of James Dashner.