Thirty years ago a community in Michigan began what has become an annual tradition, Applefest, held on the second weekend in October each and every year in downtown, Charlevoix.  The street is lined with orchard vendors displaying as many different shades and varieties of apples as Mother Nature painting her colors across the surrounding forests.  It is a celebration of a fruit spread through the creation of nurseries by a man commonly known as Johnny Appleseed. 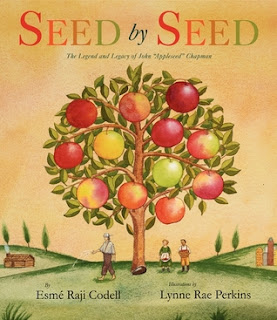 Yesterday, two hundred, thirty-eight years ago, a man named John Chapman was born.  His status in American history has grown to that of hero.  Seed by Seed:  The Legend and Legacy of John "Appleseed" Chapman (Greenwillow Books) is a labor of love by author, Esme Raji Codell and author/illustrator, Lynne Rae Perkins.


In a present day city we see a girl and boy looking out a window with all the changes from progress reflected outside in the cityscape and inside their home.  As the narrator speaks the two find themselves (as we are) transported back to an era with a slower pace; wagons instead of cars, dirt roads, axes not chainsaws for the cutting of wood, fires for warmth.  Walking through the snowy woods the two see ahead into a new season, a season of beginnings.

From the date of John Chapman's birth we are fast forwarded to how he viewed his purpose, how he lived his life and what it means to all of us today.  Shown to us is a man who walked the talk:

For these five beliefs readers are provided with supportive pieces from this man's daily life.  Chapman's clothing was hand-me-down or made from coffee and potato sacks.  He shared his books by ripping them up by chapters to circulate to people he met on his travels.  Can you imagine the kind of man who would save mosquitoes from the flames of a fire?

In order to protect the Native Americans and settlers from one another he perfected a plan for peace.  Chapman may have taken small steps but he covered large areas; his nurseries stretched for more than one hundred thousand square miles.  Where are the boy and girl to whom we were first introduced?

Seed by seed, deed by deed.

Will they, will we, make a difference today as John Chapman did hundreds of years ago?


Esme Raji Codell, a proud honorary member of the Johnny Appleseed Society, composes her discussion of this man through poetic prose that allows readers to step through a window into his world.  She aptly compares our current world with the world of John Chapman using sensory sentences.

Maybe you could catch the creaking of a wagon wheel,
straining against the ruts in the road...

What she has chosen to share with her readers is exactly what we need to know to make this man alive for us today, what makes him someone we would want to know and what gives him a prominent place in our past.


Using watercolor and gouache Lynne Rae Perkins's rich illustrations provide the ideal depiction of the change from present day to the past.  The shifting of time from an apartment building to Johnny Appleseed sitting on a fallen tree in front of a fire, snacking on an apple, flows with purposeful ease.  Altering between single-centered illustrations on a page, two-page spreads, full-page bleeds and varied smaller groupings, Perkins matches Codell's pacing.

To bring more realism to her pictures Lynne Rae Perkins has experimented with other materials.  Her endeavors to transport readers to the here and now of then are notable.  In the section on Use what you have, the background for the text is burlap.  To highlight Share what you have an old book separated into chapters showcases the words.  A detailed woodcarving becomes a broad eye-catching heading. A breathtaking, exquisite embroidery spans two pages to picture the final phrase.


Esme Raji Codell and Lynne Rae Perkins have created an informative, thoughtful portrayal of a man who made his mark in their title, Seed by Seed:  The Legend and Legacy of John "Appleseed" Chapman.  As part of the title verso Codell has included a list of selected resources and acknowledgments.  On the final page is an activity that could be done in the classroom or at home along with a recipe for apple pie.

Be sure to visit each of the websites linked to the author's and illustrator's names at the beginning of this post.  Their discussions about this book are wonderful.
Posted by Xena's Mom at 7:05 AM