Where Eyes Can Not See

With a shortage of snowfall in northern Michigan I have been craving those crisp, clear, windless days of snowshoeing and cross-county skiing in the woods with my dog, Xena; days when you stop to rest surrounded by silence, only broken by the occasional inviting call of a chickadee or the persistent tapping of a hungry woodpecker.  On those days it's as if life has stopped; resting until spring. Over and Under the Snow by Kate Messner with art by Christopher Silas Neal reveals a world beneath that quiet, a world full of comings and goings. 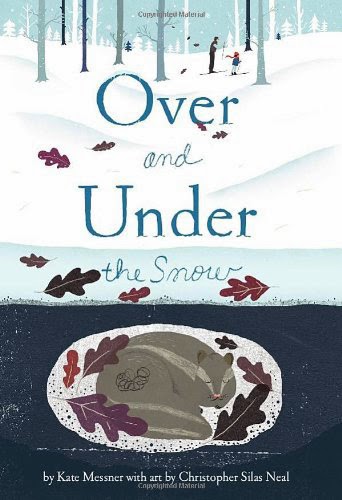 Over the snow I glide. Into woods, frosted fresh and white.

Readers follow a young girl's narration as she and her Dad cross-country ski through a winter wonderland.  A quick glimpse of a vanishing squirrel's tale prompts a question about where he went.  Her Dad replies that he went under the snow; further explaining...

"Under the snow is a whole secret kingdom, where the smallest forest animals stay safe and warm."

Beneath their journey a red squirrel, a shrew, deer mice, a vole, bullfrogs, beavers, a chipmunk, a black bear and a queen bumblebee forge for food, rest for the day or slumber until spring.  The great horned owl like a sentinel waiting for food, a trail of deer tracks leading to a melted patch of snow, an almost invisible snowshoe hare gazing from under a spruce branch, and a red fox listening for a meal, add to the marvel of their travels in this snowy season.  As the moon rises in a starry sky the two make their way toward a roaring fire where a supper of hot chocolate, hot dogs and roasted marshmallows awaits.

Closing this day Mom, Dad and daughter head home where in bed under her blankets the girl dreams of those beings whose world in winter is under the snow.

Kate Messner takes us on a day trip with a parent and child employing text that flows seamlessly as it informs but also brings readers into the realm; it's like you're riding in a coat pocket peering over the top.  With details and a rhythm reminiscent of the most engaging of poetry, we wander the woods in wonder and appreciation.

Over the snow I glide, past beech trees rattling leftover leaves and strong, silent pines that stretch to the sky.

Complimenting her story the mixed media illustrations of Christopher Silas Neal evoke the season, its inhabitants, in earthy hues of chilly blues, dark browns, grays, dusty greens and black with splashes of color.  The liberal use of white space draws readers right into this joyful jaunt as do the endpapers done in a snowflake pattern on deep sky blue.  True to life depictions of creatures over and under the snow invite closer inspection with their museum like quality.

Of particular interest is an interview that Kate Messner conducted with illustrator Christoper Silas Neal about the process he used in creating the art for this book.

At the book's end each animal mentioned in the text is further discussed following an author's note.  A small bibliography of resources for additional reading on winter and animals is included.

Kate Messner and Christoper Silas Neal have created an idyllic title for any time of the year but, like a cozy comforter, perfect for curling up and sharing on a winter's day or night.  Readers, like myself, will be watching with new eyes the next time they explore winter's world, hoping to see what they can see Over and Under the Snow.  I am certainly wishing to see more from these two talented artists.
Posted by Xena's Mom at 6:19 AM