This Is Truly The Wonder of Wonder

Initially it was brought to my attention by librarian, blogger at Watch. Connect. Read.  and tweeter, John Schumacher.  I had no idea what to expect, but as I gave a day-to-day update to my students it was clear to me, I was reading what will be one of the best books of 2012.  As I said to my students, my copy of this author's debut book looks like a post-it note porcupine; filled to the brim with notable quotables. 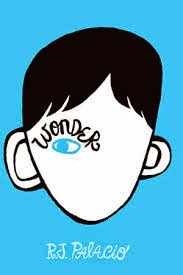 Before I had even finished the first page of the first chapter of Part One August, two post-it notes had been placed.

August Pullman is about to begin fifth grade at Beecher Prep.  He has been home schooled up to this point not because of his facial deformities but for his twenty-seven surgeries; so many surgeries for one so young.  Three students are asked to assist and guide Auggie around the school prior to the first day, Jack Will, Julian and Charlotte. One will become his best friend, another will show their true colors and another will yo-yo in and out of his world.

Teachers at Beecher Prep are for the most part the kind I had in school; the kind every child should have in school. One noteworthy teacher, Mr. Browne of English in room 321, reminds students on the first day of school about the plaque on the outside of the school building.

"It says: 'Know Thyself'.'" he said, smiling and nodding.  "And learning who you are is what you're here to do."

Mr. Browne has the students write in their notebooks Precepts for each month.  His September Precept is:

When given the choice between being right or being kind, choose kind.

They will discuss these statements and write about them at the end of each month.  How fortunate for Auggie, that Mr. Browne is his teacher.  I liked reading about teachers that think beyond their subject area; teaching people instead of their major or minor.

Before I go any farther I need to talk about August's family. It was a difficult decision for his parents to place him in a public school.  In fact initially they did not agree, but August Pullman could not have been born to two more compassionate, understanding and supportive people; readers know this for the incredibly realistic and heartfelt dialogue between the parents themselves and with Auggie.

Their older daughter, Via (Olivia) is beginning high school.  She has been a fierce friend of Auggie's from the moment of his birth.  Despite the tenuous nature of some but not all friendships she has forged (many leave when they see August for the first time) she loves him with all her heart.  The final member of August's family is the dog named Daisy who sees him as few do; who sees his soul.

As each month of the school year progresses, presenting unimaginable trials and small triumphs, Palacio chooses to present the narrative from other character's viewpoints:  first August, then Via, followed by Summer (the first student to sit at Auggie's table during lunch), then Jack, Justin, Via's new boyfriend, back to August, then to Miranda, Via's best friend, and back to August for the final chapters. This changing of perspective brings a poignant humanity to the story; each sharing the shift in their lives because of August; how his presence is reflected in the choices they make.  One of many paragraphs that stands out is the final one in Justin's chapter; an expression of hope. (Interesting that Palacio choose to have his chapters all written in lower case much like texting.)

my head swirls on this, but then softer thoughts soothe, like a flatted third on a major chord. no, no, it's not all random, if it really was all random, the universe would abandon us completely. and the universe doesn't. it takes care of its most fragile creations in ways we can't see. like with parents who adore you blindly, and a big sister who feels guilty for being human over you. and a little gravelly-voiced kid whose friends have left him over you. and even a pink-haired girl who carries your picture in her wallet. maybe it is a lottery, but the universe makes it all even out in the end. the universe takes care of all its birds.

There are moments when as a reader:  your heart will break (I sobbed at one point and tearfully read the closing pages), you will feel your blood boil at the sheer cruelty of some people who have the ability to sway many, you will laugh out loud at the true-to-life humor interspersed throughout, you will cheer for the strength, wit and perseverance of August and you will nod your head, fist upraised proclaiming yes, yes, yes, when digging deep, students in August's school find the good that they have inside themselves.

Wonder by R. J. Palacio is one of those books that once read will be picked up repeatedly; particular passages to mull over in one's mind. (I've read it twice now.) While there are numerous references made to current books and personalities within this story, the message of this book knows no time limits.  It reminds us a kindness, no matter how small, has the capability to change everything; that one kindness creates another and another without end.  Uplifting, beautiful, extraordinary, this book asks us to look inside one another for the wonder that each of us is.

The video below is R. J. Palacio reading one of the earlier chapters in her book.