Soaring Through The Streets

A long standing tradition in my home, as I am sure is in many homes throughout the United States, if not in some corners of the world, is the viewing of the annual Macy's Thanksgiving Day Parade.  Through extensive planning no matter what is on the menu I will find a way to watch even if I am craning my neck from the kitchen into the living room.  In fact, given my birth date, there has not been a year in my life that I have not been able to watch the parade (with the exception of those years before we had a television).  Fascination with the gigantic balloons floating along the streets of New York City has been the big draw for me. 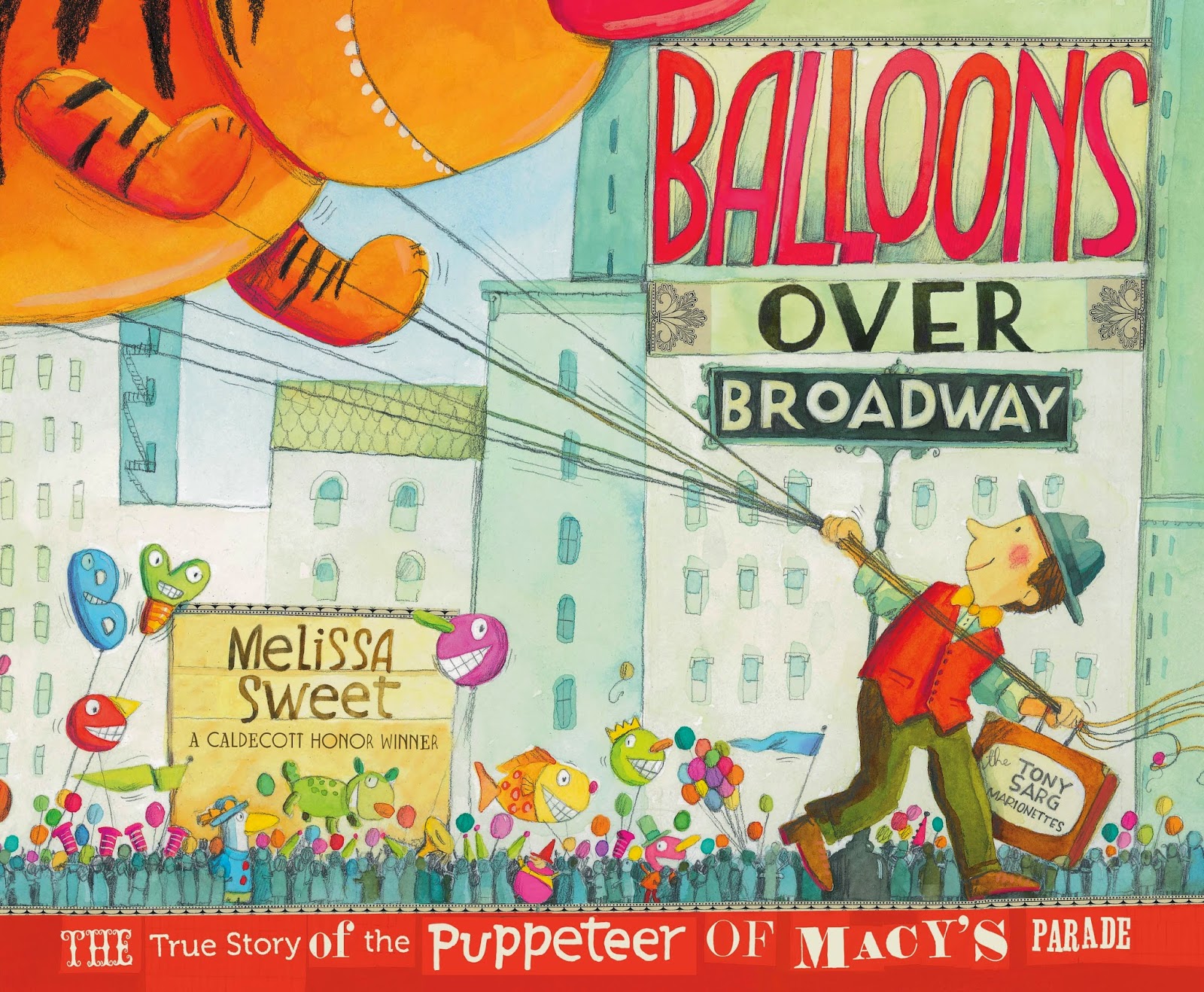 The list of notables is long but a few awards garnered by the November 1, 2011 release of Melissa Sweet's Balloons Over Broadway:  The True Story of the Puppeteer of Macy's Parade are:

National Council of Teachers English Orbis Pictus Award-promoting and recognizing excellence in the writing of nonfiction for children
and
Robert F. Sibert Informational Book Medal Winner 2012-awarded annually to the author(s) and illustrator(s) of the most distinguished informational book published in the United States in English during the preceding year.

From the time he was a little boy, Tony Sarg loved to figure out how to make things move.  He once said he became a marionette man when he was only six years old.

By recounting Tony Sarg's route from child tinkerer, to marionette maker of life-like puppets in London, England, to having his own marionette show on Broadway in New York City, and his eventual invitation to design the first form of movable puppets for Macy's store windows during the holidays, readers begin to see the evolution of the Macy's Thanksgiving Day Parade from the inside out.  One of the more interesting pieces of information in this title is the reason for the original Macy's parade; many of the employees were immigrants missing their own holiday customs of celebrating in the streets.  As an immigrant himself, the son of a German father and English mother, Tony was more than happy to design this first parade taking place in 1924.

Several years later when animals borrowed from the Central Park Zoo for the annual parades began to frighten the child viewers along the parade route, it was requested that Tony devise some sort of puppet to replace them.  From large rubber air-filled objects supported on the ground by wooden sticks Tony's designs expanded and grew to be rubberized silk shapes filled with air and helium controlled by ropes allowing them to rise so all could see their wonder.  Their animation amazed crowds; handlers were even able to get them under the overhead train line, the El.

Beginning with an expansive, cheerfully-hued watercolor portrayal of the Macy's Thanksgiving Day Parade with Tony Sarg in the forefront across the cover and jacket, Melissa Sweet sets the stage for a remarkable peek into the past.  Differing front and back endpapers done in a scrapbook collage of creative remnants (fabric, thread, wooden pieces), sketches, original pages from The Tony Sarg Marionette Book and newspaper clippings announcing the Macy's parade in 1933, cause readers to feel as if they are stepping through a time warp into Tony Sarg's studio and workplace.  Throughout Sweet uses a combination of her watercolor illustrations with varying media, altering text types and styles, using toys from childhoods' past (which she made herself for this book) and page layouts reminiscent of a designer's journal.  At every reading I guarantee new details will be discovered; details reflective of the research conducted by Sweet and her significant talents as an author/illustrator.

At the close of the book Melissa Sweet provides additional information about Sarg in her Author's Note including remarks about the art she created for her pictures.  A bibliography and sources encourage readers to delve more deeply into the man behind the magic of the Macy's Thanksgiving Day Parade balloons.

Balloons Over Broadway:  The True Story of the Puppeteer of Macy's Parade is an accomplishment that raises the bar on nonfiction titles able to be enjoyed and appreciated by children of any age and for those of us that are still and always will be kids at heart.  This is truly an information sensation.

Two interviews of Melissa Sweet which are well worth reading are:  Seven Questions Over Breakfast with Melissa Sweet conducted by Julie Danielson at Seven Impossible Things Before Breakfast on January 21, 2010 and a more recent one by Christine M. Heppermann at The Horn Book, Five Questions for Melissa Sweet on November 3, 2011.
Update: I discovered the publisher has an activity kit.

Follow the link to Melissa Sweet's website attached to her name above for a colorful tour of her world and loads of extras.
Posted by Xena's Mom at 6:28 AM