There Is Something Extraordinary Going On

yarn
1 a:  a continuous often plied strand composed of either natural or man-made fibers or filaments and used in weaving and knitting to form cloth

2 a:  a narrative of adventures; especially:  a tall tale
Merriam-Webster

I can't really remember when I started to knit but by the time I finished high school through college, I could knit two, purl two with the best of them.  That is not to say though, in the beginning, a sweater might have fit Fat Albert better than a child relative for which it was intended.  Eventually my artistic feats knew no limits; fancy ski hats, cabled scarves, patterned sweaters, comfy slippers and even numbered wood covers for golf clubs. 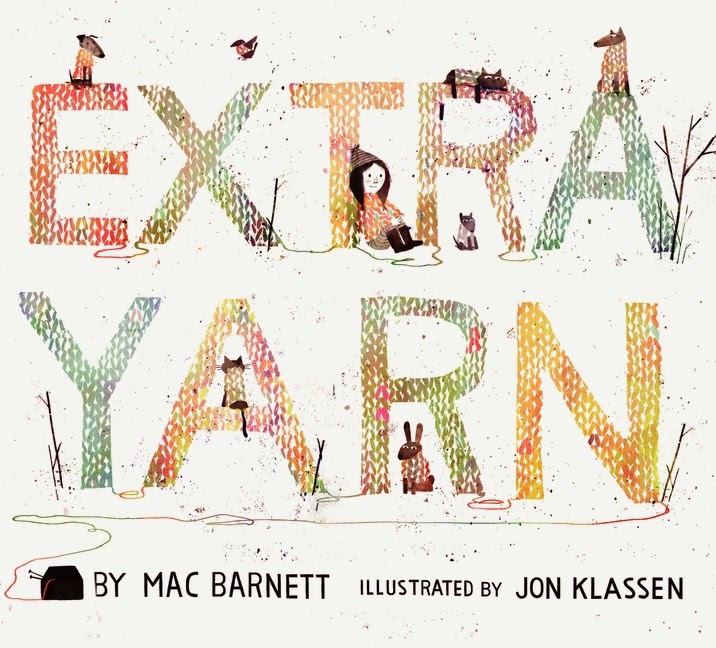 As any artisan knows with each completed project the inevitable leftovers of varying lengths, colors and textures begins to grow.  In Extra Yarn (Balzar + Bray) by Mac Barnett (Oh No!:  Or How My Science Project Destroyed The World) illustrated by Dan Santat, Oh No!: Not Again!:  (Or How I Built a Time Machine to Save History)(Or at Least My History Grade) illustrated by Dan Santat, Mustache! illustrated by Kevin Cornell, and Chloe and the Lion illustrated by Adam Rex) illustrated by Jon Klassen (The Watch That Ends The Night:  Voice from the Titanic by Allan Wolf, The Incorrigible Children of Ashton Place by Maryrose Wood and I Want My Hat Back), a cache is discovered, or perhaps left to be discovered by a very special girl.  Her accomplishments, what she chooses to do, are legendary; the stuff of the best kind of folktale.

On a cold afternoon, in a cold little town, where everywhere you looked was either white of snow or the black of soot from chimneys, Annabelle found a box filled with yarn of every color.

Annabelle goes right home and knits herself a sweater.  With the remnants her dog, Mars, is soon sporting a stylish matching sweater of his own.  There is still more yarn.

A neighborhood boy poking fun at Annabelle and Mars is quickly clothed in a new sweater as is his dog.  Believe it or not, there is more yarn.  And so it goes.

Annabelle's needles are busy making sweaters for her classmates, a cranky pessimistic teacher, her mom and dad, Mr. and Mrs. Pendleton, Dr. Palmer and little Louis.  Within no time at all everyone is wearing a creation by Annabelle except for Mr. Crabtree who never wears a sweater.  She makes him a hat.  Guess what?  The yarn has still not been depleted.

Dog, cats and other animals (like a familiar bear and rabbit) and birds, too, get knitted garments.  With a seemingly endless supply objects not normally clothed in yarn like mailboxes and houses are covered in an array of colors.  Her town is hardly recognizable.

Annabelle's fame spreads and catches the attention of a clothes horse archduke.  Despite his phenomenal monetary offers, Annabelle will not part with her box.  In the timeless tradition of bullies,  the archduke hires three robbers to steal the box in the dead of night.  Box in hand over the snow to the docks,  the archduke sets sail across the sea for his castle.

Cozily settled in his room what he finds in the box is unexpected to him but makes perfect sense to readers.  Angrily tossing it out the window it lands on an ice floe drifting back to where it belongs.  Magic in the right hands can transform everything for the greater good of all.

Impeccable pacing, spot-on dialogue and a storyline that flows as naturally as sunrise and sunset are skills employed adeptly by Mac Burnett.  Annabelle's indomitable spirit, her perseverance, will have readers silently cheering.  Her goodness played against the lack of goodness by the archduke is flawless.

In an interview at Julie's Danielson's Seven Impossible Things Before Breakfast, Seven Questions Over Breakfast with Jon Klassen he remarks that his usual medium for his illustrations is either inks, gouache or acrylics but he assembles and alters them digitally afterward.  The knitting that colorfully covers everything in Annabelle's world looks like the real deal; vibrant natural colors that change texture and hue seamlessly.  There is a lightness, an uplifting quality, to these pictures letting readers know this is no ordinary story by any means.  The detail where some characters' sweaters are joined by a single strand adds to the impression that not only is this yarn without end; there is a connectedness throughout the tale.  Expressions and posture of the animals are...well, I love them.

Author Mac Barnett and illustrator Jon Klassen have created a "yarn" in the grandest tradition, Extra Yarn, a timeless classic, beautifully rendered in words and visuals.

By following this link to HarperCollins readers can view portions of this title; truly a feast for our eyes and minds.
Posted by Xena's Mom at 6:21 AM