Hail To The Chief

Try to picture stepping away from your life for four whole days; unplugging from all the technology and fast-paced demands of your day to day existence.  Let's take this a step further; those days will be spent in a wilderness area without the normal comforts of home and hearth.  In The Camping Trip That Changed America:  Theodore Roosevelt, John Muir and our National Parks (Dial Books, January 19, 2012) written by Barb Rosenstock and illustrated by Mordicai Gerstein appreciation develops for two visionaries who did that, so today we can too. 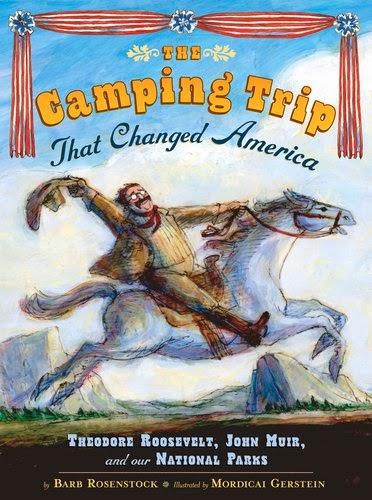 Teedie and Johnnie didn't have much in common---but they shared a love of the outdoors.  They both loved a good story, too.  And that was enough to change America.

Using names affectionately given to them by their families Rosenstock introduces readers to Theodore Roosevelt and John Muir.  Theodore Roosevelt was the 26th president of the United States living in Washington, D.C. at the White House with his family, having grown up as a member of one of the wealthiest, well-established families in New York City.  John Muir, a world-renowned environmentalist with a deep love for the Yosemite wilderness in California, living in a farmhouse near that area grew up as the son of immigrant farmers in the Midwest. Observations during his many solitary travels appear in volumes illustrated with his drawings.

In March of 1903 the President picked up one of Muir's books to relax and read in the evening.  Muir's plea to preserve the wilderness at the book's end caught the attention of Roosevelt.  It prompted him to pen a letter to the naturalist asking that they go camping in Yosemite.

Ever the politician Roosevelt's train moved toward its western destination making stops in cities and towns along the way until it reached Raymond, California on May 15, 1903.  He made several other stops to speak before crowds with Muir before the two rode off on horseback together.

"I feel like a runaway schoolboy!" Teedie laughed as his horse galloped along.

Over the course of the next several days the two explored the vast untouched areas of the giant sequoias in Mariposa Grove camping near the Grizzly Giant, rode up to Glacier Point, Muir explaining to his companion how glaciers cut through the rock to form the valley spread before them, awoke with five inches of new snow covering them and the mountaintop, and traveled down through the Yosemite Valley viewing its rock formations such as the Half Dome and El Capitan.  Impressed with Muir and what he had seen President Roosevelt returned to Washington, D. C. determined to preserve all for all time.  Creating additional national forests and parks and wildlife sanctuaries, Roosevelt

saved more wild land than any president in history.

Interestingly enough the two were never together again but continued to correspond with personal letters until Muir's death.  Rosenstock concludes with the naming of the final resting place of both beneath the trees in areas they loved so well.

Barb Rosenstock unfolds the story of this historic meeting as if we are gathered about a campfire in the woods of Yosemite, she explaining how these two prominent men, each experts in their own arenas, came together united by their love of our natural world.  In an author's note she begins with defining quotes from each followed by what is true and the conversations between the two which she believes might have taken place.  Source notes are included.

Mordicai Gerstein, winner of the 2004 Caldecott Medal for his book, The Man Who Walked Between the Towers, recreates this segment in American history with paintings in a style that is all his own; lively animated vignettes of an event with a far-reaching, timeless impact.  Capturing the unending exuberance of Roosevelt and the passionate guardianship of Muir readers can enjoy the exhilaration of the days they spent together camping.  On the first page portraits of both as well as a scene from Yosemite are framed in red, white and blue banners signifying the importance to America of not only this meeting but of how both men's lives enriched our national heritage.

The illustration on the cover is repeated within the narrative to accompany Roosevelt's quote noted above; a single two page spread that captures the soul of this story.  This is followed by another two page spread; readers turning the book to view a vertical scene of the giant sequoias, the two horseback riders tiny at the base of the trees.  Having been to see these trees myself, Gerstein completely conveys their majesty.

During their evenings camping out in the open the imagined conversations around a crackling, campfire are illustrated with an intimacy; a camaraderie evident in the facial expressions, hand gestures, and play of shadows.  What they may have said are shown as smoke clouds coming from the fire above their heads, small pictures illustrating their words.  The final evening they are together is a powerful image, the two sitting face to face deep in discussion united by their common goal of protecting our flora and fauna from progress gone unchecked.

Author Barb Rosenstock and illustrator Mordicai Gerstein illuminate a portion of our history in The Camping Trip That Changed America:  Theodore Roosevelt, John Muir, and our National Parks informing and captivating readers.

I've lost count of the number of times I've read this title so far but I continue to marvel at the gifts displayed by authors and illustrators such as Rosenstock and Gerstein that breathe life into the past making it accessible and real, not just dry words on the printed page of a history textbook, for any age.  I, personally, have pursued further research based upon this title marveling at the accomplishments of these two men.  And is that not what we want our students to do?  While the driving idea behind this title is the camping trip you have to wonder if the two would have ever even met if Roosevelt had not read Muir's book; the power of the printed word.  On this Presidents' Day 2012, I thank these two gifted artists.  I love this book.
Posted by Xena's Mom at 9:38 AM