Another Legend Rises To The Rescue

Titles written by Peter Abrahams have caught my eye repeatedly, Reality Check, Winner 2010 Edgar Award Best Young Adult Mystery, the Echo Falls series (Down The Rabbit Hole, 2006 Agatha Award Winner, Best Children's/ Young Adult Fiction, Behind the Curtain, finalist for the 2007 Agatha Award, Best Children's/Young Adult Fiction and Into The Dark 2008) but it was not until Robbie Forester and the Outlaws of Sherwood St. was released January 19, 2012 that I read one of his works.  But I will be quick to amend that statement; until just a couple of days ago I did not know that Abrahams is writing under the pen name Spencer Quinn.  I have read two of the books in Quinn's Chet and Bernie mysteries, Dog On It and Thereby Hangs a Tail.  What I can say from reading these three books, without hesitation, is that Peter Abrahams gives his readers tales that will have them flipping pages with the speed of light wondering when they will be able to breath normally again. 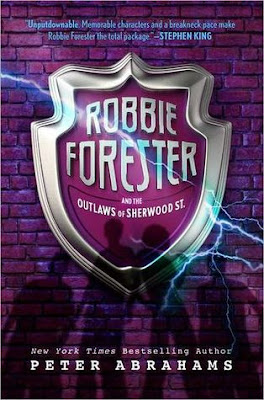 He begins his newest title for middle grade readers with the oddest combination; an elderly homeless woman and a basketball game won at the buzzer.  As Robbie Forester exits the subway on her way to a private school, Thatcher, in Brooklyn she notices the homeless woman usually sitting by the newsstand not looking quite right; she of all the passersby goes up to her.  After speaking briefly, amid the hustle of getting the woman into an ambulance Robbie notices that a bracelet slips from her wrist onto the street.  As she picks it up the woman looks right into her eyes, the ambulance speeding away.

At the end of the school day during a basketball game, coming down to the final seconds, one of the star players, Ashanti, is fouled without the referee making the call.  Robbie finds herself in the unenviable position of making a game-winning shot.  But without her glasses most of the action is a blur.  Suddenly intense pain, an electricity in her head, clears Robbie's vision; a reddish golden light appears showing an exact path to the basket.  Swish...two points made to win the game.

(If this does not have your attention, you need to check to see if you have a pulse.)  Puzzled by this event Robbie makes her way to the locker room.  It's when she is leaving that the bracelet placed in her pocket earlier draws her attention.  The single heart dangling from the braided circle is almost too hot to touch.

Walking home another character, from her former public school, Tut-Tut, a Haitian, plagued by a stutter causes her to stop admiring his beautiful chalk drawings; again for a moment a strange feeling washes over Robbie.  Readers are quickly introduced to Robbie's parents, both hardworking, her father a stay-at-home writer with two published titles and her mother, an attorney in a large firm downtown.  When taking her rather timid but large dog, Pendleton, out for his evening stroll, another rather strange incident occurs.

On Saturdays Robbie and her mother volunteer at a soup kitchen called Bread.  But this particular Saturday is different; the kitchen closed they discover due to a lack of funds.  The rent has been raised to a ridiculous amount by The New Brooklyn Redevelopment Project, another money maker by Sheldon Gunn, the third richest billionaire in the world.  Robbie's mother is indeed shocked but unable to help; Sheldon Gunn is a client of her firm.  What ensues are two other episodes that leave Robbie ill, her parents frightened and Ashanti privy to her secret.

Robbie's ability of acquiring incredible vision while teleporting objects, Tut-Tut loosing his stutter and Ashanti finding she can levitate, even mild-mannered Pendleton transforming in the presence of evil, are uncommon powers to say the least.  Injustice, it would seem to the girls, is what triggers this "magic".  By going around the neighborhood they locate many more tenants that are being forced to vacate; those that don't are threatened by Egil Borg, a member of Robbie's mother's firm, with less than stellar ethics.  Enlisting the help of home-schooled super geek, Silas, the team is formed and the hunt is on.

By any means Sheldon Gunn must be stopped.  Money is to be taken from the rich and given to the poor; if two heads are better than one than this foursome plus one canine can score.  This group gives it their all but not before fires are set by a pyromaniac and Tut-Tut and Robbie are close to death.  A smuggled ride aboard Gunn's yacht grows more harrowing by the minute with an ending that flies to a heart pounding finish.

Peter Abrahams has a definite way with words that creates tension to the max knowing when to slide in the precise amount of humor to give characters authenticity.  Abrahams does not skirt around hard issues but looks them straight in the eye; small businesses being crushed by big money, Tut-Tut's abuse by his uncle, Ashanti's former model mother's mental state.  Realistic depictions of life in a big city and the varied inhabitants heightened the suspense as well as the characters strengths.

Zap!  A shock hit me, passed through my hand, into my wrist.  The silver heart fluttered again and then went still.  So did Pendleton.  He stopped barking and snarling and after a few seconds raised his head and looked kind of confused.  Then he rolled over and lay on the sidewalk, all four paws in the air, his posture when he wanted his stomach scratched.

Ding.  A soft, quiet ding, a familiar sound I couldn't place for a second, and then did.  It was the signal made by an elevator just coming to a stop.  After that one ding:  silence.  Maybe this was one of those times when an elevator stops at a floor for no reason, opens and closes its door, and goes away.  I listened my hardest, hoping for more silence.  And yes! My hopes were answered. Silence and nothing but sweet, sweet-----But no.  A footstep sounded---the hard-heeled footstep of a businessman's shoe---and then more:  clack clack clack.

Blistering action, spot-on dialogue between characters, four teens with newfound powers tackling a classic social issue combine to make Robbie Forester and the Outlaws of Sherwood St by Peter Abrahams a striking beginning in what promises to be an engaging series.
Posted by Xena's Mom at 6:47 AM