Since the 2002 publication of her first picture book, The Sea Chest illustrated by Mary GrandPre, I've been following author Toni Buzzeo.  Her titles about libraries and librarians have found spots on my personal shelves.
I can not imagine a library under my care nor the shelves in my home, for that matter, not being filled with titles illustrated by Caldecott Medalist, David Small, winning in 2001 with So You Want To Be President? by Judith St. George, and Caldecott Honoree for The Gardener written by Sarah Stewart, his wife, in 1998.  A huge poster of an illustration by Small from The Library written by Sarah Stewart will always have a place on the wall in my home.

To my delight Toni Buzzeo and David Small have collaborated on a title that was released January 10, 2012, One Cool Friend.  Readers will come to realize through the narrative and illustrations that more than one definition of cool is present in this book. 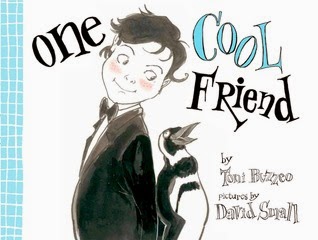 In fact, unless daily circumstances dictate otherwise, he is most appropriately and usually attired in a tuxedo-like suit, bow tie firmly in place.  On a Saturday morning at his academic, professorial father's suggestion, Elliot reluctantly but politely agrees to attend Family Fun Day at the aquarium.  Relaxing on a bench National Geographic magazine at the ready his father urges Elliot to have fun.

Avoiding the mobs of kids, Elliot is drawn to the hall's end in the aquarium, home of the penguins; so much like Elliot in appearance.  About midday Elliot returns to ask his father if he may have a penguin.  Looking at a display of fuzzy toy penguins, Elliot's father replies handing him a twenty-dollar bill, "Sure".

Without further ado Elliot pops the smallest live penguin in his trusty backpack.  Dialing down the air conditioning in his bedroom to frigid, Elliot and the newly named Magellan begin to bond; skating on an ice rink in his room, visiting the public library, raiding the freezer for food and a swim for Magellan in the bathroom tub.  That watery dip ends in a huge exclamation and a most delightful surprise.

Toni Buzzeo's use of deliberately chosen language to convey the storyline engaging readers with hints of humor and word play is simply perfect.  Elliot will say one thing and his father will take away a completely different meaning.  In a review and interview Anna Boll: Book Review Wednesday:  One Cool Friend-One Cool Contest, Buzzeo talks about the writing process in general and the specifics of this book.  The interview also includes remarks about her collaboration with David Small.

After multiple readings all I can say is the use of pen and ink, ink wash, watercolor and colored pencil by David Small is brilliant.  Soft, warm black and white illustrations with splashes of color, chilly light blues, a lime plaid suit for the father, rosy cheeks for the two, a red backpack for Elliot, green garden hose, a marvelous skating outfit for Elliot, add to the nostalgic feel of this story as does the grand home and furnishings where the two reside.  His sense of humor, his extension of the text, is down right hilarious particularly evident in the characters' eyes.  Other touches such as a child running panic-stricken crab pinching her finger from the tide pool exhibit, the shark watching Elliot smuggle the penguin out in his pack, Elliot's bed filled with toy penguins, the penguin himself animated and happy-go-lucky, speech bubbles around the characters' conversations and thoughts and those oh, so, subtle hints at the unexpected conclusion contribute to the anticipated chorus of "read it again, please, please, please".

I cannot think of a better tale to introduce a unit on Caldecott Medalist David Small, the value of friendship, word play in narratives, or the study of penguins.  One Cool Friend by Toni Buzzeo with pictures by David Small is as we used to say "real cool"; it excels from beginning to end.
Posted by Xena's Mom at 7:10 AM