Home Is Where The Heart Is

You've heard the buzz, read the interviews and reviews but when finally holding a much-awaited book in your hands for the first time, it's never the same---it's so much better.  Ed Young's The House Baba Built: An Artist's Childhood in China, released October 3, 2011, is an eloquent representation of his very unique and personal illustrative style.

My shelves at home hold these titles, The Rooster's Horns:  A Chinese Puppet Play to Make and Perform, I, Doko: The Tale of a Basket, Mouse Match, The Sons of the Dragon King, The Lost Horse:  A Book-and-Puppet Set, and Voices of the Heart all written and illustrated by Ed Young, winner of the Caldecott Medal for Lon Po Po, Caldecott Honor awards for The Emperor and the Kite and Seven Blind Mice.  His title Wabi Sabi was on the New York Times Best Illustrated Children's Book list in 2008. 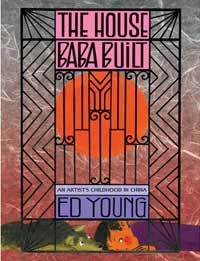 Ed Young's father, Baba, educated in the United States at the University of Michigan as an engineer, feared for his family as war moved closer to Shanghai in the 1930s. The safest site to build a house was on the edge of town, property too expensive to purchase, adjacent to the fields by the embassies.  Baba bargained with the landowner promising to build a huge brick home with a swimming pool, gardens and courtyards which, if they could live there for twenty years, would become his.

While the walls in this three-story house, eventually becoming home to four families, are not talking, Ed Young is. (His words are told to author Libby Koponen.)  Born in 1931, Ed, his brothers and sisters, Ma and his father moved into the house Baba built four years later.

Readers are privy to the inside scoop, the sharpest memories pieced together, by Young; swimming in a pool, one of three in the entire city maintained by forming a swimming club with other families, endless hours of make believe, dancing, adults clustered around the short wave radio listening to the latest news, roller skating on the roof, movies with Johnny Weissmuller starring as Tarzan (oh, how I remember those, too, but seen on television come Saturday morning), weekend dinner parties with the Lings, distant cousins, and the inevitable interaction with his siblings, watching silk worms spin and grow and cricket fights.

Ed recalls drawing in his textbooks more than studying them which lead to tutoring by his brother, Hardy.  When Baba read to his sister Fifi for her reading class, he loved those classic adventure stories so many still enjoyed today, Treasure Island, Robinson Crusoe, Robin Hood and The Three Musketeers.

The pool was not only a gathering place for swimming but the site of his favorite picnic and when it needed to be drained for lack of funds, full of fall leaves, it was a place to ride bikes and scooters.

As the war invaded other cities, his Aunt, Uncle and two grown sons moved into an apartment that Baba built for them on the roof. One of the sons, Sonny, is a favorite of Ed's; remembered for his drawing skills and keen sense of humor. The children's bedrooms became another apartment for a German refugee family with a young daughter named Jean that Ed, his brothers and sisters treated like a younger sister.  When Ed's oldest sister, Mimi, becomes engaged a bridal suite is added to this house Baba built.

Before the war end celebration, the bombing was moving closer to the families in the Young home.  One recollection of Ed's is all gathering in the hallway, where Ma rang the dinner bell, to wait out a bomb threat entertained by Baba's stories.  It was the only place in the house without windows so they could still use lights.  We read:

I knew nothing could happen to us within those walls, in the house Baba built.

He goes on to to say in creating this book discovering Baba had built the house with double-tiered brick walls and eighteen-inch thick concrete slabs on the roof in order to make that very hallway bombproof.

As we look at the book jacket around the cover we see a boy (Ed) and a dog peeking beneath a gate; moving to the back we readers are looking behind them as they peer under that gate.  The book covers, taken from pages in the book, are different than the jacket; the front cover is a picture of the house and the back cover is of Baba drafting the plans for the home, tools in his hands flocks of crows in the background.

War was spreading to Shanghai, my father said, like the crows that came in summer and covered the sky with blackness.

Front endpapers in taupe and white are a street map and a sepia-toned portrait of a family gathering is on the back endpapers.  When illustrators take the time to have a jacket, covers and endpapers that are different, each with a specific visual, it's as if the story starts before the first page is turned; an invitation that cannot be ignored.

This homage to the heart, mind and foresight of his father, Baba, done in mixed media collage is a treasure trove of scrapbooked memories illuminating the passage of people within the walls of this house, good times had among the hard times of war.  Eight different pages fold out to expand the illustrations enhancing the memory; strengthening its importance.  It boggles the mind to imagine the amount of time needed to create this beautiful array of visuals using cut-out photographs and pictures, drawings, paintings, textured scraps of fabric, woven mats, papers, postcards, and holiday decorations filled with and surrounded by vivid, rich, dark colors placed lovingly on these pages with the masterful eye of a true artist.

The House Baba Built:  An Artist's Childhood in China by Ed Young is a memory book, a visual timeline, of people, events and day-to-day activities of a boyhood to be remembered; a story to be shared.


By following the link attached to the title at the beginning of this post Resources For More Information and an Educator's Guide can be found.

An  Interview with author and illustrator Ed Young at PaperTigers.org is well worth reading.  There is an outstanding video interview at the BBC News Magazine where the process used to illustrate this book is visualized.
Posted by Xena's Mom at 6:02 AM