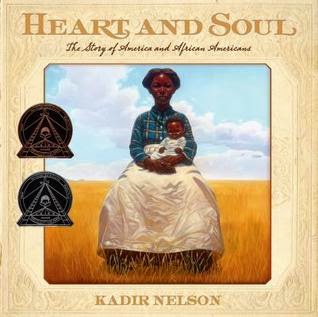 To the best of my knowledge author/illustrator Kadir Nelson has been winning awards for the past eight years for his writing and illustrations evoking truth and realism. Beginning with a Coretta Scott King Illustrator Honor Award for Thunder Rose written by Jerdine Nolen in 2004 and culminating this year with the Coretta Scott King Author Award and the Coretta Scott King Illustrator Honor Award for Heart and Soul:  The Story of America and African Americans; at least eight other awards in between.  The name Kadir Nelson has become synonymous with the highest order of excellence.

Let me begin at the beginning.  This is the dedication written by Kadir Nelson.

For my family:  the Reaveses, the Pittmans, the Nelsons, the Hardys, the Wrights, and the Gunters; and for every American family whose invaluable contributions and stories have helped stitch the grand quilt of these United States.

The prologue introduces readers to the voice of an elder African American woman speaking to a child; asking for her attention... to listen, to hear of the good times and the bad times. Their history, the African American history, is America's history.

You have to know where you come from so you can move forward.

Readers walk with the two through the rotunda of the Capitol gazing at the historic paintings none of which depict any African Americans but the truth is that as long as Europeans have been here so have they.  As the subsequent pages are turned time flows back to the American Revolution moving forward through twelve chapters concluding with an epilogue, the election of the first African American president, Barack Obama.  It is told with a quiet dignity never faltering when disclosing the stark realities of slavery, the thankful rise of abolitionists, the realities of the Civil War and the Lincoln presidency, the dark years of Reconstruction, the settlement of the West to make a new life, the Great Migration north and the injustice of Jim Crow, the uplifting Harlem Renaissance, the struggle for women to vote, the economic woes of the Depression and World War II, African American movers and shakers whose ideas changed our everyday lives, and the Civil Rights movement.

As each successive period is revealed to the reader, many times through a recounting of the life of a member of the elder woman's family, or in the relating of landmark personalities who lead, the perseverance, the pride, the greatness of people such as these is set forth in all its magnificence.  Kadir Nelson as an author has a way with words breathing life into the past bringing it to the present; an intimacy that is astounding.  Make no mistake, everyone who reads this book is that child listening intently.  Here is an example near the end of the chapter, Hard Times and World War II.

When most tank battalions lasted only seventeen days on the battlefield, the 761st, an all-black unit, fought for one hundred eighty-three days straight, longer than any other battalion in the whole war.  They helped win the Battle of the Bulge.  And I'm proud to say that both of my brothers were right there with them, giving it to the Germans.  But would you believe that after all the fighting they did for the country, the black soldiers were mostly ignored?  White units got their medals during the war and were even commended by the president while our soldiers weren't honored until several decades later.

Kadir Nelson's illustrations, forty-eight in total, most single and some double page spreads (not including the front cover), are simply stunning.  The richness in color, the play of light on the people's faces, the captured moments in time combine to create oil paintings with the trick of an eye or the click of a switch could spring to life.  The portrait opposite the prologue page, a younger version of the narrator dressed in Sunday-best, and the cupped, wrinkled hands of her elder self holding a red, white and blue I Voted button opposite the epilogue page speak volumes.

The solemn, Frederick Douglas gazing into the distance as if he can see a future laid before him, Harriet Tubman determined, strong hands grasping a walking stick, against a cloudy sky white birds taking flight in the distance, a young woman her hands upon her father's shoulders teaching him how to read in a small room, piles of cotton on the wooden floor, a school teacher standing on the porch outside her doorway bell in hand, a slight smile playing across her face, workers in a munitions factory American flag hanging in the windows, or courageous children standing strong in Little Rock, Arkansas are eloquent; the very pieces in the grand quilt of which Kadir Nelson spoke.

Heart and Soul:  The Story of America and African Americans words and paintings by Kadir Nelson is a book for each and every American to read and most importantly to share; a story told by a master in every sense of the word.

An author's note, timeline, bibliography and index conclude this volume.  I encourage you to explore Kadir Nelson's web site referenced above with a link to his name.  In his news he states that the original paintings from his award winning We Are The Ship can be viewed at the Eric Carle Museum beginning February 7, 2012.  What a sight that would be to see.

At the publisher's website you can view an excerpt from the book.

NPR Books, All Things Considered conducted an interview with Kadir Nelson, 'Heart and Soul':  An African-American History on September 26, 2011.  It is well worth reading.

Below is Kadir Nelson speaking about the process involved in bringing Heart and Soul:  The Story of America and African Americans into our lives.