With each season, each holiday there are those books that are read again and again; they are as much a part of perennial traditions as are those more commonly observed.  Two of my prized Thanksgiving titles are The Greatest Table: A Banquet To Fight Against Hunger written and edited by Michael J. Rosen and Simple Gifts by Chris Raschka.  Both are more than ten years old but still hold freshness and meaning as if they had just been published; classics to the core. 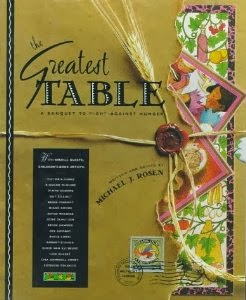 In 1994 Michael J. Rosen and Share Our Strength, one of the nation's leading non-profit organizations dedicated to ending childhood hunger by 2015, together featured the illustrations of sixteen guest artists as they pictorially portrayed a poem written by Rosen.  The volume is attractively crafted with a hardcover slip case in which the sixteen leaf fold-out book is housed; the leaves representing those of a table around which we are all invited.

Across the double title page a host of people, all ages, all nationalities, each carrying food are in motion toward the table.  Richard McGuire is the artist.

The greatest table isn't set
inside a single home---
oh no, it spans the continents,
and no one eats alone.

Beginning with five stanzas four lines each, Rosen welcomes and explains. The renowned Patricia Polacco pictures a homey dining room scene with her Babuska and four children, representative of a blending of cultures, seated together ready to enjoy a meal.

In closing are two stanzas:

The next time you sit down to eat,
the greatest table's set,
connecting you with each of us
who hasn't eaten yet.

So if you're hungry,  join us here,
pull up another chair.
We'll all scoot over, make more room;
there's always some to spare.

Complimenting this closing using a two-page spread Floyd Cooper portrays an Asian group of varying ages kneeling on mats, hands resting on their laps, attired in the formal wear of their country about a table filled with dishes of noodles chopsticks on each.


Simple Gifts is a song of the Shaker people.  It is best remembered as a hymn but many believe that it was to be sung quickly, cheerfully as a dance tune. Chris Raschka lends his own illustrative 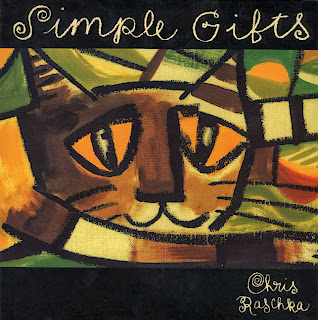 interpretation in a title of the same name in 1998.

Hand-lettering the lyrics (which I believe is inviting and adds intimacy), using oil crayons on pastel paper Raschka brings bold, full double page spreads to each line of the song.  Heavy black lines are filled with every tone and hue reflecting the autumn time of year; comfort and warmth radiate off the pages.   He chose a joyful cast of characters, a cat, a blue jay, a squirrel, a turtle, and a rabbit, to lead readers across the pages.

He finishes with a short explanation of Simple Gifts followed by the music and lyrics.


Bringing us beauty, magic and meaning, children's book illustrators are something to be thankful for not only today but always.  For their gifts to all of us I am, and will continue to be, grateful.
Posted by Xena's Mom at 6:55 AM