Really See Everyone Just As They Are

I continue to be touched by the words and illustrations of Peter H. Reynolds. His newest title, I'm Here, is about compassion, understanding and connecting with those in the autism spectrum; actually with anyone unlike who we may be.  He is gently inviting us to step outside ourselves.

Can you hear it?
Voices.
Splashes upon splashes of sound. 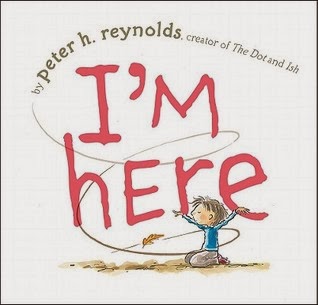 He introduces readers to a young boy by showing a playground filled with talking, laughing, rope jumping, swinging, ball throwing, marble playing children; the boy is off to the side kneeling with his hand over his ears.  All that noise is like a huge, thumping calliope. He feels removed from them, isolated.

They are there.
I am here.

The boy much prefers the gentle breeze that caresses his head dropping leaves next to him.  He is grateful and inventive when a piece of paper floats next to him. He believes the paper would rather be somewhere else.

After much folding the paper becomes an airplane that the boy imagines takes him beyond the clouds higher into the stars; stars which make noises like those on the playground.  But soaring in the heavens gives him a freedom to shout joyfully about his individuality and importance as a human being.  As he rides the air he comes gliding downward where a group of children catch him, running happily to send him skyward once again.

When the boy looks again the plane has come to rest on the playground.  It is discovered by a girl who did notice the boy; bringing it to him holding it out as a offering.  The girl, paper airplane and boy are exactly where they need to be.

Reynolds illustrations rendered in pen, ink, watercolor and some digital color are carefully placed surrounded by liberal use of white space.  Each visual exudes warmth, an innocence of childhood and ultimately the extent of their perception; you want to hug them all.  Alterations in text size reinforce emotions and thoughts.

I can not think of a single person young or old who has not felt at one time as does the boy in this book.  What this tale reminds us is his isolation should be noticed; we need to seek out those alone making them a link in the chain of humanity. Peter H. Reynolds has offered us a simple, definitive story that is touchingly beautiful; its message lingering in our hearts.