I carried my sock monkey everywhere, we were inseparable.  (I still have him saved; loved to pieces nearly and after all this time, clearly fitting into the category of antique.)  I guess that's why it is so easy for me to identify with Willy in I Must Have Bobo!  Eileen Rosenthal, in this title, her debut as a picture book author, has penned a timeless story of that unique bond between a child and their stuffed
animal friend. 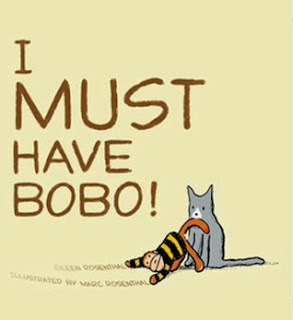 As soon as Willy hops out of bed in the morning, something is missing, Bobo.  Arms uplifted,  spread wide he loudly exclaims:

Bobo helps him figure out whether a bug is friendly or not.  Bobo is fearless on the playground and walking past the big dog behind the fence.  Willy can not function without Bobo.

But then, yes, there is a tail peeking out beneath the covers.  Lifting them, Willy discovers Bobo held in the arms of Earl, the family cat.  Carrying Bobo safely in his arms, Willy heads to breakfast unaware of the look of disgust on Earl's furry face.

As Earl calculatingly observes from the sidelines Willy relates to readers what Bobo does and does not like; in fact it is what he does and does not like.  Readers watch as that rascal Earl sneaks up grabbing Bobo by his tail pulling him away from Willy.  HEY EARL!  Fiddlesticks, caught again.

Waiting patiently as only a feline can, Earl seeks another opportunity to nab Bobo and does just that.  Willy seeks high and low for the pair.  What Willy eventually does discover is that, perhaps, he is not the only one in need of companion.  Who indeed will have the last laugh..er..hold on Bobo?

Drawn in pencil and digitally colored illustrations pop out in shades of primary colors on heavy creamy yellow pages.  Marc Rosenthal, Eileen's husband, has several children's books that he has both authored and illustrated to his credit as well as illustrating titles by other authors.  Here his art is distinctive, simple but descriptive.

In the beginning when Bobo is first missing three thought circles come from Willy's mind as he shouts out.  On the next three pages those thought circles are enlarged as canvases for the three pictures of why Willy needs Bobo.  Readers will note that the author and illustrator names on the cover appear as drag motion lines for the arms of Bobo. So too is the publication information across a double page spread as Bobo disappears off the right edge of the page.  Attention to detail is everything.

The thick sketchy brown lines not colored (only the characters have color) add to the nostalgic feel of the visuals complimenting the brown text; except when large black block letters are used to show anger in Willy and tiny black letters are used in a speech bubble for Earl.  Marc Rosenthal is accomplished at conveying so much with subtle shifts of his pencil.  Readers know exactly what Willy and Earl are thinking and Bobo has that same tolerant expression that sock monkeys wear so well.

The jacket flap states that this is the first collaborative project of Eileen and Marc Rosenthal but the polished, pleasing results are indicative of two minds that think as one.  I Must Have Bobo! is as comforting as your cherished stuffed friend and its effects will have you smiling long after the cover is closed.