Baby Knows All, But Who Will Listen? 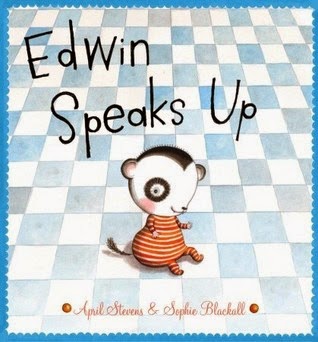 April Stevens, author of the adult book Angel, Angel and her debut children's book, Waking Up Wendell, ventures yet again into that realm with Edwin Speaks Up.  Her delightful take on an everyday occurrence has been luminously illustrated by Sophie Blackwell.  Their match in this endeavor is as they say "made in heaven".

Mrs. Finnemore is attempting to run an errand to the grocery store.  Her five ferret children are at the ready but the keys to her car seem to have disappeared.  Within a speech bubble and as part of the narrative we read Baby Edwin's words.

Sure enough, in Fergus's shoe on the hall table is the resting place of those car keys.  As she tries to load the crew into the car amidst all the she said, he said sibling squabbling, Edwin babbles again.

During the car ride she reminds the children that they absolutely must not forget the sugar for Edwin's birthday cake tomorrow. Imagine her dismay upon arriving at Fineson's Fine Grocery when she believes she has forgotten her pocketbook.  No one listens to Edward chattering away; he's a baby, he can't talk.  But they do listen to Mr. Caruso who comes over to point out the pocketbook on top of the car roof.

Decidedly distracted and the virtue of patience Mrs. Finnemore, with Edwin "talking" nonstop seated in the cart, begins her shopping as the four other children proceed to tussle and scamper throughout the aisles.  Edwin gets left behind as Mrs. Finnemore grabs the wrong cart, the all-important sugar is placed in that wrong cart, and without Edwin sneaking from the reclaimed cart to the shelves no sugar would have been on the belt at check-out.  True to form all the children are loaded back into the car for the trip home but where are the groceries, where is the sugar?

Stevens manages to convey the confusion, the work on a parent's part and the frantic fun of this family's excursion to the market.  The whining, complaining and shouting of Finney, Fergus, Franny and Fiona coupled with Edwin's baby-talk is hilariously typical.  Everything in this narration is so normal one can not help but laugh out loud. Her use of the letter "F" lends a lilting alliteration to the narrative in addition to placing Edwin in the limelight.

Sophie Blackwell begins her charming illustrations on the front cover with Edwin sitting right in the middle of a checked floor that takes us back in time; that floor motif is continued on the back cover as portions of the other four children are seen running pell-mell through the grocery store.  Her endpapers done in alternating diamonds, using the floor color scheme, foreshadow events in the title picturing the pocketbook and box of sugar set in scalloped ovals within those diamonds.  A flip of the the page brings readers to a double page spread of the Finnemore family home, yard, play equipment, garage and the old huge blue car straight out of the 1950s.  Careful readers will see four ferret tails peeking out of places scattered throughout this title page illustration.

Blackwell's use of Chinese ink, watercolor, and gouache pleasingly presents the Finnemore clan clad in clothing from days gone by, a grocery store from that same era and automobiles in the parking lot so well that it's as if we are peeking into a time capsule.  Her selection of colors evoke nostalgia as well as enhance the continued jokes readers will see in this journey.  Her extension of the narration such as a brother sticking out his tongue at a sister, the kids wrestling in the car when Mrs. Finnemore sees her pocketbook on the roof, the children going through all the candy displayed in the check-out lane and Baby Edwin looking right at the reader when the Finnemores think he is talking about an ice cream flavor, but we know differently, are the perfect partner to the text.

Edwin Speaks Up by April Stevens is an enchanting, heartwarming look at a baby who knows more than his family can fully understand illustrated by Sophie Blackwell in her scrumptious signature artwork.
Posted by Xena's Mom at 7:00 AM