Adventure On The Ocean Blue

Many, many years ago in Schuler's Bookstore (my old stomping grounds) located in Okemos, Michigan I had the distinct privilege to meet and listen to esteemed author, Richard Peck.   What he had to say was delivered with wit and intelligence; the rest of the audience and I were hanging on his every word.  I have never read any of his numerous titles that I did not completely enjoy no matter the genre.  His most recent book, Secrets at Sea (Dial Books, October 13, 2011) is no exception. 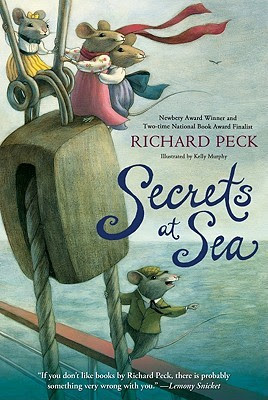 Helena, the oldest of four siblings, snippy, skittery, know-it-all Louise, mooning about, mild-mannered Beatrice and Lamont who attracts trouble like honey does bees, is about to make a decision that will change all their lives forever.  Having lost her mother and two sisters Vicky and Alice in an untimely rain barrel accident and her father in an attack by the barn cat,

She was kill-crazy, of course.  Cats are.

Helena is trying to do the best for her family; to keep them together.  Having been among the First Families in the Hudson River Valley there is a sense of history and proprietary that needs to be maintained.

Of course Helena, Louise, Beatrice and Lamont are mice but what happens to their humans, the Upstairs Cranstons, affects them.  It seems that the Cranstons, who are not known for their social graces nor particularly well traveled (they rarely leave their home), are about to take a voyage across the Atlantic to England.  They are giving their eldest daughter, Olive, her chance.  No young man ever calls twice so they are expanding their options.

Initially unable to make a decision Helena pays a call on a mouse that looks older than time, Aunt Fannie.  Aunt Fannie's wisdom and ability to see the future in her crystal ball, a discarded human's marble, are uncanny.

"Everybody has two futures," Aunt Fannie said.  "The future you choose. Or the future that chooses you."

The visit seals their fate.  They are going abroad with the Cranstons by snuggling into a trunk.

As Helena observes on more than one occasion:  The world is a sudden place.  Aboard ship their universe expands beyond anything they could have imagined; an existence within the hierarchy of humans mirroring events.  Surprises abound among both worlds as family dynamics shift and change, an array of additional unforgettable characters are introduced and the ship moves closer to history, Queen Victoria's Diamond Jubilee.

Richard Peck's skill at portraying the world of mice and human items lost or tossed becoming their treasure, a thimble, a bowl, a twist of wire, a tiara, a yardstick, a grand table or a scrap of fabric, a gown, is a sheer pleasure to peruse.  Snappy dialogue by both casts of characters, humans and mice, infused with humor elicits burst of laughter.

The Duchess leaned nearer me.  Her breath took mine away.  My whiskers drooped.  (Helena's thoughts on meeting the Mouse-in-Waiting to Her Royal Highness, the Princess Louise, fourth daughter of the Queen.)

Mrs. Cranston, bigger than he, in a gigantic feathered hat, her squirrel-skin cloak, and over that her life preserver, stretched to its limits.
"She'd sink like a stone," Louise muttered in my ear. "That life preserver wouldn't float her hat."
(Helena and Louise watching as a life boat drill is taking place.)

Descriptions of time and place, immediate and set within chronological boundaries, are polished to perfection.

My ears rose to perfect points.  It was the sound of claws digging into rope, climbing.  A nearly silent scraping, but there's nothing wrong with our hearing.  I froze.  Then above me a dark shadow loomed over the coiling rope, against the starry sky.

The gentleman, booted and spurred, on stamping steeds.  The little old Queen shaped exactly like a teapot, with white feathers in her bonnet.  And with her in the open landau, Princess Helena---the human Helena, and quite a generously built woman.

Kelly Murphy's use of oil, acrylics, gel and graphite in her illustrations offer readers a delightful extension of the narration penned by Peck.  Each chapter heading pictures a port hole window with a variety of views.  By following the link attached to her name several visuals from the book can be seen.

Secrets at Sea by Richard Peck is brimming with suspenseful escapades, wit and humor, spoken and thought, and of course, romance.  Beneath it all runs Aunt Fannie's wisdom, her parting gesture to Helena, of how to hold family together.  Begging to be read aloud, this title needs to be shared and shared often.
Posted by Xena's Mom at 5:08 AM