The Alphabet Never Tasted So Good

Recently browsing through one of my favorite local bookstores, a book resting on the shelves beckoned to me.  Scottish author/illustrator, Alison Murray, has fashioned an alphabet book, Apple Pie ABC (Hyperion, May 31, 2011), that is good enough to eat.  Her take on the classic nursery rhyme is fresh, vibrant, unique and just plain delectable. 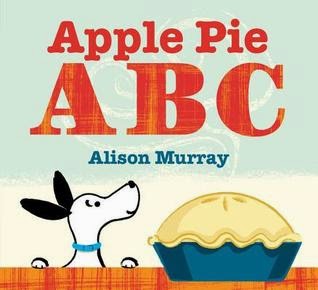 Georgie, a lovable mutt, is on a quest for the apparently unattainable.  His forever friend, Grace, has made an apple pie.  Nothing will deter her canine companion from acquiring that apple pie.

Every letter of the alphabet follows Georgie in his persistent efforts.  A apple pie, B bake it, C cool it, ...N not giving up, O ogle it, P pine for it, ...U underneath it, V very nearly, and W whoops!  Despite Grace's attempts to protect her perfect pastry Georgie's goal is met.  Love for Georgie shines through in Grace's final peek at her best buddy.

It was color that first brought my eye to Apple Pie ABC.  Rich reds radiate throughout the book beginning and continuing with vibrant text. Large blocks of red surround each creamy alphabet letter or they are shown entirely in red.

Murray's endpapers are a collage of squares highlighting A, B, and C with Grace and Georgie silhouetted in opposite corners as ingredients and cooking utensils fill the others.  The title and publication information is laid out across double pages picturing Grace at a table reading a recipe book with Georgie smiling looking up.  Letters A, I and Z are illustrated using two pages while the remaining letters may have a single page or share space with letters; pleasing in its effect but also creating tension as Georgie nears his objective.

Use of orange, blue, golden yellow, spots of pale green and black coupled with the illustrative design bring a warm nostalgic feel to the title. Apple pie is definitely comfort food.  Murray's interpretation of two friends sharing while the one is the creator and the other the consumer is lovable in every aspect; word choices are the kind that roll around on your tongue in joyful anticipation.

In an email request as to her techniques employed in illustrating this book she generously responded as follows:

I mainly work on computer.  First I draw the characters and some of the background objects in Adobe Illustrator.  Then by hand, I create different textures using pastels, paint strokes and various print techniques.  I scan these into my computer and then combine the two in Photoshop.  I think the blotches and happy accidents that you can make by hand humanise the line work drawn on computer.  I built up the image in layers a bit like the process of screen printing but on the computer. You can keep changing the colours till you (are) completely happy with the final illustration.

I see that another book, One Two That's My Shoe, featuring at least Georgie, will be released in 2012; lucky readers one and all.  Sharing Apple Pie ABC with others as a group or one on one is something to be relished repeatedly.  I can visualize a group acting out Georgie's antics as we weave our way through the alphabet toward a taste of that perfect pie.

Alison Murry has a picturesque web site devoted to Apple Pie ABC.   Please see it by clicking on the link at the top.  Offering interesting information and fun activities it is a plus for viewers.
Posted by Xena's Mom at 6:06 AM