More Bears...Can't Get Enough of those Bears

November 14th has been designated as National American Teddy Bear Day.  More than one hundred years ago in 1902 the first American teddy bear was crafted by Rose and Morris Michtom to commemorate an act of compassion by then 26th president of the United States, Theodore Roosevelt. Each year during this week in November students in our library media center focus on everything bears, real, fictional and those that have become cherished friends that we carry and cuddle everywhere.

From a cave in the forest
came a MUNCH, MUNCH, CRUNCH
as Bear and his friends
all nibbled on their lunch. 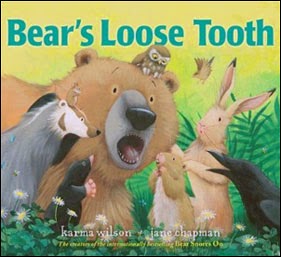 Author Karma Wilson has teamed up again with illustrator, Jane Chapman, to bring readers the seventh book in her Bear and Friends series, Bear's Loose Tooth.  It all began with Bear Snores On, receiving numerous accolades, followed by Bear Wants More, Bear Stays Up for Christmas,  Bear's New Friend, Bear Feels Sick and Bear Feels Scared.  Our big furry chum is back with his woodland buddies, Hare, Mouse, Wren, Owl, Badger, Mole, Gopher and Raven, in a tale that touches on a time to which we can all relate.

Seated outside his cave on the grass Bear is enjoying a midday meal with his forest friends when something in his mouth feels not quite right; that something is wiggling and wobbling.

Concerned about his ability to continue to eat with this troublesome tooth his companions reassure him that a new one will take its place and they each try to remove it.  But that obstinate tooth won't budge until Bear decides to worry it to and fro with his tongue.  Let the celebration begin; that tooth falls out.

Nestled in for the night Bear looks at his tooth placed next to his bed on a plate.  As he dreams a tiny winged visitor leaves him a bunch of blueberries in exchange for his tooth.  Come morning all delight in consuming this delicious delicacy, that is until...

Jane Chapman's acrylic paintings grace the cover, endpapers and body of this delightful story.  Beginning with a scene that spans the front and back covers, to endpapers that once again give readers a view into Bear's cozy cave, a small fire cheerfully burning teapot hanging from his stick tripod, continuing with smaller oval vignettes surrounded by hues of forest greens and blues, and lovely single and double page spreads.  A lush scenic forest frames the characters in their life-like colors making them full of expressive animation.

Friendship flourishes in the forest as Bear adjusts with help to this new life's rite of passage. Readers can most certainly identify with his surprise, concern and joy.  Karma Wilson and Jane Chapman deliver pure charm using spare rhyme and rhythmic text coupled with bright, detailed visuals that completely invite and engage readers.

Bear's Loose Tooth manages to capture that memorable moment when a grinning child rushes up tooth in hand exclaiming, "My tooth fell out!"
Posted by Xena's Mom at 5:08 AM