It Begins In The Chill of Winter But Lasts Forever

As swirls of chilly white spiral through the air and winds howl around the house, how fitting to be holding Making A Friend by Alison McGhee with illustrations by Marc Rosenthal in my hands.  With the onset of winter comes the promise of creating a being from the snow; of having that child at the heart of us become a chief architect, builder and creator.  McGhee's and Rosenthal's collaboration on this title sheds new light on being young, on how the simplest activity can resonate throughout our lives. 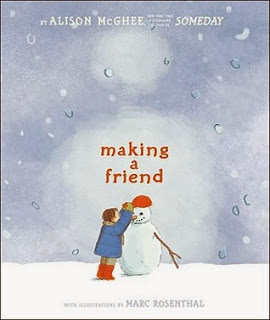 Using single words, a phrase, a group of thoughts or a short highly visual sentence McGhee brings readers into the experience of a young boy as he senses a shift from fall into winter, his dreams are filled with thoughts of it.  Upon wakening one morning to a world of white we celebrate in his wonder, joy and formation of a snowman step by step complete with his own red cap for a topping.  Though the man of snow is silent a friendship is formed.

When the warmth of spring leaves only the stick arms, red cap, carrot nose, and pebble eyes and mouth the youth asks:

Where did you go?  Where did he go?

In subsequent pages he sees him in falling water, rain upon the ocean, fog in the hollow and in the frost upon the panes of a window.

As the months pass it becomes cooler, leaves change color and fall.  Ice appears on the lake, snow drifts down coating his surroundings.  The boy's friend comes back, made by his own hand.  What sets this tale apart is an idea that Alison McGhee introduces during the summer and repeats in the fall and winter,

What you love will always be with you.

Friendships once formed whether that being is visible or not are still friendships.  A bond cemented with love is forever.  A simple joy is not forgotten.  These are the threads woven through the fabric of this charming story.

Pencil illustrations digitally manipulated by Marc Rosenthal bring a timelessness to the story; they could be fifty years ago or yesterday.  Body language and facial expressions leave no doubt in the readers' minds as to what the boy is thinking or feeling.  Using shades of primary colors to enhance his brown line renderings Rosenthal enhances McGhee's narration as well as providing several wordless pages that give his personal perceptive perspective to the storyline.

Attention to detail sets his illustrations apart; during the first snowfall a single window upstairs casts a yellow glow, a snowman's body appears in the clouds.  When the boy missing his friend muses about his whereabouts, his face appears in the ripples of the pond, a frosty square of glass or formed on the ground from cones and stones.  What you love is always with you permeates throughout each visual.

Recall those fond memories of the first snowfall, crafting your own personal snow being and the joy of those crisp, clear days spent in the wonder of winter Making a Friend.  Rest assured that in the capable hands of author, Alison McGhee and illustrator, Marc Rosenthal, that what has been lost is never truly gone.  Revel in their gift of taking less is more to an art form.

Pair this with The Biggest, Best Snowman by Margery Cuyler, Stranger in the Woods:  A Photographic Fantasy by Carl R. Sams, The Snowman's Path by Helena Clare Pittman, The First Day of Winter by Denise Fleming, Snowmen at Night by Caralyn and Mark Buehner or Snowballs by Lois Ehlert.
Posted by Xena's Mom at 6:57 AM