Lost And Found, It Goes Around

There will be times, more often than not, when in a given situation individuals will be expected to act in a specific manner.  Action may be taken as expected but sometimes the best choice, the right choice, is unforeseen.  It is surprising to all those involved. 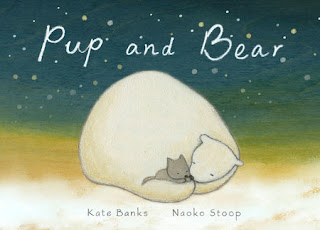 Even in the world of animals there are cases of unlikely alliances, some lasting a lifetime.  Pup and Bear (Schwartz & Wade Books, October 3, 2017) written by Kate Banks with illustrations by Naoko Stoop is a tender story of maternal instincts determining choice.  In the harsh world of the Arctic it can be the difference between life and death.

WHOOSH!
When the great gray owl swooped down,
screeching whoo-whoo,
the Arctic wolves knew that the Big Freeze
was on its way.

Shelter was sought in order to survive the bitter cold, raging winds and snowy drifts.  With the passage of time, the beginning of a new season caused the ice to melt and break apart.  A wolf pup was adrift on a piece of ice, separated from the pack.

After sliding into the water, swimming and swimming, he reached land, exhausted.  Curled up in a ball, he slept.  He was awakened by a polar bear.  She was not the mother he wanted but the polar bear told him to have faith, taking him to her den.  Her promise of food and warmth assured him.

For them it was not all food gathering and snuggling in the den but play and discipline too.  The pup grew into an adult, no longer needing the polar bear.  Another winter came in the Arctic wilderness.  The wolf had his own pack now, no longer alone.  One bitter day this wolf discovered a polar bear cub, alone without a mother.

This was not the mother the polar bear cub wanted but the wolf told the baby to have faith.  Once again a promise of food and warmth was given.  A life for a life . . . was repaid.


As you read the words penned by Kate Banks you become deeply attached to the events unfolding in this story.  The severe climate in the Arctic vividly described and the loss of mothers for the wolf cub and polar bear cub are dangerous situations in which readers will feel an immediate compassion. Kate Banks repeats key phrases and dialogue creating a storytelling rhythm linking the two children and their adopted protectors together.  This is the beauty of this tale; the universe, Mother Nature, supplying a balance.  Here are several passages.

The pup was shy and frightened.
"Aren't you going to eat me?" he asked.
"Polar bears eat wolves."

"Not this one," said the polar bear, shaking her head.
"Climb on my back, and I will take you to my den."


When you look at the front, right, of the unfolded, matching dust jacket and book case, the gentleness of the polar bear female wrapping her body protectively about the wolf cub envelopes you.  The simplicity of this scene is intrinsically powerful. The sky and wintry landscape continues over the spine to the back on the left.  These words are in the sky:

"I am not your mother," said the polar bear,
"but I can cuddle you and keep you safe."

The scene spans to the edges of both flaps.

On the opening endpapers heads lifted and howling to the snowy sky is a pack of five Arctic wolves.  The predominant color is green.  A family of polar bears on a blue and snowy background strides into the snow on the closing endpapers.  The verso and title pages are a soft black.  Blue and white evergreen trees span from side to side.  The text is in white.  This is a stunning presentation.

Naoko Stoop rendered these breathtaking visuals using acrylic paint, ink, pencils, and pastels on plywood, and digitally finished them.  Each page turn reveals a double-page picture, a grouping of smaller illustrations or single-page images.  They enhance the poetic pacing.  Emotions are conveyed in the perspectives employed.

One of my many favorite illustrations is on a single page.  A large frame of white with a blue wash fashions a loose oval border around a small picture.  A blue-green sky blends into a tan and white ground.  Upon this walks the great mother polar bear leaning down to the small gray wolf cub.  It is the ultimate visual of maternal affection.


Author Kate Banks and illustrator Naoko Stoop have given children's literature a luminous look at how creatures protect one another when given the opportunity in the right conditions.  Pup and Bear is memorable and moving.  I highly recommend this title for all collections, professional and personal.

To learn more about Kate Banks and Naoko Stoop and their other work, please visit their websites by following the links attached to their names.  They both maintain blogs in addition to their websites.  Their Twitter accounts are here and here.  To view interior pages in this title visit the publisher's website.
Posted by Xena's Mom at 11:49 PM